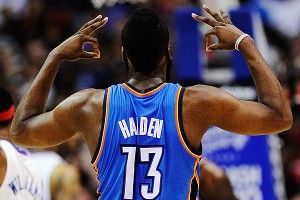 After years of groveling and complaining, I’ve finally weaseled my first awards ballot from the NBA. That’s right, I finally get to pick the Kia Most Improved Player Award. It’s really a dream come true. There was so much pressure that I decided to call my buddy and consigliere, Joe House, to get his advice on the MVP, Rookie of the Year, the All-NBA teams and everything else on the ballot. We ended up getting into a bunch of arguments and I nearly hung up on House three times. We squeezed in a little Caps-Bruins and decided not to talk again until a full week after the series ended, and also went over the results of our NBA “Closest to the Pin” over/under game from before the season. Let’s just say it’s coming down to the wire.

By the way, this podcast lasted so long that we had to split it into two parts. You can listen to this podcast on iTunes or find Part 1 here and Part 2 here.

About Last Night: Taking a Break From World Peace