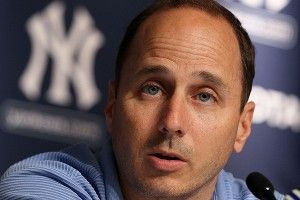 Team revenue is exploding industry-wide. The new national TV deal that takes hold in 2014 will be twice as lucrative as the last one. Teams with favorable regional sports network deals are leading a huge surge in local media revenue. Yet at a time when every team should be feeling flush, one unlikely ballclub has appeared more reluctant to add payroll than any other: the New York Yankees.

With so many other teams showing signs of life, the notion of a penny-pinching Yankees team settling for whatever is left in the dumpster when everyone leaves these Winter Meetings tomorrow lies somewhere between stupefying and impossible. We’ve noted, repeatedly, that the Yanks remain committed to short-term deals at reasonable prices as they make every effort to get under the 2014 luxury tax threshold of $189 million. But here’s the thing, the Yankees could probably run a $275 million payroll, and even after luxury-tax payments, turn in a very shiny profit. That they appear so committed to cost containment, with the upshot of banking an extra $40 million per year in avoided penalties, is admirable, if for no other reason than the sheer stubbornness of that stance.

The Yankees’ latest dilemma that money would seem likely to solve — if they wanted to spend money — is the gaping hole at third base. In the past couple hours, the White Sox agreed to a three-year, $12 million deal with Jeff Keppinger, while the Diamondbacks inked Eric Chavez for $3 million, thereby plucking the player who would have seemed a natural replacement for Alex Rodriguez while the Yankees wait for A-Rod’s hip to heal. Yup, things have gotten so bad for the Bombers that they can no longer afford a few million for Jeff Keppinger or Eric Freaking Chavez. In fact, there’s buzz that the Yankees are listening to offers for Curtis Granderson, since moving his $15 million salary would offer more payroll flexibility to make moves. Yup, a player who has hit 84 home runs over the past two seasons who is owed money for only one more season might need to shipped out of the Bronx for salary reasons.

In reality, this is as much a case of lousy timing for the Yankees as it is payroll restrictions making their lives difficult. The crop of available third basemen was already ugly before Keppinger (coming off a broken leg) and Chavez (who stayed remarkably healthy last year but has been plagued by injuries throughout his career and isn’t nearly the player he used to be) came off the market. You’ve got Kevin Youkilis racked by injuries of his own, with his career looking like it’s nearing a premature end. Mark Reynolds is a legitimate home-run hitter, but he’s so bad at every other facet of the game that he’s a near-replacement-level player. There’s a little more quality available at catcher, with A.J. Pierzynski coming off an unlikely career year and likely available on a relatively short-term deal. The outfield market is deeper, though trading Granderson would mean two vacancies, assuming Nick Swisher signs elsewhere.

The trade market isn’t any easier. Chase Headley is the obvious on-paper candidate, but the Padres have shown no interest in trading him, or would demand a king’s ransom if they did. Nick Hundley at catcher or Drew Stubbs in center could make some sense, but those are complementary players, and the Yankees have enough holes and question marks to make you pine for real star power.

The Jays’ hyperaggressive offseason, the Orioles’ pursuit of Swisher, the Rays coming up in rumors of a three- or four-way trade with Texas, Arizona, and Cleveland … these are all logical moves, made even more logical by the Yankees’ sudden vulnerability. There’s still plenty here, from perennial MVP candidate (except in the town where he plays) Robinson Cano to the return of a healthy Brett Gardner to what promises to be another very good pitching staff, one bolstered by the returns of Mariano Rivera, Andy Pettitte, and the criminally underrated Hiroki Kuroda. But as things stand, the Yankees have one-third of a lineup to fill, no willingness to spend money, and few obvious candidates to upgrade the roster.

These are not reasons to panic, but it’s really damn weird.

More from the Winter Meetings:
• Rays Keeping Up With the AL East Joneses (12/5)

17 Reasons You Should Support the Change to 'New Orleans Pelicans'