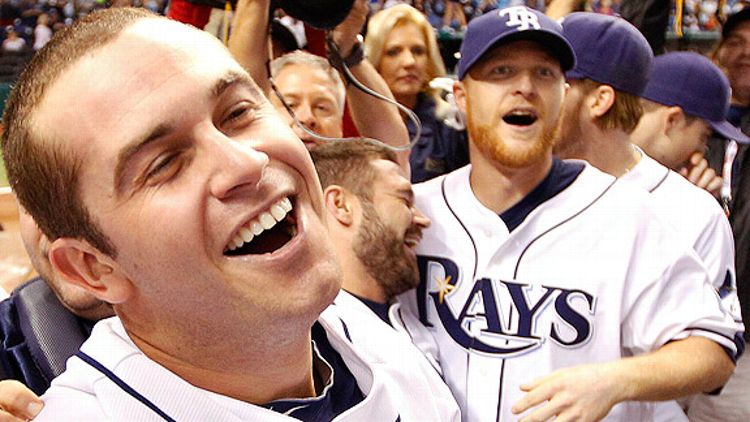 Here’s some trivia to use on your baseball-loving pals: since 2000, there have been 66 playoff series, not counting the 11 World Series. How many of those did the team with home-field advantage win?

I would have guessed 45 to 50. When I asked friends and family, I got similar responses. But man, were we wrong. The answer is that the team with home-field advantage has won 32 of 66 series. That’s 48.5 percent, one game less than half. In other words, a coin flip. Home-field advantage is, in fact, no advantage.

The clever among you will say, sure, but sometimes the wild-card team has a better record than the division winner they face in the first round, so the “better team” doesn’t necessarily have home-field advantage. Fair point. With that in mind, the next question is: how many of those 66 series were won by the team with the better regular season record?

Answer: 31 The overall success rate of teams with a superior record is 31-31 (teams with the same regular season record played four times). Again, a coin flip. Being a better team, at least as judged by the regular season, is no advantage.

The only place where this trend seems to depart is home-field advantage in the World Series, where the team with edge is 12-4 in the wild-card era. But is that significant, or just statistical noise? To figure it out, I looked at the actual games. The home team won sixty percent of all games (51-34), a number far below the 75% winning rate enjoyed by the team with home-field advantage. In fact, the winning team in those 16 years was 37-7 at home (.841) and 27-14 on the road (.659). It mostly just mattered that they were the better team, though admittedly playing at home provided an extra boost.

So what’s my point? My point is perspective. If regular season record doesn’t make a lick of difference at any point in the postseason, and if home-field advantage is irrelevant in the first two rounds and matters just a little bit in the World Series itself, then the playoffs are basically random. Maybe you can draw success correlations with a team’s pitching staff, or maybe there’s something else out there that matters. Maybe. Otherwise, winning the World Series is a matter of rolling an 8-sided dice and hoping it comes up lucky.

If that’s the case, baseball fans shouldn’t get upset at what happens to their team in the playoffs. Instead, they should focus on regular season results.

In my mind, last night was the greatest night of regular season baseball ever. I’m sure Atlanta fans aren’t feeling that way this morning, and ditto for Red Sox Nation. But allegiances aside, the intensity began at 7 p.m. and didn’t stop until after midnight. Game after game delivered on the promise of high drama. And now, with the last dust particles finally settling, the teams that made the playoffs have reached the apex of their season. After this, success largely boils down to luck and streaks and the hot hand.

Full disclosure: I’m a Yankee fan. Right now, I’m beyond thrilled that my team took first place in the American League during a year that looked like it belonged to the Red Sox. Girardi managed the hell out of an uncertain pitching staff and led the team to an almost unbelievably easy first place finish. If he hadn’t taken his foot off the gas pedal, the Yanks probably would have reached 100 wins. We’re conditioned to think of a season as a failure if it doesn’t result in at least a World Series berth, but the numbers above show just how misguided that outlook can be. So I’m taking the time to appreciate the fact that over a full, 162-game season, my team was the best in the AL.

Because starting tomorrow, I think we’re utterly screwed against Detroit. I hate the Sabathia-Verlander match-up in game one. And if that goes Detroit’s way, like it should, we’re counting on Ivan Nova (splendid, but still young) and Freddy Garcia (God help us) to save the sinking ship in games two and three. I hope I’m wrong, but I doubt it. The season will probably end in Detroit with a bitter, bitter taste.

And what I’m trying to say is, none of that should matter. Maybe it sounds like an annoying stat nerd mindset, but why should I care what happens in the playoffs? If it’s random, what control can my team have

I’m no automaton, mind you, so I’ll fail to follow this advice. I’ll be screaming at the TV, refusing to admit defeat, and generally behaving like an irrational human. I’ll be crushed if the Yankees don’t win the World Series. That’s what makes this stuff great. But still, when the end finally comes, I’ll remind myself to regain perspective. The numbers provide solace.

Same for Tampa Bay. Even more so, really. What they accomplished is nothing short of a miracle. Yes, it took an epic collapse from the Red Sox, but that tailspin wouldn’t have meant anything if Tampa didn’t win 17 of their last 25 games. Or if Dan Johnson’s divine home run in the bottom of the ninth, with two outs and two strikes, hadn’t hit the foul pole and saved a season. Or if Evan Longoria, the face of the franchise, hadn’t hit two clutch home runs to narrow the devastating 7-0 gap and finally win it in twelve.

Embrace the moments. Embrace the regular season. If you want get all zen, love the journey and not the result. Consistency over the long haul is where real greatness lies. What comes next is a thrilling month-long battle that can turn on the smallest incident. I’ve seen a mediocre Yankee team survive against a better club because Derek Jeter ran way out of position to flip an errant ball to his catcher. I’ve seen a very good Yankee team get knocked out of the playoffs because of a swarm of insects in Cleveland. I’ve seen the greatest closer of all time blow two saves in a row against a cursed rival, and I’ve seen us become the only team in baseball history lose a 3-0 series lead. I’ve seen a kid change the landscape of an ALCS by reaching down over the fence and turning an out or an extra base hit into a home run. I’ve seen a city rally behind a team and will them to three improbable wins after a great national tragedy, and I’ve seen it come crashing down three days later in Arizona.

When I was 16, I thought I was a real hot shot driver. Every summer day when I left my job mowing grass at a golf course, I’d accelerate through the sharp turns of the winding road leading back to the highway. Finally, one afternoon, reality came calling and the 1994 Oldsmobile Cutlass Supreme spun out. It careened around a bend, twisting and squealing all over the road, and I had no idea what to do with the wheel. In that moment, a truck could have turned the corner and wiped me out. I could have crashed into one of the giant immovable pines lining the road. The end was just an unlucky moment away. Most of us have been there at least once.

And that feeling of helplessness, when I realized I was out of my element and had relinquished control of my life to chance? That’s playoff baseball. The outcome was extremely important, but there wasn’t a single thing I could do to influence it. Maybe I’d come gently to rest against a thick wooden trunk and feel an incredible swell of gratitude. Or maybe, God forbid, it’d be much worse. My conundrum was the conundrum of October.

Do yourself a favor: try not to get caught up in the result.