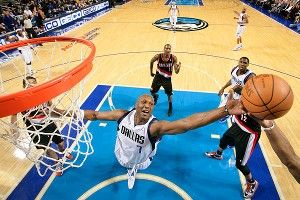 You crazy for this one, Danny! Yeah, it’s early March, Danny Ainge is putting on his clown makeup and emotionally tying up the Big 3 (+ 1) in some warehouse and making them choose which one gets to survive. That must mean it’s Silly Season, a.k.a. NBA Trade Deadline Time. We’ve only got until March 15 for some team to do something very, very stupid. Let’s see which franchises are trying to commit competitive suicide!

Whoever is out there running the opposition campaign against Rajon Rondo should go work for a presidential candidate because they are doing an excellent job of making the Celtics point guard sound like Winona Ryder in Girl, Interrupted. Ainge recently said he anticipates Rondo being a Celtic for “a long time.” And with quotes from “league sources” flying around like, “His value around the league has taken a hit. He’s not exactly the Chamber of Commerce’s man of the year. They’ve been kidding themselves for years. Doc can put an arm around him and give him a kiss and try to make it all better, but that just ain’t happening,” I anticipate he’s right.

Meanwhile, trade rumors are rampant regarding the Big 3. The most compelling one of these is Ray Allen to the Clippers. Let’s go to the Trade Machine.

Trade: Ray Allen to the Clippers for Eric Bledsoe, and Mo Williams.
Trade Machine Says: This Trade is Successful!
I Say: Am I nuts or does this make sense? Let’s say Ainge wants to just hit the button marked detonate. Bledsoe becomes your PG, freeing you up to move Rondo for whatever you can. Williams is a decent addition to the backcourt. Of course trading Rondo and Allen before March 15 will (a) be difficult and (b) give many Celtics fans high blood pressure, but they should be used to that by now. After all, Danny Ainge is the GM of their team.

There is apparently a rumor that Dallas is looking to trade Lamar Odom and his well-played collection of early Cure albums to Phoenix for quasi-prodigal son (and Sun) Steve Nash.

Trade: Steve Nash to Dallas for Lamar Odom and, let’s say … Brian Cardinal.
Trade Machine Says: This Trade is Successful!
I Say: The funniest part about this deal is the tidbit that Odom wants to do this so he can be closer to California. This is insane. Lamar Odom is a multimillionaire with a multimillionaire wife. This isn’t Deadwood. Moving to Phoenix isn’t cutting down on telegram costs. Also? Dallas’ starting point guard for the next 10 years is named Deron. Not Steve.

Dwight! There have been talks. There have been veiled announcements about where Dwight may or may not sign an extension, were he to be traded. Poor Ryan Anderson has even been dragged into all this somehow. But let’s go to the one that seems to be singeing rumor sites day after day …

Trade: Howard to Golden State for Monta Ellis, along with (for the heck of it) Brandon Rush and Chris Wright.
Trade Machine Says: This Trade is Successful!
I Say: I don’t know. I guess there’s a 1-in-100 chance that you trade Howard to Golden State, he falls in love with the Bay, and Steph Curry and Klay Thompson become a devastating starting backcourt. But seeing as how it’s been made rather public that Howard has no interest in being in Golden State, long term, is it really worth losing Monta for a rental?