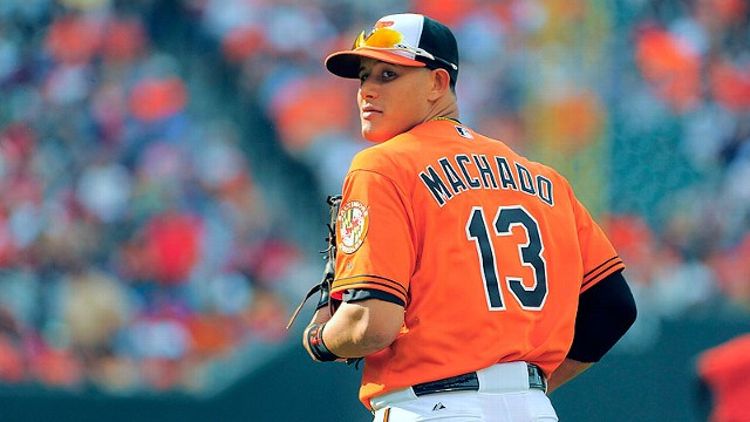 I’ll admit that I spent all last season feeling a combination of bemusement and awe with the Baltimore Orioles. They somehow piled up 93 wins despite a cobbled-together pitching staff and a continued insistence on playing Nate McLouth in an outfield corner for most of the year. They did it on grit, guile, one of the best bullpens in baseball, and a ton of blind luck, and while it was fun for a while, watching the 2012 Orioles was also an exercise in amazement that the other shoe hadn’t dropped yet.

This year, I’m a little more of a believer, because of little things, like Nick Markakis being healthy, J.J. Hardy rediscovering his bat, and Chris Davis, he of the biggest forearms in baseball, turning into Barry Bonds.

But the most encouraging thing about the 2013 Orioles is that they’ll have a full season of Manny Machado.

You’re likely aware of Machado, who was, as of this time last year, that guy who wasn’t quite as good a prospect as Jurickson Profar. Everything about him was celebrated upon his arrival, from his hot bat and smooth defense to his preternatural baseball intelligence, which manifested itself when he deked veteran outfielder Rich Thompson on a play at third base. A friend of mine started using “Manny Machado” as a synonym for “good” last summer. When she purchased a mini-keg of Bell’s Two-Hearted Ale and declared it to be “Manny Machado,” it became official Crashburn Alley style to refer to Machado as “Mini Keg” on first reference.

The first three months of the 2013 season have been good for Mini Keg. Baseball Prospectus, FanGraphs, and Baseball-Reference value him at between 3.0 and 4.3 Wins Above Replacement, which would be pretty darn good numbers for a full-season regular. For a 20-year-old who’s halfway through his first full season? It’s unbelievable. Machado is on pace to demolish even his 90th-percentile PECOTA projection, to say nothing of breaking the major league record for doubles in a season. As we saw last month, his stock is so high that people are talking about him in a class with Mike Trout and Bryce Harper as the best young players in baseball. Not that he’s in that class yet, but it’s not crazy to ask the question.

But you probably know all that already.

The more interesting question is whether we should have seen this coming. Could we tell, after Machado posted a .294 OBP as a rookie, that he would turn into a superstar?

When considering a player’s offensive numbers, context is everything. Specifically, three things:

Let’s break those down, one by one, for Machado.

Put another way, here’s a list of second basemen, shortstops, and third basemen who posted at least a 90 OPS+ in 150 or more plate appearances in their age-19 season or younger. You’ll see a lot of interesting names on that list, including Ted Kazanski, a shortstop for the 1953 Phillies who bridges the nominative gap between the Unabomber and Iceman from Top Gun. But apart from him, that list includes Hall of Famers Robin Yount, Bobby Doerr, Bill Mazeroski, Travis Jackson, and Fred Lindstrom, plus Adrian Beltre, who’s had a better career than half of those guys. Now, there are some stinkers in there as well (one wonders how Sibby Sisti managed to accumulate more than 3,000 career plate appearances) for sure, but the MLB of today has well-developed farm systems, international scouting, more rigorous player-development systems and, of course, players who aren’t white, which cannot be said for, say, Gus Getz. To break into a major league lineup, at a tough defensive position, at as young an age as Machado did, and then to hit at a league-average clip — that’s pretty incredible.

It is, of course, dangerous to prematurely confer superstardom or Hall of Fame expectations on a player who hasn’t turned 21 yet. So while we shouldn’t expect Mini Keg to dominate the game for the next decade, if it happens, we probably won’t be all that shocked either.

The Next Danny Green: Identifying the 2013 NBA Draft's 3-and-D Prospects