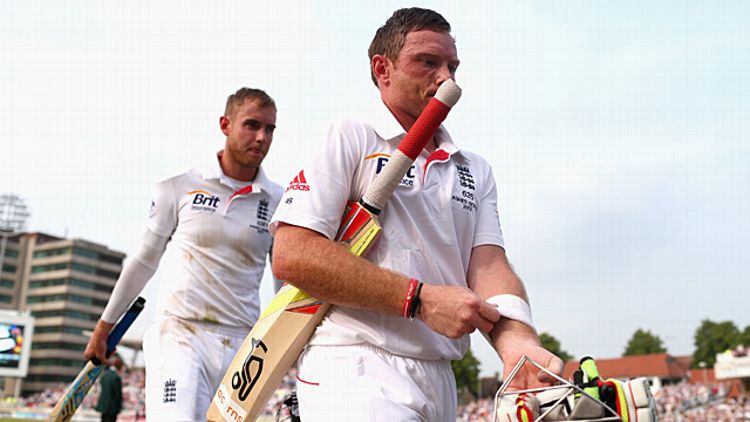 As this summer drags its heels through NFL image issues, a soccer transfer window with a few eye-opening moves, NBA free agency, and 162 games of baseball, you could do a lot worse than the Ashes series until the Premier League head-butts you at the end of August. As England and Australia begin an unprecedented back-to-back Ashes series — 10 Tests split between summer and winter, irritatingly pitched as some kind of world-ending decider — that has already offered marvelous entertainment this week, I plead you to give cricket a chance.

1. It’s the biggest rivalry in the sport

If you’re gonna give cricket a chance, you could do worse than a six-week sampling of its most acidic and animated tête-à-tête. The two sides share a punchy history. England’s infamous “bodyline” stategy of the 1930s. Mild-mannered Jim Laker taking 19 of 20 Australian wickets in 1956. Pretty much anything Shane Warne, a chubby, peroxide-blond loudmouth who looked more like a retired beach bum, did with the ball in hand. Andrew Flintoff’s jolly, Everyman persona earned him free-beer-for-life status as he carried an average England team on his broad shoulders (one of which he’d torn earlier in the game) to beat the robotically rampant Aussies in 2005.

If the idea of Bayern Munich vs. Borussia Dortmund in front of Signal Iduna Park’s “Yellow Wall” could be considered soccer’s current emotional peak, consider that the Poms vs. the Aussies has been that for over a century. Well, minus the chanting and exuberant tifos. It is the apotheosis of a sport that has struggled to keep with the times, forever churning out faster, zippier iterations in a bid to appeal to the iPad and EDM generation. No matter how much you tweak the basic format — 11 vs. 11, everyone bats and everyone can bowl, most runs wins — the Ashes has prevailed. It has suffered several bouts of one-sided misery for both countries — England won the first eight series from 1882 to 1890, while Australia dominated eight straight from 1989 to 2002, going 28-7 — but produced enough genuine drama in the 21st century to rival the ancient Greeks.

2. How much more misunderstood can Jonathan Trott get?

South African–born and U.K.-raised, Trott is a major reason for England’s evolution from hapless joke to legit power. With the uncomfortable angst over his Springbok roots finally subsided — an easy way to discredit England’s cricketing rise would be to check passports — it’s plain to see that he’s classically “English” with the bat.

In Test cricket, you need players who can bat for hours, concentration unblinking, in order to tire out the other team’s best bowlers, weather nasty momentum swings, or simply build a strong platform that your team can defend in the field. Trott is the master of incremental run accumulation, his style akin to the Spanish tiki-taka in that he’ll never be rushed to score. It’s dull, but patience and composure reign supreme. As such, his biggest battle is often with critics who find his approach impenetrable and selfish. In a sport where more creative, dynamic hitters like Sanath Jayasuriya and Chris Gayle are lauded for their carnival hitting, and where quick bursts of runs can demoralize opponents, Trott is anything but.

Yet it’s hard to understate his contributions. The stats are as easy to love — he averages 49.28 runs per inning and 72.55 vs. Australia, herculean in a sport where 40.00 is considered the benchmark of greatness — as he is difficult to watch with bat in hand. Trott hoards every hour, minute, and second at the crease. His obstinacy — watch how he thinks about destroying the stumps after getting out to a lazy shot on Wednesday, a rare burst of emotion and proof of just how highly he regards his job — in grinding out games is precious, but largely unloved by a sporting public so used to watching England beige it up in every sport.

Yet that soporific style is a life-saver for a team still guilty of the occasional collapse. Much as Barcelona needs a Sergio Busquets, England needs Trott’s boring bat, and as he goes (Trott averages 61.34 runs in Test victories), so goes England (27.50 avg in Test defeats). This Ashes series will test that maxim in full.

3. Death comes in many forms

Remember the name Ashton Agar. The gangly 19-year-old is the latest folk hero for a rivalry that has turned ordinary men into titans of the post-dinner speaking circuit. Bounding out to bat at no. 11 on Thursday, the last man standing between England and a commanding first Test lead — all out for 215 the day before, they had Australia teetering on 117 for 9 — Agar’s demise was a foregone conclusion. Lamb, slaughter, etc. But after 101 minutes of cavalier strokes that varied between suicide and style, Agar’s highest-ever score by a no. 11 batsman (98 in a last-man stand of 163 that is now the highest last-wicket partnership in cricket history) had swung the game’s momentum firmly in the underdog’s favor. Not bad for a kid playing just his 11th professional game of cricket.

Watching the highlights, you can sense the palpable dread that eventually settles on England in the field as this kid swats the ball all over the ground. Frustration gives way to begrudging admiration, as his elegance and swagger gave the Aussies a notable psychic grip on the first Test.

It won’t matter if Agar flames out, for his legacy is already sealed. Improbable legends are forged in Ashes crucibles, and for every Warne, Flintoff, Ian “Beefy” Botham, Jeff Thomson, or Sir Donald Bradman, there’s a Dean Headley. Where most sports eventually settle in favor of their quotidian stars, the fact that cricket boils down to man-with-bat vs. man-with-ball allows for all sorts of individuals to unexpectedly shine. It’s already happened once this summer and we’re just three days in.

4. This isn’t your father’s Australia

The Aussies of my youth were a frightening band of assassins, a group that routinely treated the hapless “Poms” with a level of casual dismissal usually reserved for Dwight Howard whenever he’s trying to change teams. Led by a grinning executioner in Mark Taylor, the ’90s were one-sided and grim, as the likes of Matthew Slater, Matthew Hayden, Ricky Ponting, and the Waugh brothers piled up runs against England’s pasty, dough-bellied bowling attack before leaving the likes of Glenn McGrath and Shane Warne to handle matters with the ball. Ashes series were sacrificial and rote in nature. You expected defeat, you just didn’t know by how much.

And yet the touring party this summer is decidedly lacking in icons. Captain Michael Clarke is the last connector to those glory days, but helms a side dubbed the “worst Ashes squad” (keep being you, Daily Mail) in Australia’s history. There’s plenty of inexperience (10 of the 18-man touring party have played fewer than 15 five-day Test matches), plenty of recent mediocrity (two straight Ashes series defeats to England), and plenty of bad behavior to overcome.

If previous Australia squads were preppy, clean-living overachievers, this lot looks like the Breakfast Club. Dynamic do-it-all Shane Watson has overcome the disappointments of leadership (he was in charge for a 4-0 walloping in India earlier this year), bureaucratic absurdities (benched for one game after failing to do team-mandated “homework”), and endless criticism (150,000 Google results for “Shane Watson considering future”) to inadvertently end up as one of the key men in this series. Having scored more Test runs against England than against any other team (batting average: 35.34; bowling average: 1 wicket every 30.06 runs; perfectly respectable), he’ll shoulder a major burden.

Batsman David Warner used his power to allegedly fight young English player Joe Root at a Birmingham nightclub back in June after the hosts beat Australia in tournament play prior to the Ashes. After pleading guilty to “unbecoming behavior” — seriously, only in cricket, right? — and threatened with dismissal, he was suspended one Test to sit and think about what he’d done. This all came a month after he got in trouble on Twitter, the cutting-edge nadir for athlete-journalist relations.

Management has also labored. In the spring’s ICC Champions Trophy, Australia’s failure to escape the group stage caused the firing of coach Mickey Arthur just 16 days before the start of the Ashes. His replacement, the rotund and beloved old-school Darren Lehmann, ought to serve as a rallying point.

With a golden generation just past — Aussies will have watched wistfully as Ricky Ponting, one of the all-time batting greats, hit 100 in his final innings this week prior to retirement — the pressure’s on this ragtag mob to overcome England’s hype, as well as its own obvious shortcomings. Narratives don’t get more crippling or Sisyphean, yet if the past three weeks at Wimbledon are any harbinger, this series is far from settled.

I haven’t checked if there’s a PhD available in trophy studies, but the physical manifestation of this grudge match is worthy of a dissertation. As the legend goes, England’s first loss to Australia on home turf some 125 years ago prompted a satirical obituary for the burgeoning pastime: “In affectionate remembrance of English Cricket which died at the Oval on 29th August 1882. Deeply lamented by a large circle of sorrowing friends and acquaintances. RIP. NB. The body will be cremated and the ashes taken to Australia.”

This epic snark — imagine if these guys had blogs back then — caught the imagination, so much so that when England next toured Australia, captain Ivo Bligh vowed to bring back the “ashes.” Leading a squad rich with Name of the Year candidates — Edward Ferdinando Sutton Tylecote! Allan Gibson Steel! George Browne Studd! — the subsequent victory earned the squad a tiny, terra cotta urn said to contain the ashes of a bail (one of the wooden things a batsman protects). He brought it home and kept it on his mantel (how Downton Abbey!) until his death, at which time Bligh’s wife — oh, yeah, she was one of the Australian women who had presented him with this memento; way to go, Ivo! — bequeathed it to the spiritual home of the sport, Marylebone Cricket Club (the MCC). It was crude, it was quaint, it was intelligent, and over time, this memento grew a mystique that has never been replicated.

Most symbols of victory in sport are exactly like you’d expect: ugly, garish, oversize metal and glass monstrosities that speak to the obvious ego of athletic competition. It’s unbecoming to fight for something that you can’t drop under a bus, maul for the cameras, or pour a six-pack into. The Ashes, like much of cricket, have an understated elegance to them. They weren’t commissioned and they weren’t designed with some multi-tiered brand philosophy in mind; they were constructed as a witty reaction to a joke and have since stuck in the craw of every man to play in this series since. They symbolize the death of the sport!

More leagues should compete for such ironic hand-me-downs. Maybe soccer’s Champions League trophy could be a lightly seared Roman Abramovich bobblehead. The World Series could be a vial of Mark McGwire’s DNA. Imagine! (The Tour de France is fortunate in that the maillot jaune, regal and timeless as it is, shares the color of the urine its competitors must frequently get tested to screen for PEDs. That’s just superb foresight.)

Yet you won’t see many players clutching the factotum these days — it’s simply too fragile. Despite overtures for it to be returned to Australia where it was created, the original is kept in the MCC’s museum, occasionally rolled out for posterity or the odd photo opp. (You can just picture the historians on either side getting in heated letter-writing exchanges over this stuff.)

Though England and Australia now compete for the chance to loft and kiss a more modern crystal-looking thing, every cricketer to represent either side knows the true nature of what’s at stake.