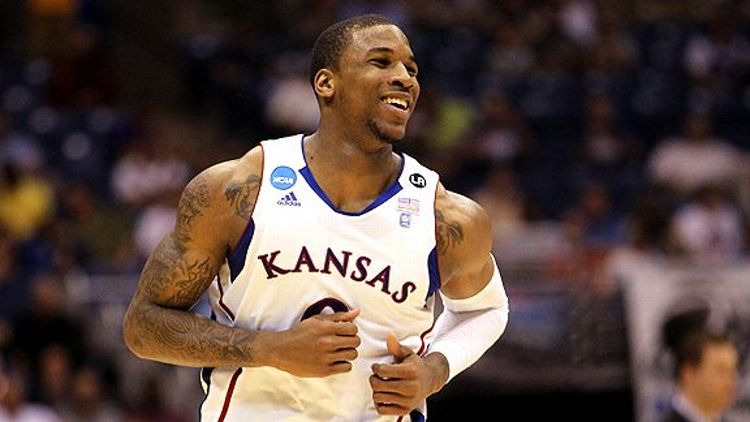 Before the season started, many experts identified Thomas Robinson as Kansas’ key player, noting that there were concerns about whether Thomas could handle all the weight on his shoulders. Last year, Robinson played behind the Morris twins and assumed more of a reserve role on the Jayhawks roster. Five games into the season, the concerns were put to rest, as he has scored in double digits in each game so far, however there are some issues that are starting to appear as well.

On the block, Robinson is shooting 47.6 percent while posting a points per possession rate of 0.84, putting him in the top half of all players in college basketball. Like all effective post players, Robinson relies on positioning.

On this possession, as the ball goes away from him, Robinson starts to follow the basketball and then quickly seals his man, establishing position deep in the paint. Look at where he makes the catch:

Getting position like that makes scoring easier for any post player, especially a player with Robinson’s skill and athletic ability. On this possession, Robinson is able to knock down a hook shot, a shot made much easier with good positioning.

Here is another possession where Robinson’s early work allows him to establish position and makes things easier for himself. As the ball is on the weak side, Robinson is already holding off and sealing his man. This allows Robinson to make the catch right on the block instead of being pushed out by his defender. Once he gets the basketball, Robinson converts on an incredibly difficult move. If he makes that catch a few feet away from the block instead of right on the block, Robinson probably misses that shot, but because of his positioning, he is able to knock it down.

With Robinson establishing such good post position, it forces the defense to try to react to him, and once that starts happening, it opens up other things in the post:

Here, Robinson is working to get fantastic post position against his defender, Ryan Kelly. Kelly knows that he is getting sealed way too deep to be effective defensively, so he tries to front the post, cutting off the angle of the entry pass. This opens up a post pin, where Robinson holds his defender on the high side, making himself available for a pass over Kelly’s head. Robinson makes the catch and is able to get by the rotating defender for the big dunk.

In isolation situations, Robinson is shooting 50 percent while getting to the free throw line on 15.4 percent of his isolation possessions. When isolated, Robinson definitely favors going right, doing so 58.3 percent of the time, shooting 50 percent, and getting to the free throw line 28.6 percent of the time. What makes Robinson so dangerous in isolation situations is that he can do a number of different things depending on what the defense throws at him:

We pick up this isolation possession with Robinson going against a Georgetown defender. As Robinson makes the catch and faces him up, Robinson’s defender backs off of him a little bit, knowing that he has to defend against Robinson’s athletic ability. Here is the possession live, and watch how Robinson reacts to the space given to him:

Robinson turns with the basketball, sees his defender playing off of him, and simply takes what the defender gives him by taking a pull-up jumper.

Because the defense knows Robinson can knock down that shot, they can commit to taking that away. When that happens, however, Robinson is able to use his athletic ability to hurt the defense:

Here, Robinson’s defender is playing up on him, trying to take away the early jump shot. Robinson simply uses the defender’s position against him, going by him, and drawing the foul, getting to the free throw line.

Despite Robinson looking very good offensively, there is one number that should set off some alarms for Kansas fans and NBA scouts alike — Robinson’s turnover rate. In the half court, Robinson has turned the basketball over 16.1 percent of the time. When Robinson starts getting away from his strengths in the post, he starts putting himself in positions that lead to turnovers:

Robinson has already exceeded expectations at Kansas and has grown into his role much quicker than most had imagined. He’s done this by showing patience in the post and executing on his diverse range of skills. If he can stay patient and play within Bill Self’s system, the Jayhawks have an All-American-caliber player on their hands.

Previously by Sebastian Pruiti:
The Problems with Austin Rivers