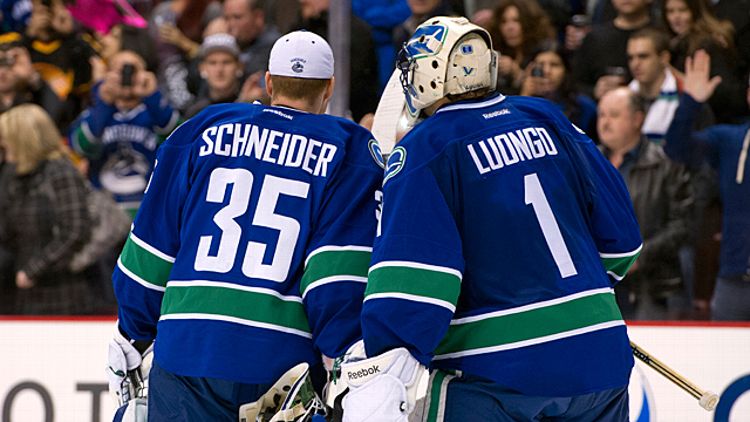 When you look around the NHL, you find several teams with unquestioned no. 1 goaltenders. Barring injury, players such as Henrik Lundqvist, Jonathan Quick, and Pekka Rinne will be starting every big game for their teams all year long, with an occasional break when the schedule serves up an also-ran.

But not every team’s situation is quite so settled. In some cases, the starter’s hold on the job is shaky. In others, two guys are splitting time equally.

Let’s take a look at some of the teams where the title of no. 1 goalie is still up for grabs.

In this corner: Fleury has all the earmarks of an entrenched no. 1: He’s a former first-overall pick, a Stanley Cup winner, and the owner of a big contract with three years left on it. His only downside is that plenty of folks seem to think he’s not all that good.

And in this corner: Vokoun’s a strange case. He was considered one of the best goalies in the league during his years in Nashville and Florida, but never made it out of the first round of the playoffs. He’s spent the last few years of his career signing surprisingly low-dollar deals with Cup contenders — first with the Capitals in 2011, and last summer with the Penguins. He seems to really want a ring, and to be perfectly content to get one as a backup. Or is he?

The battle so far: Vokoun has been easily the better goalie so far. Last week, Fleury was pulled against the Islanders, while Vokoun got the start in the next game and shut out the Rangers. Fleury rebounded with a strong game against the Devils, but it was Vokun who got the start — and the win — in a Sunday-afternoon game against rival Washington.

And the winner is: So far the numbers say it’s been Vokoun, though you have to think the Penguins will be reluctant to make a permanent change given Fleury’s history. Keep an eye on this one as we head toward the playoffs.

In this corner: Ward came into the season as the undisputed no. 1. The former All-Star and Conn Smythe winner had put up good-to-great numbers every year of his career since taking over as the Hurricanes starter during their 2006 Cup run.

And in this corner: Coming into the season, Ellis was arguably best known for briefly becoming a Twitter meme. After two unremarkable seasons in Anaheim, he latched on with Carolina after the lockout to serve as Ward’s backup.

The battle so far: It’s been lopsided — and not in the direction everyone expected. Ward has been awful so far, with a GAA north of 4.00. Ellis, on the other hand, has been excellent.

And the winner is: Ward’s still listed on top of the depth chart. But given all the offseason moves that were supposed to shape the Hurricanes into contenders, you have to wonder how much patience they can afford to have here.

In this corner: Schneider was handed the starter’s job last season after the Canucks got tired of Roberto Luongo’s playoff inconsistency. Once Luongo was traded, Schneider was expected to have the job all to himself. Instead, he’s been splitting time with …

And in this corner: Roberto Luongo, who despite all expectations, is still on the team.

The battle so far: Schneider was awful in a season-opening loss to the Ducks, but has played well since. But it’s been Luongo who’s taken over recently, starting three straight games last week and sporting a 1.46 GAA and .944 save percentage. He looks like his old self.

And the winner is: This keeps getting called a “goaltending controversy,” but that seems like the wrong term. You could call it that if either guy was complaining about splitting time, but both are being frustratingly professional. That leaves the Canucks as a good team that has two good goaltenders, which isn’t really all that controversial. In fact, let’s take this in a different direction …

In this corner: Roberto “@strombone1” Luongo.

And in this corner: Paul “@BizNasty2point0” Bissonnette, who is technically not a goalie but let’s just go with this.

The battle so far: Which player will emerge as the NHL’s consensus best follow, earning the right to automatically get a brief mention in every lazy “pro athletes on Twitter” article?

And the winner is: It’s not even close. We all agree it’s Luongo by a mile at this point, right? OK, just wanted to make sure we were all on the same page on this one. Back to the goalies.

In this corner: Halak made his reputation by being unbeatable during the Canadiens’ stunning 2010 playoff upsets over the Capitals and Penguins. That led to a trade to St. Louis, where he was expected to be the undisputed starter for the long term.

And in this corner: Elliott looked like he was ready to wash out of the league after a sub-par 2010-11 season split between the Senators and Avalanche. Instead, he caught on with the Blues, and went on to have one of the most unlikely All-Star seasons ever, while splitting time with Halak.

The battle so far: Both goalies have put up below-average save percentages (.889 for Halak, .900 even for Elliott), but both have impressive GAAs because the Blues don’t allow many shots. More importantly, the team is 6-2-0 and looking like one of the Western Conference favorites.

And the winner is: Elliott will hold the starter’s job for a few days while Halak recovers from a groin injury, but otherwise this one looks like it will play out like last year — two goalies splitting time, with perhaps a slight edge to Halak.

In this corner: Reimer won the starter’s job with a solid half season of work in 2010-11, then saw his 2011-12 derailed early by an injury. His struggles lead to all sorts of speculation that the Leafs would have to deal for Luongo, but at least for now that talk seems to have gone quiet.

And in this corner: Scrivens has spent the last few seasons playing well in the AHL. He was the Marlies’ starter during the lockout, which allowed him to come into camp sharp.

The battle so far: Scrivens actually earned the first two starts of the season, playing well in a win over the Canadiens and a loss to the Sabres. But he was shelled at home against the Islanders, and hasn’t been seen since. Reimer has started each of the last four, and his .922 save percentage has him in the league’s top 10.

And the winner is: The job looks to be all Reimer’s for now. Oh, and since we’re talking Maple Leaf goaltenders …

The Goaltender’s Heavyweight Championship of the World: Ron Hextall vs. Felix Potvin

In this corner: Ron Hextall, who was pretty much the most intimidating goalie not named Billy Smith in the history of the league. Seriously, he was nuts.

And in this corner: Felix Potvin, who had a reputation as a quiet kid who didn’t cause trouble. He was also kind of nuts.

The battle so far: Technically, this particular goaltender battle happened more than 16 years ago. I just didn’t want to pass up an opportunity to work it into a post. Sorry, Patrick Roy fans, this was the greatest goalie fight of all time.

And the winner is: Flyers fans say it was too close to call. Leafs fans want to know if this looks like the face of a guy who just won.

In this corner: Mason is the incumbent, having started the majority of Blue Jackets games each of the past four years. But after a solid rookie season, he’s been below-average ever since, and last season’s .894 save percentage was ugly.

And in this corner: Like seemingly every goaltender, Bobrovsky eventually wore out his welcome in Philadelphia. He was dealt to the Blue Jackets for draft picks with the expectation that he’d push Mason for the starter’s job.

The battle so far: About as close as it could be. They’ve split the starts so far (five for Bobrovsky, four for Mason), have each given up 13 goals, and are sporting nearly identical save percentages. (Bobrovsky’s is .907, while Mason’s is .906.)

And the winner is: So far, neither guy has been anything better than average, but with their stats so similar early on, this one seems too close to call.

In this corner: Crawford’s been the nominal starter since the start of the 2010-11 season, but has never seemed to really cement that status, despite some decent numbers.

And in this corner: Emery has bounced around since taking the Senators to the finals and then quickly wearing out his welcome in Ottawa. This is his second season in Chicago, and some were wondering if this was the year he finally reestablished himself as a full-time NHL starter.

And the winner is: The Blackhawks, almost every night, as their 7-0-2 record has them holding down first place overall. With the team playing so well, there’s no reason not to keep riding Crawford.

In this corner: Miika Kiprusoff, the only goaltender in the NHL to play every minute of every game for his team so far.

And in this corner: An empty locker with a Post-it note attached to the door reading “Just start Kiprusoff again.”

The battle so far: OK, technically the Flames’ backup is Leland Irving. But considering Kiprusoff has played in 70 or more games each of the last seven years, there’s a non-zero chance that Irving goes the whole season without ever taking his ball cap off. And that’s despite the fact that Kiprusoff has the worst save percentage in the league so far.

And the winner is: Leland Irving. Would you want to play every game for the Western Conference’s worst team?

In this corner: Holtby was the Capitals’ feel-good story of last season, inheriting the playoff starting job due to injuries, despite only 21 career NHL games’ worth of experience. He was fantastic, leading the Caps to an upset win over the Bruins before losing in seven to the Rangers.

And in this corner: Neuvirth headed into 2013 as the backup, but one with a solid chance to win his share of starts.

The battle so far: They’ve split time — five starts for Neuvirth, four for Holtby — and it hasn’t been pretty. Neuvirth has managed only one win and has a save percentage south of .900. But Holtby’s been even worse, with an .862 save percentage and a 4.52 GAA that ranks him at the bottom of the entire league.

And the winner is: Roberto Luongo rumor fans, thanks to a surprise appearance in Washington by Canucks GM Mike Gillis. (That talk has since been shot down.) That leaves the Capitals as a struggling team that’s desperate for a goaltender to steal a win for them. Right now, Neuvirth seems to the guy most likely to do it.