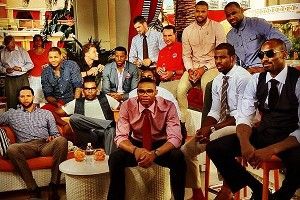 Oh, what’s up, Expendables? This is a still from Wednesday night’s ESPYS broadcast. One by one, shall we?

Kobe. Like, did all those guys say, “We’re all gonna wear sunglasses. Wear your sunglasses, man”? And then they took them off at the last second and Kobe was like, “Screw you guys. I’m out here on the range by myself”? Probably that. Then there’s Deron Williams, who looks like he is really rethinking the khakis and is wearing an expression like he just saw Rosa Klebb coming out of the background with that shoe knife pointed right at him. Blake looks like he has no idea he’s about to do his knee because he probably has no idea he’s about to do his knee; Kevin Love is explaining what Pinterest is to nobody in particular; that’s the only position Tyson Chandler can comfortably sit in; Andre Iguodala has “Once in a Lifetime” playing in his head (“And you may ask yourself, ‘How did I get here!?'”); LeBron is playing “I Don’t Like” in his; Kevin Durant is still pissed off about the Finals; James Harden is The Invisible Man; Coach K is having an interior LOL about Quin Snyder taking a job at CSKA Moscow; Chris Paul is in a Drakkar Noir ad; Carmelo Anthony is making a face that pretty much sums up modern life; Russell Westbrook is daydreaming about Gobots; and who the hell are those white people in the background?

Put this thing on a commemorative plate and sell it to me.