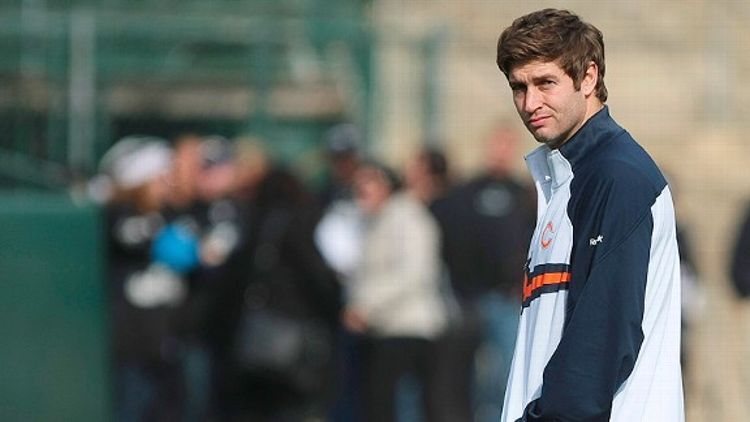 Chicago Bears/Jay Cutler Sports Plaque — $19.95
The idea of having this picture of Jay Cutler displayed above the quote, “For the last time, I cannot flag someone for making you cry,” is one of those ideas that you and your buddies talk about while watching football one Sunday, it’s getting a lot of LOLs around the room, really killing, and then you — being your enterprising self — decide to actually go and get it made. You put it on eBay, and that’s when you realize, zero bids later, that it’s way better in concept than in actual execution. Don’t let this discourage you from taking the bull by the horns, though. “You miss 100 percent of the shots you never take,” said NHL legend Wayne Gretzky, and I’m not entirely sure, but I believe he was referencing this very scenario of commissioning a plaque of Jay Cutler to be sold on eBay.

Brett Favre Sports Illustrated Pewter Statue – N.I.B.- green bay packers 1/10000 — $14.99
Toyota Gator Bowl NCAA Football Iron on Jersey Patch College University Sports — $14.99
Here’s something I don’t get: how are these two things the same price? That’s definitely weird, right? Although, I do like that someone thought it was a good idea to make 10,000 of those small pewter Brett Favre statues. It was probably the dad of the guy who thought it was a good idea to make one of those Jay Cutler plaques. Those guys.

WINCRAFT SPORTS DEION SANDERS DALLAS COWBOYS PENNANT – $4.05
There’s not much to be said for this pennant except that Deion Sanders has a smile that really lights up the room, and based on the prices of things listed above, this one is an f-ing steal.

SPORTS CARD LOT 50 CARDS SELLING OFF MY CHILDHOOD COLLECTION READ DESCRIPTION — $2.95
There’s something about this all-caps eBay listing title that really bums me out. I think it’s the combination of the uncomfortable and weird word choice and sequencing (“SPORTS CARD LOT 50 CARDS”), the overt selling of one’s childhood possessions/the sadness involved in getting old (“SELLING OFF MY CHILDHOOD”), and then the plea of desperation to get anyone to listen (“READ DESCRIPTION”), along with the price ($2.95) that creates this perfect storm of depression. That being said, it’s probably more depressing to be the person who is breaking down the word choice of a guy trying to sell some sports cards on an online bidding site, but, potato potato.

For more of our favorite eBay finds, click here.