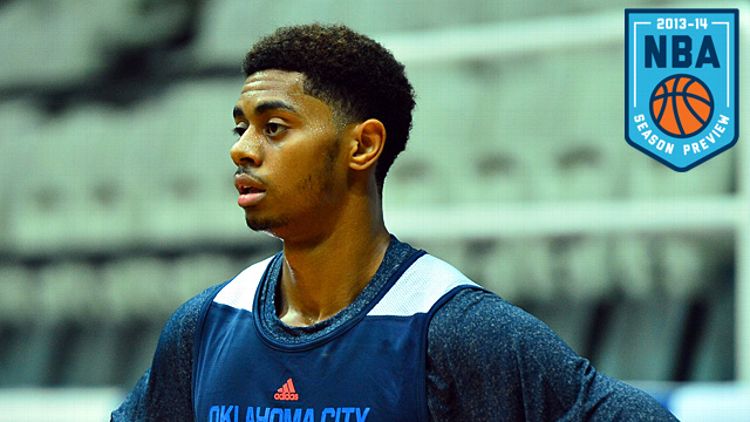 The tips of his hair are stained a light brown. Under certain lighting conditions, the top of his head glows like charcoal embers. It used to glow from the roots up, but the passage of time has left his hair in a faded, umber state. It all happened so quickly. On June 22, Lamb recorded his first Instagram video, on his couch, in a tank top (presumed to be Trukfit, Lil Wayne’s unfortunate clothing line). On June 23, he posted an Instagram photo, on the same couch, wearing a different tank top (confirmed to be Trukfit), with hair that lit up like a jack-o’-lantern.

The look was reminiscent of a particular follicular mystery from last year’s preseason, when Hasheem Thabeet had an orange patch of hair on the back of his head. At first glance, it looked like a dollop of peanut butter a teammate left in his hair to prank the Oklahoma City newcomer. It would later be revealed to be a tribal mark that he has kept as good luck ever since. Coming into this season, rookie Dennis Schroeder and Amar’e Stoudemire both appear to have similar markings in their hair. However, considering the thoroughness of Lamb’s dye job, it doesn’t appear to be influenced by his friend and fellow UConn alum.

Two weeks later, Lamb’s dyed hair made its TV debut in his first game at the NBA Orlando Summer League. He shot 5-for-16 from the field. He was a trending topic on Twitter. Some went in about his shot selection. Most were worried about his hair.

That night, Lamb took to Instagram to express his bewilderment:

“You know what’s crazy? My hair trending? Like, really, on Twitter, like, is it that much? Do it really look that bad, though? People calling me Chris Brown and all that!”

A young man of certain convictions, he chose to keep the hair. Perhaps it was time for a change, time to signal a fresh start and a new season. Changing his hair color was a choice, something he could control.

Something Lamb could not control was the way he suddenly became a vital component of a team with legitimate championship aspirations, after logging 147 inconsequential minutes (41 of which came in OKC’s final regular-season game) as a professional basketball player.

Days before the news broke that Russell Westbrook would miss the first month of the 2013-14 season because of a setback on his recovery from offseason knee surgery, Lamb downplayed the urgency of the Thunder’s need for him to develop into an above-average starting shooting guard. Scott Brooks expressed optimism in Lamb’s future, selling reporters on the positives Lamb could bring to the team during the next six to seven years.

No one’s waiting six or seven years. Neither Lamb nor the Thunder can afford it anymore. Everything — the time it should take for him to get used to playing significant minutes, the time before he will be declared a bust in the shadow of James Harden — is accelerated. The Thunder need him now. And if you can’t see it in Lamb’s bulging, vacant eyes, then you’ll see it in his play. His preseason has been disappointing at best, disastrous at worst. He’s 21. He’s thinking too much. He’s asking reporters how poorly he shot. He’s trying to do too little, and when he does what he’s supposed to, he’s rewarded with clangs of the rim and hushed whistles. But he’s trying. The Thunder are holding their breath, hoping this preseason performance is just the bad separating from the good. And there is a lot of good, even if Thunder fans are already bracing for a catastrophe.

Jeremy Lamb and his NBA star potential entered my life three months after he hit the radar for most basketball fans. Most were smitten by his play in the 2011 Big East tournament and then during UConn’s run to the NCAA championship. Aside from that UConn-Butler game being the worst NCAA championship final any of us will ever see, what most will remember is Lamb’s ascendance. I’ve never been able to shake the image of his NCAA championship postgame interview on CBS with Kemba Walker, where Lamb sat motionless and stared at the camera, barely awake, barely alive. He might’ve muttered a few words, though it wouldn’t shock me if it was the sound of air passing through his hollow shell. It’s cruel to judge an 18-year-old on his onscreen charisma, but it didn’t seem like a matter of shyness. It was a matter of his mind not appearing to be linked to his body.

The day Lamb convinced me of his chance to become a game-changing reckoner of the future was the morning after Independence Day. Lamb was the headliner of Team USA as it traveled to Riga, Latvia, for the 2011 FIBA U19 Tournament. He dropped 35 on Lithuania in a game that also featured a 30-point, 15-rebound performance by Jonas Valanciunas. Lamb’s absurd length was fully on display in that tournament. You don’t quite appreciate a player’s freakish qualities until he uses his gifts to make a ho-hum play that would be completely impossible for the average human being — or average athlete, for that matter. Not three minutes into the Lithuania game, Lamb surged into a wide passing lane to steal the ball at center court. It took him just a couple of strides to reach the rim, and then he began to gather for a two-legged dunk, but something went wrong. He lost control of the basketball, which dropped slightly below his knees and forced him to improvise to save the play. Lamb reached down for the ball with all of his 6-foot-11 wingspan and whipped it over his head for an easy layup (for him). There was nothing inherently beautiful about the play other than Lamb’s ability to make it happen.

Then there was the final basket of the game. With the game tied at 105, Team USA got the ball to Lamb at midcourt. He dribbled to the right block and stopped with his back to the basket. Three defenders surrounded him, forming an isosceles triangle with Lamb in its center. If he spun to the baseline, two defenders would be waiting to trap. If he turned the other way, there could be a sliver of space.

Lamb turns left and fades with three seconds remaining. Somehow, all three defenders are frozen and Lamb gets an uncontested shot — the kind of fadeaway that every basketball-loving kid has tried to emulate in his or her driveway since Jordan’s heyday, the same shot that makes legends of the lucky and tempts would-be stars into careers of inefficiency. Isolate Lamb’s movements and it’s basically a drill run. Superimpose practice footage over the game footage and run them simultaneously, and they might look identical. It was a rote maneuver. Nothing beautiful about it, other than Lamb’s ability to make it happen.

Lamb dominated a game that included five future NBA first-round draft picks. Maybe it seems like I’m digging a bit far into the archive. I might be. Before Lamb’s shooting woes and before Harden’s beard starting creeping into his nightmares, there was a genuine buzz about Lamb. There was a reason to be excited, and there still is. But Lamb is caught in a no-win situation. Comparing him with Harden, the NBA’s best new-age swingman, is unfair, and doing so could cause irreparable damage to Lamb’s psyche — as a basketball player. On the other hand, the Thunder have nobody better than Lamb to insert into Kevin Martin’s role and hope that he can be an above-average replacement. In interviews, Lamb has begun to embrace the idea of being a jack-of-all-trades role player, and it’s evident in his play. He’s committing to defense, which is more than half the battle when you possess his foot speed and wingspan. He has made some astonishing passes in the preseason, which may or may not surprise you, depending on how closely you followed his progress with the Tulsa 66ers. These are elements the Thunder didn’t get from Martin last year. The idea of replicating Martin’s role with Lamb is safe and comforting for his young career, but part of me hopes that Oklahoma City still finds possessions that allow Lamb to find his own way — to develop into whatever kind of player Jeremy Lamb would naturally become, without the Harden trade and its fallout hanging over his head. It has been more than two years since his promising 2011, but I’m not so sure that version of Jeremy Lamb has left us yet.

Squint at Lamb’s 6-5 frame in action for a while and you might see something startling: a player who can confidently curl off screens to free himself for a shot, but someone who has dreams of operating out of the pick-and-roll; a player who knows he has skills off the dribble, but who conceals it for now because he lacks polish; a player with a monk’s disposition who might soon latch on to the team’s culture of explosive anger. There’s at least a little bit of Kevin Durant in Lamb, minus four or five inches in height and wingspan. No one knows how good Lamb can be, and no one knows how much of an impact he’ll have on this season, but his teammates are optimistic about his prospects. If the Thunder want to return to the Finals, they’ll need Westbrook, but they’ll also need a fourth element in their offense. I’m still holding stock in Lamb’s ability to make it happen.