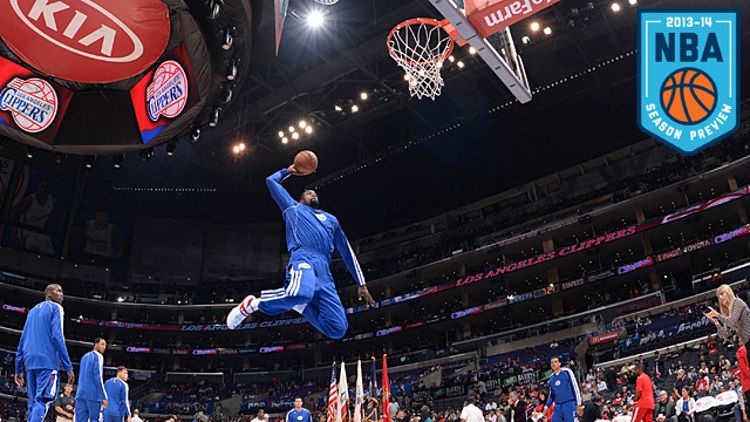 You know how sometimes you go to a bar and once you get your bearings, you see that there is clearly someone there who has their charm dial tuned to the exact right frequency of the universe, and you’re just like, “Man, who brought Ferris Bueller?” That was DeAndre Jordan before Los Angeles Clippers home games during the regular season last year.

I went to a fair number of those games, and every one of them followed the same arc. There was Jordan, a tower of charm in a red-and-blue tracksuit, doling out knowing handshakes to players on the opposing team, cracking up while going through his stretches, rapping along to Trinidad James (“WOO!”), and taking the breath away of the admittedly sparse pregame Staples crowd (see SNL‘s “The Californians” sketch) during the Clippers’ dunk line.


The good times would go on into the night. Nobody brought a bored, phone-checking crowd at a pre-Christmas game against the Wizards to life like DeAndre Jordan. Things could be inching along without much fanfare and then, boom, a huge blocked shot, or better yet, an opponent-dissolving dunk. He was like the basketball Kool-Aid Man, bursting through the wall, shouting “OH YEAH!!!” into your soul.

As the game got late, things got weird. As the party wound down, someone would take Jordan’s keys away from him. You would realize, late in the third quarter, that you hadn’t seen him in a while. When crunch-time rolled around, you’d forget he was on the team altogether. Jordan played in 82 regular-season games last year; he only appeared in the fourth quarter in 30 of those.

As the games would get more important, Jordan’s absence from them would become more pronounced. The public schism between Jordan and his coach, Vinny Del Negro, was like a rite of spring. Jordan would see his playing time dwindle, he would mope on the bench with a towel draped over his head, he’d make cryptic comments after games, and he’d draw public criticism from his coach.

After winning the first two games of their first-round playoff series with the Grizzlies last season, the Clippers lost four straight. In an embarrassing, 21-point Game 4 defeat, Jordan only played 17 minutes and took three shots. Del Negro said after the game: “I don’t know if crossroads is the right (word) but there’s definitely a level you have to play at right now that is much different … He has a much different responsibility now. He understands it. I haven’t seen the consistency that I like. He hasn’t seen the consistency he would like.”

You only had to watch Jordan to see why Del Negro was finishing games with a different player at center than the one who started them. You could see Jordan’s focus wane; you could watch him blow defensive rotations; and you knew that on offense he was a liability. Sure, the dunks were like a T-shirt cannon that sprayed adrenaline into the crowd early on. But his criminally low free throw percentage of .386 made hack-a-DeAndre a viable defensive strategy for opposing teams. When that percentage dropped to .222 in the playoffs, Del Negro knew that playing Jordan meant gambling with his job.

Turns out Del Negro lost his job anyway. It also turns out that Jordan was only just arriving at the crossroads.

You may have heard the news that Lob City is dead. One part marketing ploy, one part offensive philosophy, Lob City actually caught on, both in and out of Los Angeles, in a way that most team slogans/brands fail to. I mean, Fear the Deer was cool, but it wasn’t exactly a household saying.

Lob City perfectly captured the Clippers. Just saying “lob” feels fun and breezy. It represented a group of guys who — despite counting hard cases like Matt Barnes and psycho-competitors like Chris Paul among them — obviously enjoyed their work. The alley-oop was more than just highlight-reel material for the Clippers; it was a way of being. They had the song, they had the logo, and with the deaths of Kendrick Perkins and Brandon Knight, they had two defining moments.

And no Clipper symbolized the long-hair-don’t-care vibe of Lob City as much as Jordan. Blake Griffin and Chris Paul may have had the endorsement deals, but Jordan became a folk hero. If Lob City were an actual place, Jordan was its beloved mayor.

The departure of Del Negro and arrival of Doc Rivers certainly signified some institutional tie-straightening. When Griffin put an end to the era in print, you had to wonder what it meant for Jordan. That Rivers’s arrival also coincided with rumors that Jordan was going to be part of the Celtics’ compensation package, and that he could be replaced on the Clippers’ front line by Kevin Garnett — possibly the least fun-loving player in the league — only amplified that idea that fun time in Los Angeles was over.

Turns out, according to Rivers, the idea was never to cast Jordan overboard — it was to give him a higher rank altogether. Shortly after he was hired (and once Garnett was safely stowed in Brooklyn), Rivers said: “I was seeing the trade talks and I was saying, ‘Wait a minute! We don’t want to give away that guy!’ We wanted that other guy too. That was the home run to get both … [Jordan] is just too young and too gifted to let walk out your door, bottom line. He’s a game changer defensively. He can single-handedly change a game with his defense. There’s five guys, and that number maybe too high, that can do that single-handedly with their size and athleticism and he’s one of them. When you have one of those guys, you want to keep them.”

Other pieces in the X-Files series have discussed players who, wittingly or not, could make the difference in their team’s season. But none of them have had this responsibility so publicly foisted upon them like Jordan. And none have embraced that responsibility the way he has.

Jordan is probably an overachiever based on his draft position (he was selected 35th in 2008) and underachiever in relation to his contract (Los Angeles gave him a four-year, $43 million deal, matching an offer sheet from Golden State) and career stat line (he has never averaged more than eight points a game). On any given night you can catch glimpses of both his limitless potential and his glaring flaws. He is a project, and now Rivers and the Clippers expect this project to be finished.

Doc Rivers inherited a team with arguably the best point guard in the league and an exciting, All-Star power forward in Griffin, who’s capable of averaging a double-double. To that mix he has added capable role players like J.J. Redick, Jared Dudley, and Darren Collison. But according to everything that’s coming out of Clippers camp, this team will go as far as DeAndre Jordan can take them. If we’re not talking about Jordan’s defensive impact on the Clippers in the same way we talked about Roy Hibbert’s on the Pacers, he will have fallen short of Rivers’s expectations.

For his part, Jordan is saying all the right things. “It’s about maturity,” he told ESPN earlier this summer. “I have to set an example for my teammates, so do Chris and Blake. But my thing is mainly defense. That’s my only focus this year. I’m not really focused on anything. Defense is my first, second and third priority.”

He’s also doing the right things on the court. Caveats about preseason being preseason aside, Jordan has been putting up mouth-watering numbers, including a 14-point, seven-board, six-block night against Utah (in only 21 minutes played).

So, death to DeAndre Jordan, moody jester of Lob City, long live DeAndre Jordan, Kevin Garnett of the Celtics West. There’s part of me that’s going to miss the former, but the transformation to the latter is probably necessary, especially if Jordan still wants to be on the floor at closing time.