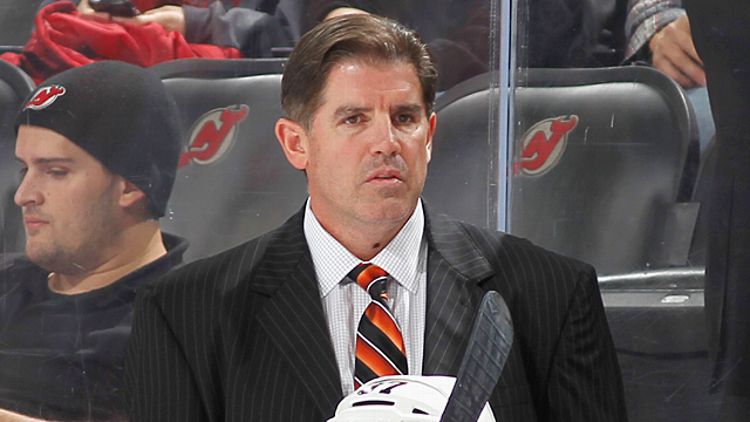 Well, that didn’t take long. Less than one full week into the season, we have our first coaching casualty: Flyers boss Peter Laviolette, who was canned after an 0-3 start and replaced by Craig Berube.

While the move may have come stunningly early, it’s not exactly a shock. The Flyers have looked awful so far. And despite this overflowing file folder by my computer labeled “pre-written Flyers goalie jokes,” goaltending has been the least of their problems. The much-maligned Steve Mason has been fine in his two starts, including a 32-save performance in Sunday’s 2-1 loss to the Hurricanes.

But the defense looks old and slow, spending long stretches pinned in its own zone in all three games. And even when the Flyers do get the puck into the other end of the ice, they don’t look dangerous. They’ve managed three goals on the year, just one of those at even strength, and top players like Claude Giroux, Scott Hartnell, and Jakub Voracek have all been held off the scoreboard.

None of that can be considered acceptable for a heavy-spending team that’s only managed to stay cap compliant thanks to long-term injured reserve exemptions, and that spent heavily on buyouts and acquisitions in the summer. In fairness, offseason additions Vincent Lecavalier and Mark Streit have looked good — with a combined four points, they’ve accounted for half of the roster’s total offense — but the team just isn’t clicking right now. This is where we’d normally add the “small sample size” disclaimer, but even that loses some impact when you recall the Flyers floundering through a 1-5-1 preseason.

Laviolette had long been rumored to be on the hot seat. Now that he’s gone, it may not be long before GM Paul Holmgren has a target on his back, too. The Flyers should be able to record their first win Tuesday night when they host the Panthers. If not, expect things to get ugly in Philadelphia.

With a new coach and another year of maturity for the team’s impressive core of young forwards, this was supposed to be the first year that the Oilers finally, mercifully made a push for a playoff berth since 2006. Instead, they’ve opened the season with a pair of defeats, including a third-period collapse in their opener against the Jets and a blowout loss on Saturday to the Canucks.

Through two games, the numbers are ugly:

• At 0-2-0, the Oilers are the only point-less team in the Pacific Division

• They’ve given up 11 goals in those two games, with goalie Devan Dubnyk sporting an ugly 6.52 goals-against average to go with an .831 save percentage

• With Ryan Nugent-Hopkins and Sam Gagner out with injuries, the team’s other three top young forwards (Taylor Hall, Jordan Eberle, and Nail Yakupov) have combined for zero goals, two assists, and a minus-10 rating

• Hall has been especially bad with just one point, a minus-5 rating, and some notable mistakes as he attempts to transition from left wing to center

• The team has looked generally sloppy for much of the first two games, committing several turnovers that led directly to goals against

So is it time to panic in Edmonton? Throw in the towel on another lost season? Start planning the draft lottery–viewing parties? Given that there’s still 80 games left to play, the answers to those questions are fairly obvious. But just because you’re not panicking doesn’t mean you can’t be concerned, and so far most Oiler fans are.

Let’s start with Dubnyk, who’s yet to fully win over the Edmonton faithful. Even though the front office has never quite seemed convinced that he’s their guy — the Oilers were featured prominently in early offseason rumors involving Cory Schneider and Jonathan Bernier — he entered the season as the clear no. 1. He has struggled early, with several of his goals against coming from long range, and that has to have an impact on the confidence level of such a young team.

But while nobody would try to sell Dubnyk as an elite goalie, his career numbers are better than you probably think they are. This still looks like more of a mini–cold streak than a genuine long-term concern.

As for the young forwards, there’s some good news on the horizon. Nugent-Hopkins is expected back tonight. Hall appears to at least temporarily be headed back to the wing. And while the younger guys have been disappointing, it’s worth noting that 30-year-old Ales Hemsky has been able to climb out of his rocking chair long enough to be the team’s best player.

The Oilers host the Devils and Canadiens this week, which presents a decent opportunity to at least get close to .500 with two solid efforts. If not, some justified panic could start setting in — they head out on the weekend for a six-game road trip, with each of those games against a 2013 playoff team.

The Oilers may have been the trendy choice as this year’s emerging young team, but there was another Western squad featuring a rookie head coach and a roster packed with high draft picks. That would be the Colorado Avalanche, and through two games they’ve looked like the breakout that Edmonton was supposed to be.

Again, it’s been two games, so all the usual caveats apply. But it’s hard not to be impressed with a pair of wins and a plus-7 goal differential that ranks second in the league. True, it’s come against a rebuilding Predators team and the Anaheim Ducks, who had everyone who read a season preview Googling “regression.” But you can only play who the schedule-maker gives you, and the Avalanche have looked good doing it.

We all had our fun with Patrick Roy’s reputation as a hothead (and he certainly hasn’t disappointed in that area), but we probably should have spent more time talking about his coaching chops. He’d had eight consecutive winning seasons coaching the QMJHL’s Quebec Remparts, but the conventional wisdom was that an act that worked against teenagers wouldn’t translate to the professional ranks. That could still end up being the case, but so far Roy sure seems like he knows what he’s doing.

Meanwhile, all the hype around Roy overshadowed another Avs coaching hire that may end up being almost as important: goaltending coach Francois Allaire. Yes, the same Allaire who was all but labeled a dinosaur by Brian Burke last year is back in the NHL after being hired by Roy, his most famous former student. It’s his job to develop Semyon Varlamov into the star that Colorado thought it was getting when it dealt a first- and second-round pick for him in 2011.

Two games in, Varlamov has allowed two just goals and owns a tidy .968 save percentage. He bailed the Avalanche out several times Friday, keeping them in the game long enough to earn a win in the first NHL battle between Nathan MacKinnon and Seth Jones.

(That game also featured a controversial hit by Steve Downie that concussed Preds defenseman Roman Josi. While Downie has a well-deserved reputation for dirty hits, this wasn’t one. Devastating, yes, but not dirty, as Brendan Shanahan agreed after a review.)

The good times may not last. The Avs head out on the road this week, and their first two stops in Toronto and Boston will see them facing teams that own a combined record of 5-0-0. But for one week at least, the Avs are the league’s feel-good turnaround story. Sorry, Edmonton fans.

• Teemu Selanne’s last game in Winnipeg was a great moment, and probably produced the loudest crowd reaction of the young season. So loud, in fact, that it apparently damaged Zach Bogosian’s vestibular system and resulted in him doing this.

• The Maple Leafs are the league’s only 3-0 team, a fact you’re already well aware of if there are any Maple Leaf fans within a 30-mile radius of where you live.

• The Blues look scary. Their 7-0 spanking of the Panthers was such a monumental mismatch that it felt like watching … well, the St. Louis Blues play the Florida Panthers. Sorry, I couldn’t actually think of a more fitting metaphor.

• Also scary: the Sharks, who barely seemed to break a sweat in posting identical 4-1 home wins over the Canucks and Coyotes.

• The Sabres join the Flyers as the only two current members of the 0-3 club. Given the state of their roster, that establishes the Sabres as the favorites to finish dead last and then lose the draft lottery to whichever better market Gary Bettman decides to rig it for.

• Every team in the league has now played two or three games, with one exception: the Rangers, who lost on Thursday and haven’t played since. Or, as sports fans in New York call them, “the most successful franchise we have right now.”