The Weekend in Hockey: Terrible New Jersey Still Hanging On, Thanks to Terrible Division 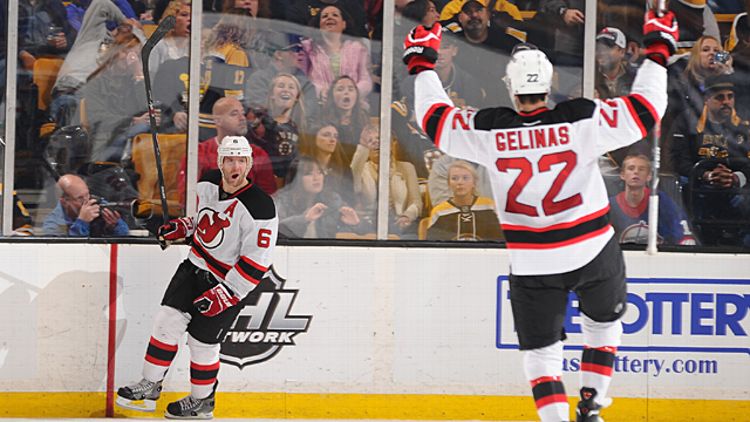 Giving the Devils Their Due

The Devils entered the weekend with little reason for optimism. Ten games into the season, they had only one win and had averaged just two goals per game. And with Cory Schneider hurt and Martin Brodeur struggling badly, a team that had been able to fall back on excellent goaltending for almost two decades was suddenly faced with a glaring weakness in the crease.

To make matters worse, New Jersey couldn’t even throw in the towel and go into tank mode for a high first-round pick in the 2014 draft, because it won’t have one — the Devils lost that choice as part of their punishment for the 2010 Ilya Kovalchuk contract fiasco. The league’s decision mandated that New Jersey could forfeit any first-round pick from the last four years and, for reasons that nobody seems to fully understand, chose not to do so when they owned the 29th-overall pick in 2012. After watching the Devils struggle through the season’s first few weeks, it was hard not to wonder if that decision could wind up costing them the first-overall pick in next year’s draft.

Well, not so fast. For one night, at least, the Devils had something to celebrate, going into Boston and beating the Bruins with an impressive third-period comeback. Trailing 3-2 with just over a minute to play, the Devils stunned the Bruins with a pair of quick goals. Both came on the power play, courtesy of a Torey Krug high stick and our old friend the worst rule in hockey. That snapped a five-game Bruins win streak and bumped Boston back down to a tie for third in the Atlantic.

And as far as those hopeless Devils … don’t look now, but thanks to the general ineptitude of the Metropolitan Division, they’re still very much in the playoff hunt. While they’ve won only two games on the year, their four losses in overtime and shootouts leads the league, and those four loser points give them a total of eight. That’s still pretty bad, but it’s enough to move them ahead of the Flyers and Rangers and to within just three points of a playoff spot.

The preseason consensus was that the Central would feature a year-long duel for first place between the Blackhawks and Blues, with the division’s five remaining also-rans scrambling for the final playoff-spot crumbs. The Colorado Avalanche have already thrown a wrench into that scenario, and now the Minnesota Wild seem intent on joining them.

The Wild finished off a 3-and-0 week by going into Chicago and earning a 5-3 win over the defending champs. That followed home wins over the Predators and Hurricanes, and it left Minnesota at 6-3-3 on the year. That’s good enough to move them into a tie with the Hawks for second in the division while nudging St. Louis down to fourth (though the Blues hold three games in hand).

On Saturday night, it was a pair of Jason Pominville goals that turned a tight 2-1 game into a 4-1 Wild lead by midway through the third. That was enough for goalie Niklas Backstrom, who was forced into action after a Josh Harding injury despite not being 100 percent healthy himself. Backstrom made 33 saves and earned the game’s first star.

It was the second straight loss for the Blackhawks, and they’ve given up 11 goals in those two games. Small sample size aside, that’s a surprising stretch for a team that allowed the fewest goals in the league last year and spent heavily in the offseason to extend starter Corey Crawford and bring in backup Nikolai Khabibulin. The latter has looked especially shaky in limited action, recording an ugly .818 save percentage in his two starts.

The Wild and Blackhawks get a rematch tonight, this time in Minnesota.

My Pun-Based Headlines Have Jumped the Shark

As the weekend drew to a close, the Sharks remained the league’s best team. San Jose sits at the top of the standings with a 10-1-1 record through 12 games, and their plus-28 goals differential leads the league by a mile (the Avalanche are second at plus-19). If there’s such a thing as a prohibitive Stanley Cup favorite in October, right now the Sharks are it.

On Saturday, they smothered the Canadiens en route to a 2-0 win. Antti Niemi didn’t need to make many highlight-reel saves on his way to a 22-save shutout, but he was solid when called upon. Logan Couture accounted for both Sharks goals, with each coming into wide-open nets. The first of those came courtesy of a beautiful cross-ice pass from Joe Thornton on a second-period Sharks power play, and the second was thanks to a flukey third-period deflection off the glass behind Carey Price that bounced right to Couture in the Montreal crease. That was a tough break for the Canadiens and especially Price, who was excellent in a losing cause.

The Sharks continued their tour of eastern Canada Sunday night with a visit to Ottawa. They were outshot 40-29, a rare result for a team that usually dominates possession, but it didn’t matter — backup goalie Alex Stalock made 38 saves in a 5-2 San Jose win. Those five goals were a nice finish to a week in which the Sharks managed only three goals in their three other games combined.

The Sharks will play three of their next four against Pacific Division opponents, including a tough road game in Los Angeles on Wednesday. That could present an opportunity for the rest of the pack to start making up some ground. Of course, it could also be a chance for the Sharks to pull even further ahead, and continue their march to the conference’s top seed.

• The biggest headline of the weekend came off the ice, as the Sabres finally traded sniper Thomas Vanek. The decision to deal their best forward wasn’t a surprise — everyone expected Vanek would be moved at some point during the season — but the destination was somewhat unexpected. He’s headed to the New York Islanders in exchange for Matt Moulson, a first and a second.

That’s a decent return, and with Moulson in the last year of his contract you can assume the Sabres will eventually flip him, too. Buffalo had the luxury of waiting till the deadline if they couldn’t find an offer they liked before then, but this was a deal worth taking.

The bigger story here is the Islanders, who are clearly pushing some chips into the middle of the table on this one. Vanek is a pending free agent and the Islanders don’t have an extension in place, so this move could backfire badly if he walks in July (it’s been widely assumed that he’ll end up in Minnesota). But the Isles may figure that a few months of playing on a line with John Tavares could make him eager to stick around.

• The Maple Leafs moved back into a share of first place in the East, playing what may have been their best game of the year in a 4-1 win over the Penguins despite missing forwards Tyler Bozak, Joffrey Lupul, and Nikolai Kulemin to injury. As usual, the Leafs were badly outshot but earned the win thanks to timely shooting and strong goaltending, this time from James Reimer.

• Joining the Leafs at the 16-point mark are the surprising Lightning, who rallied to beat the Sabres on a pair of late third-period goals on Saturday before edging the Panthers in a shootout on Sunday.

• That loss in Tampa Bay snapped the Sabres’ season-high one-game win streak, as they’d recorded their first regulation win of the year on Friday with a 3-1 decision over the Panthers. Buffalo’s next two games are against fellow last-place teams as they host the Stars tonight before heading to New York on Thursday to play the Rangers.

• While Alexander Ovechkin’s hot start is starting to inspire some 50-in-50 talk, the Capitals are still struggling to crack the .500 mark. After a three-game winning streak moved them to 5-5-0 on the year, they suffered a disappointing 5-2 loss to the Flames in Calgary on Saturday that saw starter Braden Holtby pulled midway through the first.

• Last week, we highlighted Predators rookie backup Carter Hutton, who’d earned his first career win at the age of 27. Hutton’s profile has now been raised considerably thanks to a serious hip infection suffered by starter Pekka Rinne. That means Hutton will be the starter for at least the next few weeks, and the Predators hope he’ll play better than he did in Saturday’s 6-1 loss to the Blues.

• The Canucks got back on track this week, recording road wins against the Islanders, Devils, and Blues to move to 8-4-1. They’ve managed to stay within striking distance of the Sharks and will spend this week hosting a trio of Eastern Conference teams (Washington, Detroit, and Toronto).

• The Kings beat the Oilers in a shootout, moving to 8-4-0 on the year. That would be good enough for first in the Metro, but leaves them just fifth in the Pacific.

• Western Conference teams continued their dominance over the weekend, winning all six interconference games. They’ve now won 50 of the 77 matchups between the conferences this season.