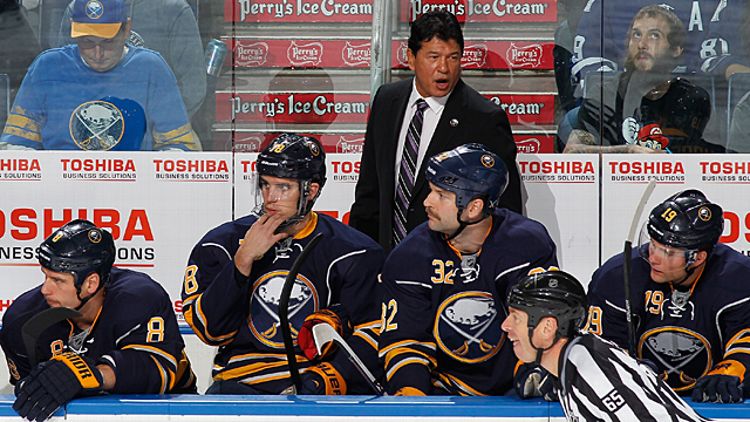 All season long, the hockey world has been expecting the Sabres to clean house and start looking toward the future. It turns out we were half-right — Buffalo made changes Thursday, but with an eye fixed firmly on the past.

The Sabres’ decision to part ways with longtime GM Darcy Regier was shocking only in the sense that they chose not to do it during the offseason. Firing coach Ron Rolston was a mild surprise since he’d only been on the job for 51 games dating back to last season, though he’d also managed to win just 19 of those.

But their replacements raised eyebrows, as the Sabres brought back former star Pat LaFontaine as president of hockey ops (he’ll eventually hire a new GM), and former coach of the year Ted Nolan as interim coach. While both men are undoubtedly popular in Buffalo, LaFontaine has no front office experience and Nolan hasn’t coached in the NHL since 2008.

Can it work? The obvious answer is that it can’t get much worse. LaFontaine might be inexperienced, but he’s well-respected for his hockey smarts and did a good job articulating a long-term vision during the introductory press conference.

Nolan, meanwhile, is one of the league’s great mysteries — the Sabres parted ways with him immediately after his Jack Adams season, and it took him 10 years to get another NHL job (he lasted two seasons with the Islanders before being fired in 2008). He’s an intense guy and will no doubt bring his style of ever-so-subtle player motivation to the Buffalo locker room.

The Sabres split a pair of weekend games with the Maple Leafs, winning 3-1 at home Friday before dropping the rematch 4-2 in Toronto. The Sabres had already beaten the Sharks and Kings this month and actually climbed out of last place overall with Friday’s win, before dropping back down after the Oilers earned two points the next day.

Avalanche Falling Faster Than a … Man, What’s the word I’m Looking for Here?

Remember when the Avalanche were competing for the top overall spot? It seems like only last week we were talking about their miraculous season while praising the genius of their rebuild strategy.

Things can change quickly in the ultra-competitive West, and a three-game losing streak has dropped the Avalanche all the way down to eighth place in the conference. That’s despite the team still having 28 points, which would be good for a share of first in the East.

So what’s gone wrong? Well, the most obvious culprit is goaltending. It had been its strength all year long, as the team racked up a league-leading save percentage. But it was hard to shake the feeling that regression to the mean was lurking just around the corner, and this was the week it apparently decided to make its presence known. Semyon Varlamov didn’t make it to the 13-minute mark in a 7-3 loss to the Blues on Thursday, and he was only slightly better in a 4-1 loss to the lowly Panthers on Saturday.

The offense has dried up, too, with just five goals during the three-game skid (and that includes two late goals in the St. Louis game after the result had long been decided). And now Matt Duchene is hurt, suffering an oblique injury that could keep him out for a week or more. It’s fair to say the Avs are facing their first adversity of the Patrick Roy era, and the fans are taking all of this about as well as you could expect.

The schedule won’t help much, as their next four opponents are the Blackhawks, Coyotes, Kings, and Blues — four teams currently holding down Western Conference playoff spots. If they can’t turn things around quickly, we won’t be able to say the same for the Avalanche much longer.

There’s a strange sight in the “streak” column of the NHL standings right now: Mixed in among the various win streaks and losing streaks is an “OT 5” next to the Red Wings.

Yes, Detroit has managed to lose five straight games in overtime or a shootout, including decisions to the Capitals and Islanders over the weekend. They’re the first team in 10 years to play five straight overtime games, and their seven overtime/shootout losses lead the league.

Those five straight loser points have helped ease the pain of what’s now a six-game losing streak for a team that hasn’t won at home in more than a month. On the season, the Red Wings have just nine wins in 21 games. But they’re well over the .500 mark with 25 points, because this is the NHL, where the standings don’t make sense and nobody seems to care.

Detroit plays in the East, which means those 25 points are more than enough to keep the Wings comfortably in a playoff spot. But it has still been a troubling run for a franchise that’s not used to extended losing streaks. And what’s worse, it’s not like there’s one or two glaring problems that the team can concentrate on. As disappointing seasons go, this one has been a true team effort.

Let’s start with the offense. While Pavel Datsyuk and Henrik Zetterberg have been excellent as always and Daniel Alfredsson has had moments, it’s been a top-heavy bunch, with no other forwards managing more than 10 points. Johan Franzen is healthy again, but Alfredsson was scratched Saturday with a groin injury and the disappointing Stephen Weiss has missed four straight.

Meanwhile, goaltender Jimmy Howard has been just OK, posting a .910 save percentage that puts him well back from the league leaders, and the team’s young defensemen have struggled to create offensive pressure.

The good news is that the upcoming schedule offers some hope, with the next four games coming against the Predators, Hurricanes, Senators, and Sabres. None of those teams has managed to pass the 20-point mark, so the Red Wings should be able to bank some points. The question will be whether they can finally start earning them two at a time.

• With the Avs plummeting, it may be time to hand their crown as the West’s Cinderella team to the Coyotes. Phoenix beat the Lightning on Saturday to move to 14-4-3, leaving it at 31 points, just one back of the Ducks for first place in the Pacific.

• Full credit to Tampa Bay — despite a devastating injury to Steven Stamkos, the Lightning earned wins over the Canadiens and Ducks before dropping Saturday’s matchup. They’ve now opened up a three-point lead on top of the Eastern Conference and will head to California for a three-game road trip against the Kings, Sharks, and Ducks this week.

• Another potentially devastating injury that hasn’t had much impact yet: Kings goalie Jonathan Quick, who was hurt last week. Backup Ben Scrivens has posted three straight wins in his absence, including a pair of weekend road shutouts against the Devils and Rangers. Scrivens now leads the NHL in save percentage.

• Rookie Cam Talbot earned his first career shutout Saturday, leading the Rangers to a 1-0 win over the Canadiens. It was the first shutout for a New York goalie in Montreal since Eddie Giacomin recorded one in 1967.

• Last weekend saw the Predators lose a pair of games by five goals each. They flipped the script Saturday, blowing out the Blackhawks 7-2. Rookie Marek Mazanec earned his first career win.

• We’ve spent the first quarter of the season acting derisively to NPMTs, a term for the seven Non-Penguin Metro Teams dragging down the division like an anchor. Uh, is it too late to grant honorary NPMT status to the Penguins themselves? Their loss to the Devils on Saturday was their fourth in five games, and they now sit 15th in the overall standings … and second in the Metro division they were supposed to be well on the way to wrapping up.

• The new Metro leader is the Washington Capitals, thanks to an impressive win over the Blues on Sunday night that was powered by two early goals from Alexander Ovechkin. The Caps and Pens will face each other Wednesday.

• Ovechkin is now tied for the goal-scoring lead with the Blues’ Alex Steen, who has converted a red-hot 25.4 percent shooting percentage into 17 goals on the season, just seven shy of his career high.

• Josh Harding continues to be the league’s feel-good story of the year. The Wild goalie, a year removed from being diagnosed with multiple sclerosis, stopped 21 shots in a 2-1 win over the Jets that boosted his record to 12-2-2. He has the second-best goals-against average and save percentage in the league, and has only allowed three goals once all season.

• The Leafs made a minor trade for a first-line center. That sentence shouldn’t make sense, but when you’re as thin down the middle as the Leafs are, it doesn’t take much to acquire a new top guy. On Saturday, the Leafs sent a prospect and two picks to the Ducks for Peter Holland, then immediately plugged him into the top line between Phil Kessel and James van Riemsdyk. Holland should see plenty of action with Dave Bolland and Tyler Bozak still sidelined.

As for Maple Leaf fans, it turns out they were right all along: The team really did end up getting that long-awaited no. 1 center from the Anaheim Ducks.

The Agony of the Houston Texans