The Weekend in Hockey: Don’t Sleep on the Hawks! 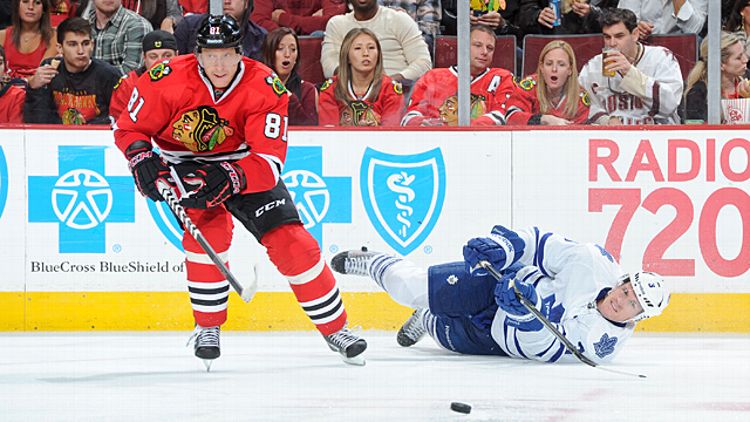 With most of the attention in the West focused on the dominating Sharks and the surprising Avalanche, it’s been easy to lose track of the Chicago Blackhawks. But it’s worth checking in with the defending champs, who now have points in five straight games and have climbed to within two points of Colorado for first place in the Central.

On Saturday night, the Hawks toyed with the Maple Leafs, outshooting them 40-20 in a game in which the 3-1 final score probably flattered Toronto. All the scoring came in the second period, with the winner coming on the first career goal from Michael Kostka, a 27-year-old defensive defenseman who spent last year with the Leafs.

That 3-1 final probably felt like a blowout to Chicago fans, as it’s the first time since the season opener against Washington that a Blackhawks contest didn’t end as a one-goal game. All those close games have left Chicago with a goal differential of just plus-4 on the season, despite a 5-1-2 record through eight games.

That fits with the general sense that this year’s Blackhawks haven’t quite clicked yet. The team’s leading scorer through eight games is the unlikely Brandon Saad, with just six points; the big-name forwards have been shifted around as coach Joel Quenneville tries to find line combinations that will provide consistent offense; and the Duncan Keith–Brent Seabrook pairing has been just OK. Goaltender Corey Crawford has looked strong, though, allowing two goals or fewer in four straight.

The good news is that the Hawks should have an opportunity to rack up significant points over the next few weeks, thanks to a schedule packed with struggling teams. They head to Florida this week for a quick two-game road trip to face the Panthers and Lightning before returning to Chicago for the first half of a home-and-home with the Wild. Over the next three weeks, the Blackhawks will play 10 games and face only one team (the Lightning) that currently holds down a playoff spot.

Meanwhile, the Leafs have lost two straight after a 6-1-0 start and remain winless since news broke of the Tyler Bozak–Miley Cyrus victory song scandal. They continue to struggle badly in possession-based metrics despite their winning record, a deficiency that may yet ultimately catch up to them the way that so many have been predicting.

Chicago isn’t the only Central Division team that might deserve more attention than it’s getting. The Predators, dismissed as bottom-feeders by ignorant season preview writers (cough), are right in the middle of the playoff hunt early on. A pair of weekend wins left them sitting at a respectable 5-3-1, and they’ve recorded nine points over their last five games.

Saturday night’s matchup in Montreal featured a goaltending duel between Pekka Rinne and Carey Price that was knotted 1-1 late in the third and seemed headed to overtime. That’s when Seth Jones worked a nifty give-and-go with David Legwand, dragged the puck around traffic, and snapped it over Price’s blocker. It was the second goal of the 19-year-old’s career and his first game winner, and his adorably excited celebration was almost as fun as the goal itself.

Jones, considered a consensus top-two pick leading up to the 2013 draft, was passed over by his hometown Avalanche with the first choice and fell all the way to the Predators at no. 4. He’s been excellent so far (with virtually every article written about him prominently featuring the word “poise”) and could even be on the radar for a spot on Team USA in Sochi.

The career firsts continued Sunday night in Winnipeg, with 27-year-old backup goalie Carter Hutton picking up his first career win in a 3-1 victory over the Jets. He was looking good for his first career shutout, too, until Evander Kane broke it up midway through the third. Still, the 38-save performance gave Hutton a .967 save percentage on the season, making him a pleasant surprise for a team that figured to have to ride Rinne hard all year long.

This week sees the Predators facing three more Central rivals, with a trip to Minnesota on Tuesday followed by home dates with the Jets on Thursday and the Blues on Saturday.

The Oilers snapped a five-game losing streak with a win in Ottawa on Saturday, during which they became the first team to be mathematically eliminated from the playoffs.

OK, that may be a slight overreaction to the sight of Taylor Hall leaving the game with a knee injury, but Oilers fans will be holding their breath as they wait for news of his MRI, which will happen today or tomorrow. Hall is the team’s top player and one of the league’s best left wingers. If he is out for any significant length of time, an Oilers season that’s already been one of the league’s biggest disappointments could turn downright ugly.

The injury came on what seemed like a minor collision between Hall and Senators defenseman Eric Gryba. That hasn’t stopped some in the Edmonton media from calling for a suspension, even though it’s hard to imagine the league taking action over two guys getting their legs tangled. Still, Hall’s reaction to the contact — he bent over in pain immediately, then took a slashing minor for swinging his stick at Gryba in frustration — was a bad sign, as was his apparent difficulty getting back to the bench after serving his penalty.

As for the game itself, the Senators were actually the better team for most of the afternoon, out-shooting the Oilers 36-21 and dominating possession (check out the game’s lopsided Fenwick chart). But a strong performance by the much-maligned goaltender Devan Dubnyk gave the Oilers the opportunity to win a choppy, penalty-filled game. The two teams combined to go 0-for-11 on the power play, including a full two-minute 5-on-3 for the Oilers in the third period that was set up when Jeff Petry suckered the officials with one of the most embarrassingly flagrant dives you’ll ever see.

Despite the win, Edmonton remains mired in last place in the Western Conference at 2-6-1. It closes out a six-game road trip in Montreal tomorrow, then returns home to host the Caps on Thursday. Ottawa heads to Detroit to face Daniel Alfredsson and the Red Wings on Wednesday in the first of four straight tough games. While there’s still 90 percent of the season to go, the inconsistent Senators can’t afford to lose much more ground in what’s looking to be a very tough Atlantic Division playoff race.

• The undisputed highlight of the weekend was goaltender Mike Smith’s buzzer-beater goal against the Red Wings. Smith became just the 11th goalie in NHL history to get credit for a goal, and just the sixth to actually shoot the puck into the opposing team’s net.

• The Penguins continue to roll, beating the Canucks 4-3 in a shootout on Saturday to run their record to 7-1-0. Goalie Marc-Andre Fleury, widely assumed to be the team’s weak link, has won all seven starts and sports a tidy .930 save percentage.

• The Hurricanes currently hold down second place in the Metro despite losing more than they’ve won. They moved to 4-2-3 with a road win over the Islanders, and are the only team in the division within five points of the Penguins, all of which is to say that Pittsburgh is going to clinch the division’s top seed by mid-November.

• The Devils became the last team in the league to earn a win, getting on the board with a 4-0 decision over the Rangers on Saturday. The shutout went to Cory Schneider, moving him to within 120 of teammate Martin Brodeur on the Devils’ all-time list.

• Speaking of the Pens, they host the surprising Avs tonight in a battle of two of the league’s seven-win teams. Colorado rebounded nicely from its first loss of the season, suffered Thursday in Detroit, by beating the Sabres on Saturday.

• The other seven-win teams are both in the Pacific: The Sharks, who beat the Flames 6-3 on Saturday and have now won by three goals or more six times, and the Ducks, who beat the Stars by the same score Sunday night and have won seven straight.

• Hey, remember last week when we mentioned that five-game road trip that was going to tell us a lot about whether the Flames were for real? It’s not off to a great start, with losses to the Ducks and Sharks. That dropped Calgary to 3-2-2 and all the way down to sixth in the Pacific. The swing through California continues tonight when they visit the Kings.

• And finally, a hearty congratulations in advance to the Philadelphia Flyers on their most successful week of the season so far.