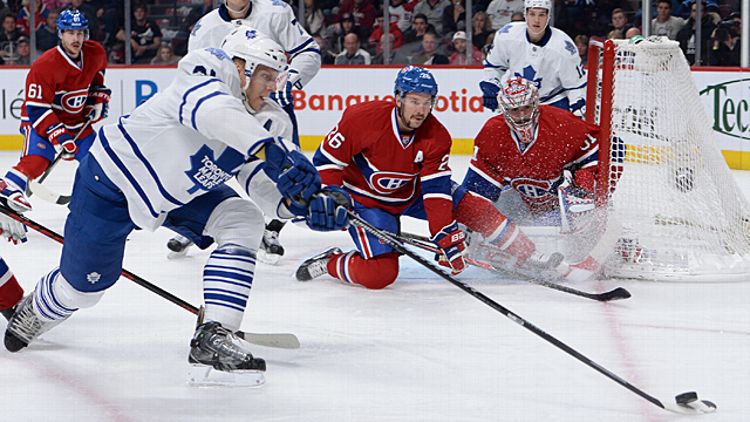 The Stats Guys Are Happy, So the Leafs Must be Losing

Early in the season, we presented the 2013-14 Toronto Maple Leafs as the canary in the advanced-stats mine shaft — the ultimate test case of everything that hockey’s wave of new metrics and data-based analytics thought it knew about what drives success. We’ve learned the numbers point to the critical importance of possession. Teams that control the puck — and use that control to direct a lot of shots at the net — usually win. Teams that can’t do it usually lose.

But occasionally we see a short-term outlier, and last year’s Toronto team was one. The stats guys said they couldn’t keep winning that way. The Maple Leafs insisted that they could. And over the season’s first few weeks, it looked like Toronto was going to pull it off once again. Leafs fans rejoiced. Old-school media gloated. Celebratory T-shirts were, literally, printed up.

Those days suddenly feel like a very long time ago. The Toronto Maple Leafs are in a free fall.

Last Monday, the Leafs were humiliated by the Blue Jackets on their home ice, dropping a 6-0 decision. On Wednesday in Pittsburgh, they suffered the embarrassment of failing to get so much as a single shot after the second intermission. On Friday, they faced the dead-last Sabres in a battle of the two worst possession teams of the advanced stats era and lost again.

Saturday night brought yet another defeat, this time to the Canadiens. Montreal jumped out to a 4-0 second-period lead before a pair of Leafs goals made the final respectable, but this one was never really in doubt.

Leafs fans won’t want to hear it, but the math is actually pretty simple: If they can’t fix their shot clock issues, the Leafs will need historically good goaltending to win. They were getting that early on, and it helped them start the season 6-1-0. But in recent games, with James Reimer and Jonathan Bernier looking merely good instead of excellent, the Leafs seem overwhelmed. In their last 20, they’ve been under .500 at 8-9-3. They can’t score anymore. The defensive system is a mess. The coach sounds like he’s out of answers. And the season is slipping away from them.

Or maybe not. This could just be a cold streak, after all, the kind that every team hits at least once or twice over a long season. It’s worth remembering that while the Leafs have dropped from the top of the Atlantic down to wild-card status, they’re still four points up on the ninth spot. Plenty of teams would love to trade places with them.

So that’s the good news. The bad news is that the December schedule is absolutely brutal, including several games with the top Western Conference teams that the Leafs have mostly avoided so far. If they’re going to turn their season around, they’ll need to do it against the league’s best.

Oh, and this is the month that the HBO cameras show up. No pressure, guys.

Ottawa Fans Are Sad, So the Senators Must Be Struggling

Daniel Alfredsson made his return to Ottawa on Sunday and was greeted with a pregame scoreboard video and a mostly warm welcome from fans. Then he went out and scored two points to help the Red Wings hand his former team yet another loss.

The Senators have been one of the season’s biggest disappointments. In 2012-13, they’d endured an almost comical string of injuries to hold on to a playoff spot, then smoked the Canadiens in a five-game rout in the first round. With the team’s roster back to full health and the loss of veterans Alfredsson and Sergei Gonchar seemingly made up for by the additions of younger pieces like Bobby Ryan and Clarke MacArthur, it felt like a given that the team would take another step toward the league’s elite.

Instead, they’ve floundered. Almost overnight, all the things the Senators were known for doing well have become weaknesses. Last year’s best penalty kill is now a bottom-10 unit, which is a disaster for a team that leads the NHL in time spent short-handed. Their best players haven’t been as good as they need to be. What was once an excellent possession team is now well under 50 percent.

And then there’s the most obvious problem of all: goaltending. The Senators had the best goals-against average in the conference last year, but this year they can’t keep the puck out of their net. They rank 26th in the NHL, even trailing behind train-wreck teams like Buffalo.

Most of that has been on starter Craig Anderson, who’s struggled badly after a fantastic year in 2012-13. His 3.51 GAA is more than double last year’s 1.69, and his .894 save percentage is almost 50 points lower. Anderson went into the year as a dark horse for the Team USA starter’s job. Now you have to wonder how long he’ll manage to be a starter, period. Backup Robin Lehner is younger, cheaper, and — right now — better. Coach Paul MacLean has tried to hold off a goaltending controversy, but at some point the Senators are going to have to start playing the best guy if they want to stay within range of the playoffs.

The good news is that they’ll have a strong chance to make up some ground this week. They’ll face the Panthers, Lightning, Leafs, and Flyers over the next eight days, and all four of those games are winnable. A six- or seven-point stretch would put them back on track to contending, just like they usually did when that Alfredsson guy was around.

John Tortorella Is Irate, So … Actually, That Doesn’t Tell Us Anything

We might as well embrace a theme for today’s post: disappointing Canadian teams. That would be your cue, Vancouver Canucks. (Or the Flames. Or the Oilers. Or the Jets. But we spun the big wheel of northern woe, and this week’s last spot goes to Vancouver.)

The Canucks took part in one of the weekend’s marquee matchups when they traveled to New York to face the Rangers. The game was the first regular-season contest between the teams since they essentially swapped coaches in the offseason. It marked Alain Vigneault’s first game against the Canucks after seven years as their coach, and John Tortorella’s return to Madison Square Garden after five years behind the Rangers bench.

That should have set the stage for a dramatic showdown. Instead, it led to a dominating effort by the home team in a 5-2 Rangers win that featured Chris Kreider’s first career hat trick. That could be considered a nice little revenge story, given how often Kreider found himself in Tortorella’s doghouse. Of course, he’s been in Vigneault’s doghouse, too, but let’s not let a little thing like the facts get in the way of our narrative.

The news was better for the Canucks on Sunday, as a pair of Ryan Kesler goals were enough to secure a 3-2 win over the Hurricanes. That boosted the Canucks’ record to 14-10-5 on the season, and to within one point of catching Phoenix for the West’s final wild-card spot (though the Coyotes have three games in hand). The two teams will face each other Friday in Vancouver, so the Canucks may be back in a playoff spot by this time next week.

Of course, just sneaking into the playoffs wasn’t supposed to be the goal for this team, which was expected to contend for the Pacific title. There’s still time to get back on track, and at least we can count on the fiery Tortorella not being shy about letting them know what they need to do. Right, Alex Edler?

• The Ducks and Sharks played a fantastic game Saturday that saw the Sharks take an early 3-1 lead, the Ducks fight back in the third to tie it, and an exciting overtime. Then it ended on a controversial shootout goal that maybe shouldn’t have counted, because the shootout is stupid. The Sharks have won five straight and moved back into first place in the Pacific.

• Brutal news for the Dallas Stars, who lost defenseman Stephane Robidas to a broken leg Saturday against the Hawks. Robidas slid into the end boards on a shot block attempt, and will miss four to six months.

• In other injury news, exiled Sabres pest Patrick Kaleta tore his ACL on Friday night and will likely miss the rest of the season. Kaleta had been waived and demoted after his latest lengthy suspension, but new Buffalo coach Ted Nolan had been hinting that a call-up was possible.

• The Flames looked like they’d lost starting goalie Karri Ramo when he went down at the end of Saturday’s morning skate after taking a shot to the knee. But he shook it off in time to start and led the Flames to a 2-1 win over Los Angeles. Former King Mike Cammalleri scored the winner in the final minute of regulation.

• Some more good news for a goaltender: Pittsburgh’s Tomas Vokoun is recovering well from preseason surgery to remove a blood clot and may be nearing a return. However, he’s still not ruling out retirement.

• The Bruins earned a pair of weekend wins over the Rangers and Blue Jackets, and have reclaimed the top spot in the East. They’re off until Thursday, when they’ll travel to Montreal to renew their rivalry with the Canadiens for the first time this season.

• The West’s top team also earned a pair of wins, as the Blackhawks topped the Stars and Coyotes. That finished off a seven-game road trip that started with a loss to the Avalanche but ended with six straight wins. Chicago hosts Dallas on Tuesday for its first home game in more than two weeks.

• The surging Flyers earned one-goal wins over the Jets and Predators, and have now won eight of their last 11. They’re just two points out of a playoff spot, and have moved to within four points of Washington for second place in the Metro.

• The Ilya Bryzgalov era has arrived in Edmonton. He earned a shutout in his first start of the season Thursday, blanking the Predators 3-0. That was followed by another start Friday, but he was pulled after allowing four goals through two periods in an eventual 4-2 loss. He failed to make it through the game again Sunday night, this time due to injury when he was plowed into by Ryan Garbutt. He’s day-to-day with an upper-body injury.

• Finally, the worst game of the weekend was Saturday’s 1-0 overtime snoozer between the Devils and Sabres. Cory Schneider needed just 15 saves for the shutout in a game that earned less-than-stellar reviews on the basis of entertainment value.