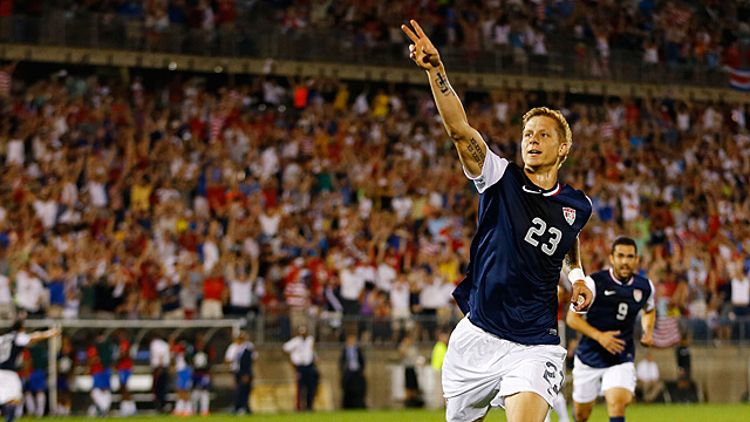 The United States men’s national team only needed a tie against Costa Rica at East Hartford’s Rentschler Field, but did one better as a late goal by second-half substitute Brek Shea gave the Americans a 1-0 victory in their third and final group stage game of the 2013 Gold Cup. The win was the squad’s eighth in a row, which broke the all-time mark set in 2007. Coincidentally, the team to set the mark was the last Stars and Stripes side to finish the group stage with a perfect record and, perhaps more importantly, the last one to prevail over Mexico and win the regional championship.

Tuesday night’s match, played in extreme heat, was a rematch of the infamous blizzard game and, in the words of head coach Jurgen Klinsmann, the true beginning of the Gold Cup. “Players understand they need to step it up and that the whole tournament really starts for us with Costa Rica,” he said Monday.

The match started slowly as the Ticos packed nine players behind the ball and dared the Americans to break them down. While Belize and Cuba, the U.S.’s previous opponents, didn’t possess the organization, the talent, or the will to stay compact, Jorge Luis Pinto’s squad was up to the task. For 82 minutes, that is. The U.S. goal came on a rapid counterattack, with Joe Corona finding a streaking Landon Donovan, who subsequently hit a perfect one-timer to a flying Shea. The Stoke City midfielder beat Patrick Pemberton, and the Americans held on for the victory.

The reward? A Sunday-afternoon matchup against Group B third-place finisher El Salvador at Baltimore’s M&T Bank Stadium. (Costa Rica plays Honduras in the other quarterfinal. If the Ticos and the U.S. win, the two teams will play in the semifinal because the goal of the Gold Cup is to keep the Americans and Mexico apart until the finals at all costs.)

For this team, this tournament is only partially about the results. It represents a chance to impress the coach on an individual level. After three games, who has and who has not?

Landon Donovan — This Gold Cup was always going to be about Donovan, who — as we’ve all been told endlessly — was returning from whatever you want to call his absence. And with three goals and three assists in three matches (plus two more goals against Guatemala), he’s clearly back in some very real capacity. Two moments stand out of me. The first was the pass to Shea.

While no one would have faulted the Los Angeles Galaxy attacker for taking a few touches and pushing toward the net on his own, he had the vision and the skill to release his teammate. It was his 52nd national team assist, well more than double Cobi Jones’s second-best all-time total.

The second moment came against Cuba, when Donovan raced back 60 yards to break up a counter. The desire that was lacking has returned. He might not have made the MLS All-Star roster, but he very nearly made the U.S.’s “A” team over the past week.

Chris Wondolowski — The San Jose Earthquakes forward played his first nine games for the Americans without scoring, which is bad when that’s pretty much your entire job description. Then he exploded for a first-half hat trick against Belize and two more against Cuba, which is excellent, except that Belize and Cuba are not. Wondolowski missed a pair of chances against Costa Rica, the type of opportunities he needs to bury. Hold the phone on that “book him a ticket to Brazil” talk. He’ll get more minutes to prove he can score against better international competition, but he hasn’t shown that he can handle the decreased time he’ll have on the ball. That’s a harsh assessment of a man who is playing well, but he needs to answer that question in the affirmative if he wants to be part of the 23-man roster next summer.

Joe Corona — The former U23 standout got things started for Shea’s goal. He did so soon after coming on, almost immediately imposing himself on the proceedings in impressive fashion. Corona, the USMNT’s best player against Cuba, isn’t going to start for the first team soon, but he’s showing he can continue to become a contributor. He’s always had the vision and the creativity, but his impressive athleticism has been on display numerous times during the Gold Cup as he’s won header after header. There’s a very necessary fearlessness about the rising Tijuana star.

Oguchi Onyewu — The center back started against Guatemala and Cuba, making his first national team appearances in more than a year, wearing the captain’s armband in the latter match. Credit to him for working himself back into the mix, but his performance didn’t impress. Onyewu, never the fastest of players, looks to have lost another step and struggled for stretches. Klinsmann said he will replace players after the group stage, and Onyewu might be one of them. If that’s the case, you have to wonder if we’ve seen the last of the big man in the red, white, and blue.

Stuart Holden — The good news: The midfielder played in four straight games, going the full 90 minutes against Costa Rica for the first time since October 2011. The bad: He’s not yet the player he was, still a half-yard off and a half-second late. But flashes exist, and what he really needs now is playing time, which he’ll continue to get at the Gold Cup and with Bolton this fall. Whether the long road back leads to Brazil remains to be seen, but he continues to take steps in the right direction.

Mix Diskerud — He’s one cool cat who is now officially cap-tied to the Americans. Diskerud wants to go forward, always, which makes him useful in a tournament like the Gold Cup. The 22-year-old made a number of nice off-ball runs through the middle against Costa Rica, but his teammates missed his probing forays. He hasn’t scored, but he’s not afraid to shoot and continues to be one of the best volleyers on the squad. It’s a crowded American midfield, however, and he’ll need to stand out in the elimination stages.

Jack McInerney — There were high hopes for the young forward, who has 10 goals in 16 starts for the Philadelphia Union. He didn’t see the field, however, and is likely headed home. Nonetheless, McInerney — the purest American finisher to come — impressed in training and he’ll be back. His time is coming.

Kyle Beckerman — The dislike of the Real Salt Lake dreadlocked talisman runs deep, mostly due to the ugliness of his game. But the importance of his destroyer role cannot be underestimated on this young, talented, but not particularly defensively minded squad. If Klinsmann wants to see what the youth movement can do going forward, then he needs a player like Beckerman to break up counters and win the ball back. He fills this role brilliantly … but so does Jermaine Jones and, to a lesser extent, Michael Bradley and Maurice Edu. Right now, Beckerman is likely one of the last guys cut from the 23-man roster, but he continues to prove that ugly can be beautiful in its own way.

Brek Shea — The Stoke City by way of FC Dallas attacking mid was terrible against Cuba, but Klinsmann didn’t give up on him and threw him into the fray late against Costa Rica. (It’s a testament to Shea’s potential that he has more chances than hair colors.) Moments later, he had his first international goal in his 20th game. While it wasn’t a pretty finish — the shot curled into Pemberton, who managed to get a piece but not enough — it accomplished the only task that mattered: finding the back of the net. If Wondolowski earns praise for scoring, so should Shea.

After Shea’s goal, the passionate American supporter section started chanting, “We are going to Brazil,” which is probably true but not certain and definitely completely irrelevant given the context. Then again, “We are going to Chicago” — the site of July 28’s Gold Cup final — doesn’t exactly roll off the tongue.

It's Time for Some NL Midseason Awards

Q&A: New Phoenix Head Coach Jeff Hornacek on the Rebuilding Suns and the Glory Days of the Jazz