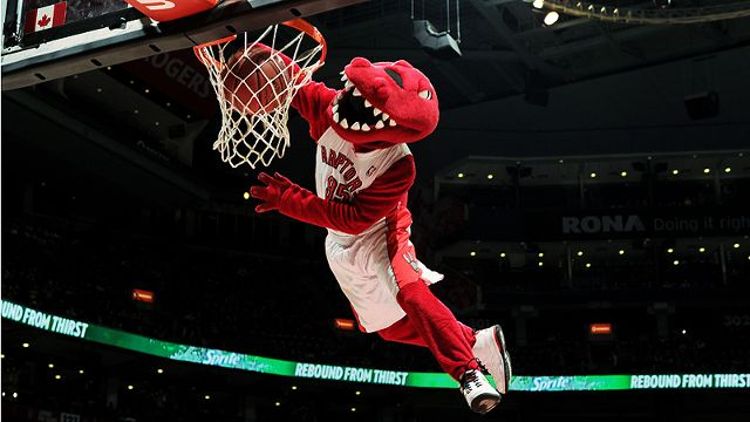 True story: There is an NBA mascot convention every summer, where about two dozen mascot performers get together, exchange best practices, show off their best highlights from the prior season, and even meet with various consultants from the league and mascot-related industries.

They also give out various awards, sort of a mascot Oscars — best video skit, best overall mascot for the year, that kind of thing. For several years, the mascots also created a joke award: the Craptor. It was a plunger, painted gold, that they awarded to whomever experienced the worst blooper of the season — the worst accidental pratfall, the video skit that flopped, or some other lowlight that television cameras had caught.

It was obviously named for the Raptor mascot, who tore his Achilles tendon this week attempting a stunt in a preseason game and will miss the rest of this season. The award, the mascots tell me, was never a shot at the Raptor’s skill as mascot. It was almost a tribute to the person behind the character, and that person’s sensibility. (I know him, but he insists on his anonymity, and I will of course respect that.) While other mascots might try to gloss over their worst moments, the Raptor would happily submit his for everyone to watch and celebrate, several mascots have told me. The Raptor is just self-effacing that way. The Raptor is a quiet person, and the other mascots saw him as a hard worker plying his craft in a forgotten market in a different country. The Craptor joke award stemmed from this combination of pity and respect for the Raptor’s humble nature, and it sort of spiraled out of control; the mascots have scrapped it in recent years out of respect for the Raptor.

The Craptor was always a bit incongruous, in that the Raptor mascot is widely considered among the very best and most diligent in the league. And that’s why today there is an outpouring of sympathy from all over the league about the Raptor’s season-ending injury — from fellow mascots, fans, Toronto team employees, and even Dwane Casey’s daughter, who wept upon hearing the news. What a tribute.

My in-laws live in Toronto, and my sister-in-law is a season-ticket holder, so I’ve seen the Raptor perform for years and years, dating back to long before I covered the NBA as a profession. He is easily one of my five favorite mascots in the league, and it’s not a stretch to say that over the last half-decade or so of lethargic Raptors basketball, the Raptor was the very best thing going on during game days at Air Canada Centre. The inflatable Raptor — generally portrayed by the same person, as is the case with most mascots — is a legend. Fans never tire of the bit in which he devours a cheerleader, or a security guard. The Raptor is also super-daring in the inflatable costume, even Rollerblading down the arena steps toward the floor in a bulky outfit that includes a 50-pound blower inside. You try doing that. 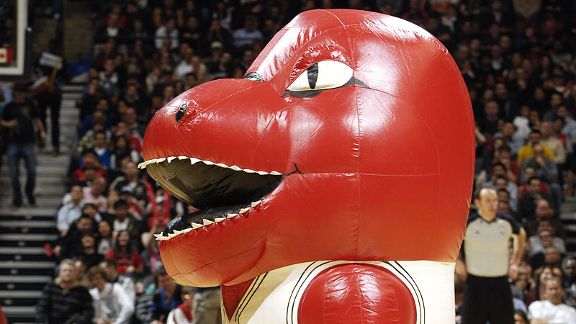 But the popularity of the inflatable Raptor has almost overshadowed the regular Raptor and all the brilliant stuff that guy does all over the floor. The Raptor is manic. He is a whirlwind of activity. My wife barely even watches games when we go together; she cannot take her eyes off the Raptor. Fans mostly pay attention to mascots when they have center stage, and the Raptor is fantastic at that stuff. He’s athletic, he can dance, he’s funny, and his video skits are high comedy — the perfect mix of levity and a type of violence, mostly directed at opposing “fan” characters, that is edgy without being threatening or uncomfortable. In one game against Miami last season, the big scoreboard played a skit in which the Raptor, walking around Toronto, came across a “Heat fan” playing Queen’s “We Are the Champions” on a boom box. Cut to the Raptor finding an aluminum baseball bat and smashing the boom box. Next skit: The Raptor is in yoga class, hilarious on its own, since a large dinosaur performing downward dog next to a bunch of young women in yoga clothes, everyone acting as if this is perfectly normal, is a great joke by itself. But lo and behold, the same Heat fan, wearing a Dwyane Wade jersey, happened to be in the Raptor’s yoga class, and he was one of those annoying grunters. Cut to the Raptor tossing a giant yoga ball, quite hard, flush in the guy’s face. Brilliant. And by the way: Mascots generally write and conceptualize all these skits on their own, with some help from an assistant. They are writer, director, and editor in lots of cases. If the skit fails, it’s on them, and them alone.

But the Raptor is just as good when the game is on center stage, leaving him to mill around the court and the crowd. That’s really where the magic happens for the best mascots. Oh, hey, there’s the Raptor clowning a security guard along the baseline, just trying to get the stone-faced guy to laugh. Oh, wait, he’s leaving to go taunt an opposing fan, and maybe to “accidentally” knock that fan with his tail on his way to the next interaction. Wait, hold on: Is he actually going to stand up along that wall in front of the first row of seats, use it as a balance beam, and attempt a freaking cartwheel on top of it? Yes. Yes, he is, just to entertain fans who might spot the stunt during game action.

Oh, now he’s approaching an unsuspecting fan from behind, trying to “bite” at his arm with giant dinosaur jaws, or maybe just stare at the guy’s head until he turns around, terrified to find Raptor inches from his face. Once that’s over, maybe the Raptor will stand in a fan’s way as the fan tries to return to his seat, and shift left and right as the fan tries to get around him. From there, it’s on to hugging people, entertaining kids, trying to eat a garbage can, or maybe swiping a bit of someone’s popcorn, before the next timeout requires a skit or a dance.

The Raptor’s energy reserves are endless, and the fans are the big winner as a result. The sadness popping up today isn’t some snarky meta-joke about the state of the Raptors franchise, or one of those “Ha, isn’t this ridiculous, let’s do a blog post on it and move on” bits of silliness that makes the Internet run. People are legitimately sad! And for good reason. The Raptor is a genius, a master of his craft. The in-arena experience in Toronto won’t be close to the same without him.

Get well, Raptor. We need you back healthy, and soon. There might have been an unflattering award at some point, but there’s nothing but respect today.