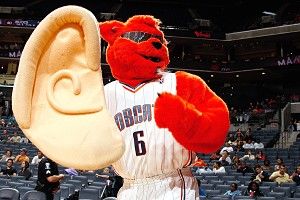 It started, as so many things in my life seem to start, with a tweet:

Can someone please explain CharlotteBobcats.com to me? Because what.

Fair question. Last week, the New Orleans Hornets won the first pick in the NBA draft lottery. It was a harsh result for the Charlotte Bobcats, who were coming off the worst season by any team in NBA history. To lose the top pick was bad enough, but the fact that the Hornets once played in Charlotte added an extra element of pain.

The Bobcats are not a problem-free franchise. In fact, they’re more like a comedy of errors than an actual basketball team, which is why the tweet made me excited. What oddities were in store when I followed the link? How had they screwed this up?

There are 30 teams in the NBA. If you go into a Web browser and type the full city-nickname combination and add a .com, 27 of those URLs will take you to the official team page. There are three exceptions.

1. NewOrleansHornets.com. This just leads to a crash page. Not sure what’s happening.

2. OklahomaCityThunder.com. This redirects to the URL “LetsPartyHearty.com.” A promising start, but unfortunately it just gives an “access forbidden” message.

3. CharlotteBobcats.com. Which, let me tell you, guys, is an honest-to-god masterpiece of absurdist comedy. When you land on the main page, this video awaits:

When I finished watching for the first time, it was hard to know exactly what I had just seen. The line, “Let’s face it — running is for children, and cowards, and thieves,” was funny, but the context escaped me. It seemed to be a commercial for a company called Gordies, and I genuinely couldn’t tell if that was a real thing.

What I quickly understood was that the website wasn’t affiliated with the NBA franchise. And when I realized that, I began to laugh. A lot. It belonged instead to a film/art studio called CharlotteBobcats.com, and as someone who loves absurdity, I sensed the start of a very satisfying story and began to explore. It’s tough to convey the overall impression of the website, but here are a few highlights:

1. The page banner, which reads: “THE OFFICIAL SITE OF THE CHARLOTTEBOBCATS.COM.” Has the word “the” ever been so subversive?

3. A number of ads for obscure companies that I legitimately enjoyed.

4. This video, called “Watch the Throne,” listed under “Experiments”:

The idea of an Internet surfer coming across this version of “Watch the Throne” while looking for the Bobcats’ website was almost deliriously funny to me.

And that’s just scratching the bizarre surface. There are a lot of videos on the site, all of them made by someone with definite talent and an off-kilter sense of humor. When I finished enjoying the special incongruity of experimental films on an NBA URL, I was left with some questions, so I navigated to the contact section and got in touch with Austin Saya, 27, and Rickey Kim, 31, the men behind the absurdist curtain.

Saya grew up in Syracuse, New York, but moved to North Carolina when he was 15. The Hornets had just moved away, and local businessman Bob Johnson was on the verge of bringing a team back to the city. In early 2003, Austin and his dad, Michael (who was casually interested in the business of the Internet), saw an article in the Charlotte Observer listing three potential names for the new NBA team.

“Two of them were completely absurd,” Saya told me. “And then there was one called the Bobcats. And we were all just thinking, This guy owns a television network. Why wouldn’t he name a team after himself? Bob Johnson. Bob-cats.”

Going on that safe hunch, Austin and his dad registered CharlotteBobcats.com in January 2003. Days later, the name was confirmed. Over the next four years, the team repeatedly tried to buy the domain name. It started with what Saya called “super lame” offers, including season tickets for a year. Met with rejection, the team upped the offer to lifetime season tickets.

“We weren’t into that,” Saya said, “because one, we were huge Hornets fans and we were mad that they left town, and two, the Bobcats have never been good. Ever. In their whole history.”

Undeterred, the team started tacking on monetary values to the lifetime tickets, beginning at $20,000. But Michael Saya held out. The offer finally rose to just under $100,00 by 2007, but the Sayas had their own figure in mind, and it was substantially higher. They also had the luxury of not caring whether they sold the domain name, and so it sat dormant. The Bobcats never raised the offer again, and Austin told me that the team hasn’t been in touch for the past five years.

In the meantime, the e-mails poured in. Austin had set up a simple splash page with a contact address, and the inbox was immediately flooded. “I must have 20 or 30,000 e-mails from people trying to get jobs,” Saya told me. “Executives looking to be hired, cheerleaders wondering when tryouts began. You name it, we definitely received it.” While we spoke, Kim reminded him of their favorite e-mail. “Oh yeah!” said Saya. “We got an e-mail from the Harvard Business School wondering how they could go about getting Michael Jordan to speak at some commencement ceremony.”

In 2011, after finishing his master’s at the Savannah College of Art and Design, Saya and Kim finally met in downtown Los Angeles. They shared an experimental approach toward art and a love for pranks and absurdity. By April, they began making films together. Saya had already flirted with the idea of putting content on CharlotteBobcats.com; he saw the amount of traffic it received, even in its neglected state, and began to consider the possibilities. In early 2011, he filmed a man in an empty room attempting to open a suitcase. There was just one camera angle, and no dialogue, and it lasted 25 minutes.

“We put that video on loop on the website, and it got like 15,000 hits in a few days,” he said. “And later on we discovered on a bunch of sports blogs that people were talking about it, and they were wondering, ‘What’s going on with the Charlotte Bobcats website?’ And it was awesome, because eventually as you went down on the message boards, you’d see they were actually talking about the video, and some of the people would watch it all the way through. All 25 minutes. And the guy doesn’t do anything!”

As Rickey and Austin began making experimental films, they put them on the site. They even designed a logo, a white windowless monolith in a black box. There was an appealing practical aspect to using the site, which was the instant, unwitting audience that came to the site every day in large numbers. But Saya and Kim are pranksters at heart, and they delighted in the artistic absurdity of the situation.

“We try to keep layering on top of where we’ve been,” Kim said. “It gets more and more ridiculous. It’s about these perceived notions of what things are. Not just in sports, but in general. I feel like it’s kind of an interesting example of young kids who are willing to just test the boundaries a little bit and see what can happen. And also, we have the ability to redefine something, which is kind of bizarre.”

As they added videos — most of them bizarre in their own right — Kim and Saya took steps to use the URL to their advantage. First came the banner: “Official site of the CharlotteBobcats.com,” a coy and (to me, anyway) hilarious twist on official pages of actual teams everywhere. Then they began adding a bobcat’s roar, or some approximation thereof, to the end of certain videos, including Watch the Throne. Then they started making fake commercials, like the Gordies spot on the splash page. Both were resolved in their plan to continue in that direction, and the ideas they have in mind aren’t necessarily connected to anything that came before. Their latest concept, for example, is to change the whole website to have the light, artificially happy vibe from commercials for antidepressants like Zoloft.

“It would be images of young people hugging each other, just pure happiness, everyone just joyful, and there’s no reason why,” Kim explained.

“I mean, to us the whole thing is a big joke,” said Saya. “It’s funny and hilarious that this is even happening.”

But while they recognize and exploit the humor, there’s a serious side to the art they’re creating. They’ve sent their videos to different directors they admire, like music video guru Chris Mills, and have received positive feedback. They’ve also pitched companies for ad campaigns, creating imaginative PDF files that attempt to capture the emotional goal of their proposal — and not without a large dose of the absurdity that guides their website. In a proposal to Hudson Jeans, for example, they listed the following under “visual references”: Kurz und Schön opener, a photo of JFK in sunglasses, The Passion of Jeanne D’Arc, the video Iron by the band Woodkid, The Invisible Man, and Le Samurai, a Jean-Pierre Melville film from 1967.

They didn’t succeed with Hudson Jeans (it would be fascinating to have witnessed the company’s reaction), but they did with a lifestyle bikini company called Bubululu Malibu. Their concept of the models as Native Americans concluded with this paragraph:

This piece is built around the idea of ceremony and ritual. The music will be specifically scored to embody an ambiance of simplicity within an earthy environment. At the end of the film we cut to the reverse revealing the Native American Queen rising from the water in full headdress regalia returning to her rightful place among her people.

Bubululu agreed, and the end result is an apt fulfillment — haunting, sexy, and strange. They made no money, but Saya and Kim are pragmatic about the difficulty of succeeding in their chosen industry. Exposure is the first step, and after a little more than a year, they’ve forged a strange path to recognition. At the end of last week, after the Bobcats failed to land the top pick, several short blog posts began to appear across the Internet, openly wondering about the strange website. And with every new bit of publicity, Saya and Kim see a plan coming to fruition.

But the impish spirit of CharlotteBobcats.com remains important to both. They were happiest in our conversation when I told them that the work gave me a New York feel, as opposed to Los Angeles, and Kim remembered the times they’ve shown their films at art shows. “Even then,” he said, “we’re laughing at ourselves. Everyone else is doing art, but we’re doing something else. It’s surreal, it’s meta, I don’t know what it is. Postmodernist.”

“When you boil it down,” Saya said, “we’re just messing with the Internet. I think of it as Internet sabotage.”