The State of the Warriors: Score and Be Scored Upon 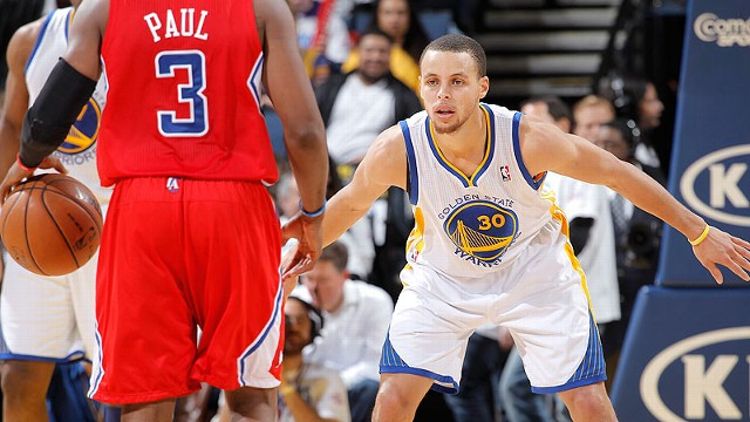 Stephen Curry just wrapped one of the most scintillating two-game stretches you’ll ever see, slicing up Indiana and New York on back-to-back nights for 92 points on 32-of-48 shooting — including an insane 18-of-23 from 3-point range. He’s on pace for perhaps the greatest 3-point shooting season in NBA history, and he combines that high-volume accuracy with a wonderful arsenal of creative, flippy, and spinny interior shots. When Curry is on, he’s one of the league’s half-dozen most entertaining players, and he transforms the Warriors into a must-watch.

But it’s time to worry that games like Curry’s 54-point explosion last night in New York are becoming almost emblematic of this Golden State season — a fun, score-first bonanza the Warriors ultimately lose because they cannot stop anyone on the other end. Their defense, an important early-season story line, has fallen apart. The Warriors are 7-10 in their last 17 games, and have allowed 109 points per 100 possessions in that stretch, a mark that would rank dead last in the league. After hanging around the top 10 in that category, and then just below that range, the Warriors have fallen into a four-way tie with the Lakers, Nets, and Mavericks that spans spots nos. 16-19. They’ve been outscored for the season, and they are 12-15 in their last 27 games.

Basically: They look like playoff roadkill instead of a frisky first-round threat with a terrifying home-court advantage. And just making the playoffs would be an issue if not for a much better-than-expected record in close games, including a one-point win over the sad Timberwolves in Minnesota over the weekend; the Warriors are 13-6 in games that have been within two points in the last two minutes, the second-best mark in the league, and any record that far above .500 in such a small sample size is at least in part the result of good luck. (That’s not to say smart play-calling and late-game decision-making have played no role at all; that Draymond Green game-winner against Miami still resonates.) Golden State also finishes with 16 of their last 23 games at home, and they are still holding out hope Andrew Bogut might be able to work as a reliable contributor at some point.

Bogut hasn’t helped the team’s defense at all yet, but he has barely played. Most of the key Golden State lineups have been below-average on defense, and the four-man Curry–Klay Thompson–David Lee–Jarrett Jack combo has allowed nearly 107 points per 100 possessions in 543 minutes, per NBA.com. (Only one Golden State four-man group has logged more time.) The group is still a net-plus because of its ridiculous scoring efficiency, but that is not a recipe for victory against good defenses in the postseason.

One thing they might reconsider entirely: their zone defense. It has been a disaster, especially during these last 15 games or so. Even worse news: The Warriors have played zone on 8 percent of their defensive possessions, easily the largest share in the league, per the stat-tracking service Synergy Sports. (Synergy’s categorizing isn’t perfect, and some possessions move quickly enough that it is hard to tell whether a defense is in a straight zone, a man-to-man base that incorporates some zone principles, or some other kind of hybrid.) Golden State has allowed .974 points per possession for the season while playing zone, the ninth-worst mark in the league, according to Synergy.

Both of those numbers have jumped over the last 17 games, even though Bogut, a stout defender whose presence in theory should fortify Golden State’s base man defense, returned for a large chunk of those games. The Warriors in that stretch have played zone on 11.7 percent of defensive possessions and allowed an unthinkable 1.137 points per possession while doing so. To put that in perspective, based on Synergy’s metrics, the average half-court possession yields about 0.9 points per possession.

And if you watch the games carefully, you see it: Golden State’s zone is just broken. Opponents over the last 17 games have shot 52 percent on 2-point shots and 43 percent from deep on about 3.5 3-pointers per game. A zone in the NBA, given the defensive three-second rule, requires constant communication and pinpoint timing. The five defenders have to shift around the court as the opposing offense swings the ball and moves its own players around the floor. Smart teams attack a zone by doing any number of things at once — moving the ball side to side, trying to pass the ball to that sweet spot at the foul line in the center of the zone, and moving players from one corner to the opposite corner.

Other teams with less refined zone offenses simply run their normal pick-and-rolls and post-ups, hoping to find a mismatch on the block or cause some confusion by running a classic man-to-man play against a defense that has basically opted out of defending that play in its normal way. Should we switch the pick-and-roll? Or should we improvise into a sort of man-to-man defense of the pick-and-roll, with a guard going over the pick while a big man sags into the lane? What if the two defenders involved are not the sort of guard–big man pair that would normally defend that play?

Dealing with all this stuff requires continuous yapping and immediate, precise reads. That’s why any zone possession will result in loads more pointing and screaming than a normal man-to-man possession.

And this is where Golden State has consistently failed. They talk plenty, but the talking leads to confusion and missed assignments instead of crisp, confident adjustments. The Warriors’ zone has sprung leaks everywhere. Simple screening action up top has yielded wide-open 3s after two Golden State defenders miscommunicate over whether or not to switch positions at the top of the zone. The Warriors have lost track of shooters sprinting along the baseline from one corner to the other as the offense moves the ball around up top, a big reason for that robust opponents’ shooting percentage on 3s against the Warriors’ zone. For the season, the Warriors have allowed 5.8 corner 3 attempts per game, the eighth-highest figure in the league, and opponents have hit 38.6 percent of those attempts — about league-average, per NBA.com. Those numbers are both up slightly — 6.3 attempts, 41.1 percent shooting — over Golden State’s last 17 games.

But it isn’t just the 3-pointers. Teams have been able to poke holes deep in Golden State’s zone via cuts and passes, and they are getting dunks, layups, and other high-percentage shots against it. Golden State’s back-line defenders have suffered from the same sorts of fatal hesitations — who should be where right now? — when teams work the ball inside.

Here’s the upside: Golden State piled up just enough early wins to take something like the long view on an issue like this. They are still a very safe bet to make the playoffs, and so they can afford to experiment a bit with a tactic that isn’t working right now but may pay dividends later. After all, any team giving the Carl Landry–Lee big-man combination heavy minutes is going to have to play around with some defensive trickery now and then. And playing lots of zone with Bogut worked as a way to ease him back into game-ready conditioning, since zone defense allows for a bit more camping out than man-to-man.

But Golden State was playing better defense when it leaned more upon its man-to-man foundation — a system Mark Jackson and his staff revamped over the summer — and their recent struggles have probably taken the Warriors out of the running for the no. 5 seed. That’s a big, big thing in a top-heavy conference. Golden State still has two months left to rediscover its defense in time for the playoffs.