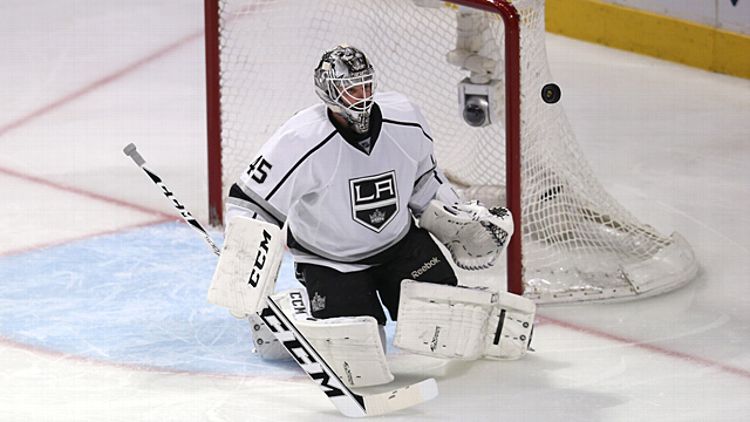 The NHL offseason features a steady stream of news and transactions, most of which are fairly straightforward. Even the big moves that grab headlines tend to make sense on some level. As a fan, you spend most of the summer hearing about the latest news and thinking Yeah, that sounds about right.

But every now and then, you get the other end of the spectrum — the moves that make you stop and think Wait, what? Most fans can come up with plenty of colorful words to describe these decisions, and will be more than happy to loudly share those words with you while angrily waving an empty bottle of scotch, but we’ll be polite and just go with “perplexing.”

(Note that “perplexing” isn’t necessarily a synonym for “bad,” since it’s quite possible for these moves to work out just fine. Similarly, you can make a pretty strong argument that, for example, Toronto giving David Clarkson a seven-year deal was a mistake, but there was nothing perplexing about it — the Leafs love physical players and don’t seem to care very much about cap management.)

Here are a half-dozen of the offseason’s most perplexing moments so far.

The Maple Leafs trade for goaltending

The 2013 Maple Leafs were a team with an inconsistent blue line and a lack of a no. 1 center, but they got by largely on good luck and excellent goaltending from James Reimer. So it goes without saying that when the offseason arrived, their first order of business was to replace the goalie who’d just saved their season.

The price for acquiring Jonathan Bernier from the Kings wasn’t especially high (two serviceable young players in Matt Frattin and Ben Scrivens, plus a draft pick), but that’s not the point. The Maple Leafs are a team with major holes and limited assets available with which to plug them, and they chose to use some of those assets to try to upgrade a position where they were already fine.

None of which is to say that Reimer is a sure thing. He’s young and relatively inexperienced, and his career numbers are good but not eye-popping. But you could say exactly the same things about Bernier, who’s actually even more unproven — he’s played 40 fewer career games than Reimer, and has never made a start in the playoffs.

And yet the Leafs saw fit to trade for him and give him a two-year contract. They even retained $500,000 in salary in the deal, which is contributing to a tight cap situation that’s making it difficult to get the rest of their restricted free agents signed. All of that for an upgrade that may not even end up being an upgrade at all.

And yes, I could have also added the Mikhail Grabovski buyout (to free up the cap space to re-sign the inferior Tyler Bozak) to the list, too. I didn’t want to beat up on the Leafs too much, so I’ll just slip it in here instead.

The Flames turn to Karri Ramo

Karri Ramo is probably going to be the Flames’ no. 1 goalie next year, so now would be a good time to start pretending you have any idea who he is.

The 27-year-old played parts of two seasons with Tampa Bay from 2007 to 2009, putting up poor numbers in a backup role. He then headed for the KHL, where he’s spent the last four years. The Flames acquired his rights from Montreal as part of last year’s Mike Cammalleri trade, in what at the time was largely dismissed as a throw-in. But Ramo developed into an all-star in the KHL, and now the Flames have lured him back to North America with a two-year, $5.5 million deal. He’ll compete with Joey MacDonald for the starter’s job, though you have to imagine that the Flames aren’t expecting to pay almost $3 million a year to a backup.

But while you can certainly file this move under “perplexing” given Ramo’s lack of experience and profile, it’s one that could end up working well. There’s a precedent here, since the Flames spent the last decade riding a Finnish goaltender who developed into a superstar at the age of 27. Maybe Ramo ends up being the latest in a long line of European goalies to unexpectedly emerge as NHL starters.

Or maybe he ends up being a bust. That wouldn’t be the worst result in the world either, since the Flames are a rebuilding team and landing a top pick in what’s expected to be a solid draft would help that along.

The only way this doesn’t work out is if Calgary is bad, but Ramo steals just enough games to cost them a top pick. That’s the absolute worst-case scenario, so since this is the Flames we’re talking about, let’s just go ahead and pencil it in.

Fresh off a dominant playoff run, Rask cashed in to the tune of an eight-year, $56 million extension. And he might just deserve it, since there’s little question that Rask is one of the best goalies in the NHL today. In fact, his career .927 save percentage would be good for first place among active players by a healthy margin if he qualified for the list.

But he doesn’t qualify because he hasn’t played enough, and that’s where you may start to get nervous if you’re a Bruins fan. Rask is 26 and has played four full seasons in Boston, but last year was the first time he held the full-time starter’s job for an entire year, and he’s still never played more than 45 games in an NHL season.

Having to split time with a Vezina winner like Tim Thomas isn’t exactly a red flag. And goalies tend to reach their peak later than forwards and defensemen, so the Bruins may well be locking in a guy just entering his prime.

But it’s also not unusual to see a goaltender get off to a strong start and then regress, and that makes the eight-year commitment seem like a significant risk. The Similarity Scores list at the bottom of Rask’s Hockey-Reference page includes names like Jose Theodore, Pascal Leclaire, and — perhaps most terrifying of all — Jim Carey. And of course, the NHL’s recent history of long-term goalie contracts has been mostly grim.

That’s the worst-case scenario and there’s no reason to think it’s likely, but even a small step back by Rask could make this contract seem like a mistake. In a league where the trend seems to be toward teams doing just fine with inexpensive goaltending, the Bruins’ decision to invest heavily in Rask sticks out.

The Oilers gamble with Sam Gagner … and win?

Gagner and the Oilers were scheduled for a Monday-morning arbitration hearing. Gagner, coming off the best season of his career, was reportedly asking for $5.5 million, with the Oilers offering $3.5 million (arbitrators can pick a number in the middle).

But the more important part of the equation was the term. An arbitration deal would have been for just one year, making Gagner an unrestricted free agent after next season at the age of 24. That would make him the youngest player to ever reach the open market with anything even approaching a star’s résumé, and seemed to give him a ton of leverage to extract a long-term deal. The Oilers are stacked with young talent and have money to spend, but they have to keep an eye on their cap space both now and in the long term. There was even talk that they could be forced to trade Gagner.

And it was all because they screwed up by not getting an extension done last year. The whole thing was shaping up as yet another Oilers disaster, one that some fans saw coming years ago.

And then, just hours before the hearing on Monday, Gagner signed. Three years, $14.4 million, for a cap hit of $4.8 million. Gagner gets paid, and the Oilers buy a few years of his unrestricted free agency without having to overcommit. It was a good, fair deal that made sense for both sides.

Unlike the rest of this list, the Capitals warrant a mention based on what they haven’t done. Which is pretty much anything.

They lost their second-leading scorer, Mike Ribeiro, to Phoenix via free agency. They signed a handful of depth players to two-way contracts. And they extended Karl Alzner. That’s pretty much it, and for many observers it’s been nowhere close to enough.

Washington’s not the only team to have an uneventful summer — the Flames, Avalanche, and Sabres, for example, have also been mostly quiet. But those teams are rebuilding, so patiently staying on the sidelines when the money starts flying around can make some sense.

But the Capitals are quasi-contenders whose championship window is still open. They have a lineup featuring the reigning MVP, and they’ve just moved into a much tougher division. It’s surprising to see them do so little.

Jaromir Jagr signs with the Devils

This one makes sense from New Jersey’s side. As you may have heard, recent events freed up some cap space and created a job opening for a top six winger. And it’s not like the aging Jagr will have trouble fitting in — the Devils already have five other players who are 35 or older, including fellow 41-year-old Martin Brodeur.

But from Jagr’s perspective, this seems like a strange choice, even for a player we’ve come to expect will surprise us. The Devils are hardly on anybody’s list of Stanley Cup contenders, and New Jersey isn’t exactly the league’s most desirable destination. So Jagr’s decision seemed to come out of left field.

Or maybe not. Remember that last year, Jagr signed with the Dallas Stars before being dealt to the Bruins at the trade deadline. That deal ended up getting him to within two wins of a championship. Maybe Jagr’s figured out that if he wants to chase another ring, the best way to do it is to hold off on picking a final destination for as long as possible.

The plan would look like this: Sign with a team where you’ll be comfortable for a few months, with a management team you can trust. Let the first half of the season play out, separating the pretenders from the contenders. And then, at the 2014 trade deadline, pick your bandwagon and hop aboard. Jagr gets another playoff run, the Devils get some picks or prospects, and everyone’s happy.

Or maybe that makes too much sense. So let’s stick with the “perplexing” label until proven otherwise. After all, it’s more fun that way. Pass the scotch.