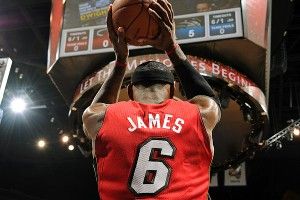 LeBron James is not the Incredible Hulk or Tupac. He does not thrive on hate. He is not fueled by rage. I don’t think he’s fueled by love, either. He plays basketball like an Apache helicopter and bites his nails. We’re not going to know what basketball means to this guy until the (still inevitable, I think) day he wins a ring. Maybe he’ll have a Jordan-crying/KG-screaming moment. Maybe he will just clap baby powder in our faces. Maybe he’ll just bite his nails some more.

I bring all this up because whatever moon is in whatever house of some far-off planet, which means it’s Pile-On LeBron Day. First it was Kendrick Perkins. (“I just feel [James] is always looking for attention and he wants the world to like him.”) Then it was Larry Legend on the B.S. Report. (“It would have probably been more fun to play with LeBron, but if you want to win and win and win, it’s Kobe. Not that LeBron’s not a winner, just that [Kobe’s] mind-set is to go into every practice, every game, to get better.”)

LeBron’s response was, well, very LeBron. It was a little bit corny (“For me, social media and Twitter is all about connecting with your fans. From day one, that’s why I got to Twitter, to connect to my fans”) and a little bit defensive (“It’s simple, [Kobe] has five rings and I have none, so it’s easy to say that”), with a pinch of petulance added for good measure (“You could be watching cartoons with your kids and you don’t like it, you say, ‘Blame it on LeBron.’ If you go to the grocery store and they don’t have the milk that you like, you just say, ‘It’s LeBron’s fault'”).

I wish this would stop because it’s getting in the way of arguing about All-Star reserves and checking out Jeremy Lin GIFs. But the main reason I find this exhausting is because all this criticism, concern trolling, and backseat driving is clearly having no impact on LeBron James WHATSOEVER.

LeBron is not using Perkins’ or Bird’s words as fuel. If he is not motivated by what people said about him following his playoff collapses or The Decision, then he’s not going to care about a cyclops like Perkins teasing him about his Twitter account. The truth is that this player of unlimited potential is actually, as a competitor, a finished product. The sooner we all get used to it the better for us. LeBron does not run on hate; his tank takes something else.

I haven’t been this excited to watch a bunch of old guys muck it up since I saw Space Cowboys on opening night. It’s Lakers versus Celtics at the Garden!

Mo Williams, Los Angeles Clippers guard and poet of the human heart: “If you have a girlfriend and she tells you she loves you every day, obviously you know she loves you.” And how could the Clippers express their love? “The way they tell you they love you every day is by signing you to a contract extension.”