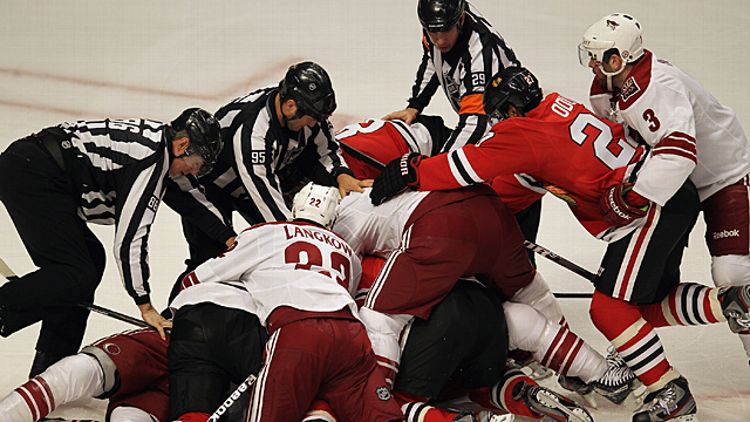 The hockey world is still buzzing over Erik Karlsson’s horrific injury, with the debate raging on about whether the awkward hit by Pittsburgh’s Matt Cooke should be considered dirty.

Well, maybe “debate” isn’t the right word; outside of Ottawa, the play is mostly seen an unfortunate accident. But “raging” probably still fits, at least when it comes to minority opinions like this tirade from Senators owner Eugene Melnyk.

But the bigger problem here is that we often don’t even know what “dirty” means. The term can describe different things to different fans, and these days it casts a wide enough net that it is often meaningless.

We need more than just “dirty” or “not dirty.” So I’ve taken a crack at breaking down the seven levels of dirty. I’ve also included some examples — a list that, unfortunately for hockey fans, is far from definitive — a well as the short- and long-term consequences. It won’t settle all the arguments, of course, but at least it might help us figure out what we’re arguing about.

What is it? These are the plays that aren’t necessarily “dirty” in the sense that they’re not really dangerous, but they still violate “The Code.”

Examples: Giving a goalie the snow shower. Shooting a puck into the net after a whistle. Excessive face washes. Smiling, apparently, if you’re Nail Yakupov.

Who does it? Pests, agitators, and other forms of human vermin. Players who are required by law to always be described as “guys you hate to play against but love when they’re on your team,” even though any fan with a functioning soul will hate them anyway. Also, the guy on your beer league squad who wears no. 69.

The immediate reaction: A scrum. Then the whole thing is forgotten by the next commercial break.

The long-term fallout: You fight off the sinking feeling that stuff like this makes you like hockey slightly less than you used to.

What is it? Fighting gets its own category, since at this point, fighting in the NHL seems to exist in a strange alternate plane of reality.

Examples: Going after somebody outside your weight class. Hitting a guy when he’s down. Being the third man in. Fighting with a visor without offering to take it off. Performing a kamikaze dive into the opponent’s bench.

Who does it? Players who don’t follow “The Code.” (Note: Nobody can agree on what “The Code” is.)

The immediate reaction: The announcers solemnly intone that “that’s the sort of thing that nobody wants to see in our game.” Three hours later, the incident has 1 million views on YouTube. Every second member of the hockey media writes identical anti-fighting columns, which nobody reads.

The long-term fallout: The perpetrator still gets referred to as “a good guy,” because by definition anyone who fights in hockey is a good guy.

What is it? These ones always cause a debate, because the difference between clean and dirty can be razor-thin. Such plays are undoubtedly dangerous and probably illegal, but you can convince yourself that they were just clean hits that missed by a split-second and/or few inches. These are the plays that hockey fans (and Brendan Shanahan) can end up analyzing frame by frame and still never agree on.

Examples: Hitting a player from behind when he turns into the hit at the last second. Knee-on-knee hits when one guy tries to jump out of the way. Pretty much any hit in which the head is the “principal point of contact” until we figure out what that actually means. Every body check Raffi Torres has ever thrown in his career.

Who does it? Anyone, though some players mysteriously seem to be way more inclined than others. Funny how that works.

The immediate reaction: Barring a long history of priors, the perpetrator gets away with a fine or a minor suspension. You get fired from your job after spending 16 consecutive hours arguing about the hit in the comments section of a fan blog for the opposing team.

The long-term fallout: A player can often get away with this sort of play once or twice, but when it becomes a habit (e.g., Raffi Torres’s leaping hits, Bryan Marchment’s knee-on-knees, Matt Cooke’s blind sides), the reputation will follow him forever.

What is it? The dirty play that defies description, either because it’s so bizarre or so out of character for the player (or both).

Who does it? The last guy you’d ever expect.

The immediate reaction: “Dude, rewind that, there’s no way he actually just did that.”

The long-term fallout: Everyone sits in stunned silence for a while, then eventually agrees to never mention it again.

Level 3: All About Intent

What is it? These are probably the toughest plays of all to judge, since the “dirty” factor is almost entirely about the perpetrator’s intent. While often resulting in significant injury, the play itself isn’t necessarily dirty depending on how you read the rulebook. But something seems … off. Mix in a player’s reputation or some history, and you’re left wondering Wait, did he do that on purpose? If not, it’s an unfortunate accident. But if so …

Who does it? The guy you always suspected was up to no good.

The immediate reaction: Chaos. There’s instant disagreement between homers on either side about how to judge the play. Columnists covering the two teams involved immediately start trying to troll the other side’s fan base. The league reviews the play and inevitably determines there’s not enough evidence for a suspension.

The long-term fallout: Nobody ever agrees on what happened. Friendships end. Families are destroyed.

What is it? This is the sort of dirty play that everyone agrees is dangerous and indefensible. There’s no debate over rule interpretations or intent. The only thing that saves this from being a Level 1 is that it seems to have been a heat-of-the-moment decision as opposed to something even more sinister.

Who does it? Tie Domi and Chris Simon, apparently. Come to think of it, fighters seem disproportionately predisposed to this sort of play even though they’re supposed to be the ones enforcing “The Code.”

The immediate reaction: Universal condemnation (unless the victim was Ulf Samuelsson, because hey, come on). A lengthy suspension that absolutely everyone will complain about, though they can’t agree whether it was too long or too short. Don Cherry issues a passionate condemnation/defense, depending on the nationality of the players involved.

The long-term fallout: Fans of the perpetrator’s team get awfully quiet for a few days. The incident will follow the perpetrator for the rest of his career but, after a suitable time, his fans will start insisting he’s a “good guy” again. Nobody else ever does.

What is it? The mother of all dirty plays. This is the worst-case scenario — a player actually thinks to himself I am going to try to end that guy’s season, comes up with a plan of attack, and then goes over and carries it out. The whole thing might take only a few seconds to unfold, but it’s long enough that nobody can claim the perpetrator didn’t know exactly what he was doing.

Who does it? Players who shouldn’t be allowed near a hockey rink ever again. (Of course, they will be.)

Examples: Todd Bertuzzi on Steve Moore. Marty McSorley on Donald Brashear. Dale Hunter on Pierre Turgeon. And, at the risk of permanently losing my Canadian passport, Bobby Clarke on Valeri Kharlamov, though back then nobody seemed to care.

The immediate reaction: Shock. Horror. A potentially career-threatening injury to the victim. The perpetrator cries at a press conference while claiming that he’s “not that sort of player” even though he just proved beyond all doubt that he is. A massive suspension. Lawsuits. The very real possibility of police involvement, especially in Canada. Hockey gets mentioned on ESPN for the only time all year.

The long-term fallout: Other than “having it happen in 1972,” there’s really no way to recover a reputation after committing this sort of play. Nor should there be.