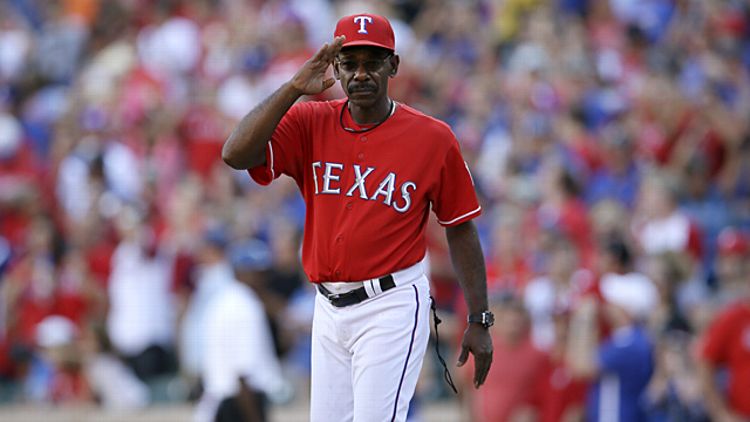 On Sunday, Ron Washington walked to the mound and did one of those things that makes us Rangers fans start moaning and lighting votive candles in front of a shrine of Oddibe McDowell. The Rangers were facing the Angels, whom — I think I’ve got this right — they needed to beat so they can beat the Rays so they can beat the Indians so they can face the Red Sox. Suffice it to say, Texas had to win. It was the top of the sixth. The Rangers were leading, 2-1. Their ace, Yu Darvish, had thrown 84 pitches. There were two outs and runners at first and second. Noted Rangers émigré Josh Hamilton was batting. Wash — this is what everyone calls him, so that’s what I’ll call him here — went out and removed Darvish.

Huh. Why did Wash pull one of the best pitchers in the American League with the season on the line? The Rangers reliever, Neal Cotts, came in and gave up a game-tying single. (To Hamilton! Jesus.) But then the Rangers scored four more runs, finished a sweep of the Angels, and will play past the 162nd game for the fourth time in four years. This — the strange mix of strategic ineptness and aggregate success — is the riddle of Ron Washington.

This isn’t just fans and writers carping about the occasional pitching change. This is Wash doing things, repeatedly, that seem to harm the Rangers’ chances to win. After a September 22 loss to the Royals, ESPN’s David Schoenfield noted Wash’s bizarre use of his bullpen. In that game — which progressed to a 0-0 tie in the bottom of the 10th — Wash bypassed other options and brought in Joakim Soria, whom Schoenfield said was the Rangers’ fourth-best reliever. Justin Maxwell hit a walk-off grand slam for the Royals.

Two days before that, a similar Wash blunder was logged by the writer Joe Sheehan in his subscribers-only newsletter. This time, Wash handled a bases-loaded jam by turning to … Neftali Feliz. Feliz was once a very good closer, but he’d pitched 4⅔ innings all season. As Sheehan wrote, “Washington took a pitcher coming off Tommy John surgery, who had been handled as a rehab case from the time he joined the team three weeks prior, and inserted him into a bases-loaded, two-out situation on the road in a game that the Rangers needed to win to hold onto their lead in the wild-card race.” Feliz walked in the go-ahead run.

There’s a lot more. There was Wash’s litany of decisions in Game 6 of the 2011 World Series. There was the mountain of at-bats he gave to Michael Young last year, as Young threw up (the best way to put it) an OPS of .682. There was the time he yanked Darvish from last year’s wild-card game against the Orioles. You’d be hard-pressed to come up with a defense of Wash’s tactics as a manger.

“No matter how the Rangers season ends,” Sheehan wrote, “Washington has to be relieved of his job.” Schoenfield thought the same thing.

So, wait, why is Wash still managing the Rangers? A few years ago, I asked Texas GM Jon Daniels about this. Daniels said that Wash’s great talent was his ability to keep his team level over the course of a long season. This is a largely unquantifiable skill: the use of butt pats and Real Talk and amateur psychology and nonverbal communication, all of which eludes most of us. After Sunday’s win, MLB.com’s Richard Justice wrote, “[I]t’s his close relationship with his players — trust is a two-way street — that has kept the Rangers going.”

Basically, Ron Washington is an intangible. A wonderfully profane, chain-smoking, Stengelian intangible. In North Texas, where Wash is a singular figure, the favorite Washism is: “That’s the way baseball go.” But last week, I think Wash topped himself. Talking about the Indians’ decision to sign his pal Jason Giambi, who’d just hit a walk-off homer, Wash said, “Last night bona fided their reason.” Only Wash could sneak that phrase into the New York Times.

I interviewed Wash at spring training a couple years ago, at an outdoor picnic table. He provided a lot of intangibles then too. I watched Wash use the 40-foot walk from the clubhouse door to me to puff on a cigarette, which he quickly stubbed out upon reaching the table. I heard him talk un-self-consciously about his cocaine use during the 2009 season. (The Rangers, who still employed Hamilton, were then speaking the language of AA.) A while later, after Wash threw batting practice — he throws a lot of BP — I sidled up to him and he told me about his love of John Grisham novels. Although it has nothing to do with his management of the clubhouse, this is another of Wash’s intangibles: a sense of real-dudeness that drifts into the sports pages, that provides a welcoming face for the franchise.

Even Wash’s ostensibly boneheaded decisions can have an intangible subtext. Lone Star Ball’s Adam J. Morris offered a reading of Sunday’s Darvish yanking that suggests Wash and his pitching coach, Mike Maddux, might have known something about their pitcher the rest of us didn’t.

It’s also worth mentioning that Wash, who was hired by Texas in November 2006, is the winningest manager in the history of the Rangers. Even this year, he dealt with crippling losses to his rotation (Matt Harrison, Colby Lewis) and a 50-game PED suspension of his best slugger (Nelson Cruz). He still won, despite another late-season swoon. But a few weeks ago, Wash admitted, “I’m concerned about my job.”

He probably should be. Because when you stake your livelihood on your intangibles, on things no one else can quite see, the only number you can offer in your defense is wins. That is not a sabermetrically sound stat. But as Wash would be the first to tell you, he isn’t a sabermetrics guy. If Texas doesn’t go deep in the postseason, I’m guessing Wash will be to the Rangers what Avery Johnson was to the Dallas Mavericks. He’ll be the guy who took them further than they ever got, but won’t ever get to take ’em all the way.