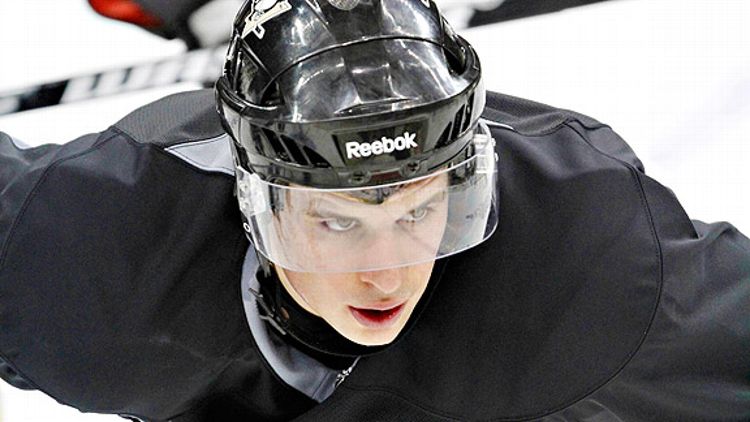 It’s been more than 10 months (10 months and 16 days in case anyone was counting) since Sidney Crosby, the National Hockey League’s crown prince, last graced one of its games. He’s missed 68 of them after suffering a concussion in early January: 41 last season, seven in the playoffs, and another 20 this fall, a dismal streak that will finally end Monday night. It always seemed this day was just around the corner, and it also seemed this day would never come.

As Crosby’s absences accumulated, the narrative surrounding them became increasingly hectic. He’ll be back in a couple of weeks. Any day now. He’s feeling better. He’s skating with the team again. He’s just resting for the playoffs, there’s no need for him to rush. He’ll be back next week. He’s been mishandled. He’s irritated with the league and trying to make a statement; prove a point. He’s seeing doctors. He’s having headaches. He’s playing mind games. He’s playing it smart. He’s such a pansy, Cindy Crosby. He’s won a Stanley Cup and an Olympic gold, he ought to hang it up. He can’t handle any bright light. He’s keeping everybody in the dark. He’s been working out all summer. He’s been shut down since July. He’ll be back for training camp. For opening night. Not this season. Maybe this weekend. Maybe never.

But now, for real this time: He’ll be back Monday night. Pittsburgh coach Dan Bylsma, who earned last season’s Jack Adams Award for guiding the Penguins to the playoffs without both Sid and fellow star Evgeni Malkin — and who has done more of the same this season, helping Pittsburgh start with an 11-6-3 record — compared Crosby’s demeanor upon being cleared to play to that of an eager rookie. (I’m pretty certain, by the way, that concussion expert Dr. Michael Collins’ final moments of contemplation before rendering his decision looked a little something like this.)

“The only thing I can really say is that is that I would liken it to the sound you hear in the voice of a player that’s going to go play in their first National Hockey League game,” Bylsma said of Crosby. “He’s excited. He’s anxious. He’s been wanting to play hockey for a long time.”

In a 2010 Olympics preview issue of Sports Illustrated published just weeks before Crosby would score the overtime goal that gave Canada the gold medal over the United States in Vancouver, S.L. Price described Crosby’s most recent birthday, which the Pittsburgh Penguins captain celebrated by spending his allotted day with the 2009 Stanley Cup. He turned 22. He’s just 24 now. That’s been the worst part, really, of the time he’s spent sidelined with a concussion: remembering just how young Sid the Kid is, in a league where if you’re good enough to be lucky and lucky enough to be good, you can play up to and over age 40.

Physically precocious all the way back in preschool, Crosby caused his YMCA lifeguard, according to Price, to exclaim to his mother: “I’ve never seen a 4-year-old with developed pecs before.” He was only 15 when Wayne Gretzky named him the person most likely to break The Great One’s own records. “He’s the best player I’ve seen since Mario,” Gretzky told the Arizona Republic. And it was Mario Lemieux himself who, two days before the NHL Winter Classic, told a room full of reporters that “What [Crosby’s] doing now is much more impressive than what I did years ago.”

What Crosby was doing then, just days before his concussion, was playing arguably the best hockey of his career. In half a season, he had already amassed 32 goals and 34 assists, many of them on a point-scoring streak that spanned 25 straight games. It was all a reminder of Crosby’s latest self project, his ongoing and intentional evolution from playmaker to more potent goal-scorer.

Realizing he was allowed space by defenseman expecting him to pass or go crash the net, Crosby dedicated himself to refining his shot to become a threat from outside as well. He ended up tying Steven Stamkos for 51 goals in the 2009-10 season, the most in the NHL. When he similarly focused on face-offs the year before that, he became one of the league’s top guys on the dot. (In contrast, Crosby’s longtime foil Alex Ovechkin has been accused by critics this season of losing his edge by not evolving as a player, leading to a steady and funny-the-first-time stream of “Sid’s back? Does that mean Ovi’s gonna return as well?” joked on Sunday.)

For all his God-given talent and those “thick hockey haunches,” as Michel Farber has repeatedly called them, the most notable thing about Crosby is how thoroughly hockey is his life. He is, as the coachspeak goes, a top-line player with a fourth-line work ethic. The thought of anyone’s best years being extinguished so prematurely by injury is chilling — and the precedents that have been set by guys like Eric Lindros and Pat LaFontaine are as well — but it’s particularly hard to stomach when it’s a player who has always worked so obsessively to remain one step ahead.

Depending on your level of cynicism, it’s either a testament to Crosby’s draw or to the NHL’s desperation that the instant his return was made public, the hockey world dropped everything it was doing. My Twitter feed was flooded with beat writers and broadcasters discussing the impromptu itineraries — “no direct flights from Winnipeg to Pittsburgh; might have to rent a car in Toronto” — that might get them to Pittsburgh in time.

CBC announced that it would specially air the game. (You know it’s serious when a Canadian network is showing two U.S. teams, particularly when one is the latter-day Islanders.) A few hours later, Versus confirmed that it would be kicking its scheduled Boston-Montreal matchup to the curb in favor of Penguins-Isles, forgoing two of the league’s hottest teams and fiercest rivals for that spectacle of Crosby emerging from the tunnel. The game already has that preemptive crackle of a rival’s return to the arena of a hated or former team, but without the salivating malice: In place of LeBron-in-Cleveland-style boos will be ear-splitting Pittsburgh hometown cheers.

It’s an interesting matchup, in its way. The Penguins and the Islanders have a history of violence: Last season a hockey game broke out during a fight between the two teams that included 346 penalty minutes, 15 fighting majors, 20 game misconducts, and 10 ejections — all in response to an earlier contest that featured a concussion and a goalie-on-goalie fight that literally broke Rick DiPietro’s face.

The two teams have played several times since then without much incident, after being warned by the league that they were being closely watched. Still, the Penguins will be on high alert: When enforcer Steve MacIntyre, who may or may not be in the lineup tonight, arrived in Pittsburgh this offseason, he summed up the team’s protect-Sid ethos: “My job is to make sure [Crosby’s] transition back to hockey goes smoothly.” (You can almost hear the knuckles cracking!) Also watching eagle-eyed will be the vocal and devoted horde of Crosby haters, many of whom feel that he embellishes contact and expects favorable treatment from officials, a reputation that dates back to his days in juniors. But even Crosby haters love hockey, and a good many of them realize that having a healthy Crosby in the league does good things for the sport.

At its most uneventful, the game will draw out a collective exhale: He’s back. But there will be sharp intakes of breath every time Sid touches the puck, and also whenever he’s so much as jostled. Crosby has made it clear that he wouldn’t be returning if he wasn’t ready to face full hockey contact. Bylsma warned that Sid likely won’t see more than 12 minutes or so of ice time, but admitted that knowing him, “we may have to tie him to the bench a little bit.” No one knows whether they’ll witness the sickening sight of Sid on all fours on the ice, or if there will be some new milestone that’s part of a long, rich career. Most likely they won’t see much of anything at all, really, though linemate Pascal Dupuis begs to differ.

“You know, honestly, it’s Sidney Crosby,” he told the Pittsburgh Tribune-Review‘s Rob Rossi. “He has that history of doing big things in big moments. This is a big one for him. Ask me about it after the game, but I don’t think anybody is going to be disappointed.”

Previously from Katie Baker:
Goalies of the Week
Broadway Blueshirts Are Becoming Must-See Theatre
Manning-ology, Lady Byng, and the Pitfalls of Great Free Tickets
The Best Team in the NHL