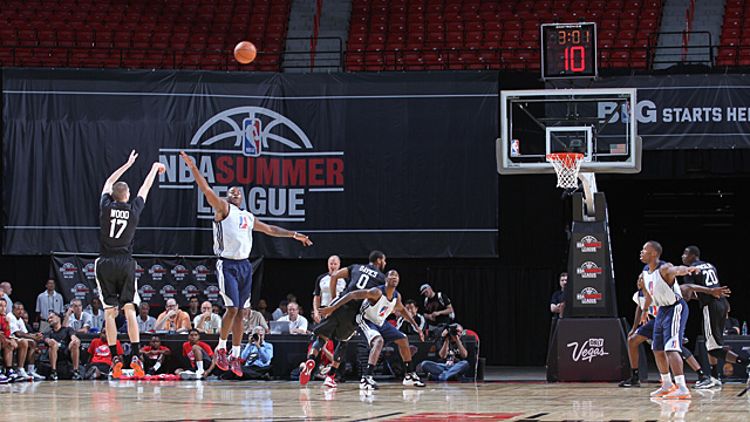 The desert makes you see things. On the flight in, we passed over untold stretching miles of nothing but sand, dust, and scattered brush before suddenly: Las Vegas. Like the Mall of America teleported Watchmen-style into Times Square, Vegas is not so much a place as an ever-evolving event bent on rending the fabric of the everyday. It promises you not so much that elusive American second act, but a dream sequence. It’s built around a seductive and simple premise: What if changing who you are were as simple as deciding you were someone different?

As far as it relates to a fan’s understanding of the NBA, the Las Vegas Summer League is no less a mirage than Vegas itself. Any thought that the teams assembled here have some concrete correlation to what their NBA franchises will look or feel like in the regular season can be handily banished by looking down the list of past Summer League MVPs and standouts: Anthony Randolph, Adam Morrison, Byron Mullens, Randy Foye, Nikoloz Tskitishvili.

This illusoriness comes from our desires. When we want water badly, we see an oasis. A month out from the end of the NBA season, we want to see what’s coming next. We’re starved for what we’ve become reliant on, so we see an oasis. But if an oasis is non-corporeal, something shimmering without mass, there are no shortage of very real, very visceral things happening on the courts of Thomas & Mack Center and Cox Pavilion.

Take the Bobcats’ Jeff Taylor’s thunderous dunk over the Spurs’ Aron Baynes in the final game of the first day’s slate:

I was sitting right on the baseline, almost underneath Taylor. And good lord that dunk was loud. Earlier, I had been very nearly killed by Baynes as he tumbled toward the table — 6-foot-10, 260 pounds of Australian man never looked more destructive than at that moment. These things were not illusions. Like Vegas’s giant LCD billboards, its endless, bottomless electronic soundtrack, its immaculate, often eerily empty yet lavish hotel lobbies, they exist.

The illusion is in what they mean. We’re so used to predicting what’s going to happen in a game based on what’s happened before, so eager to slice, dice, and categorize what actually transpires in order to better leverage it against future games. It often seems like we spend almost all our time trying to make predictions, and whatever energy is left over is spent talking about what it all means. We have a hard time with things as they are, in isolation. And yet Vegas promises you this precise kind of island, with water, water everywhere and plenty to drink.

It’s not, though, the same for most of the players here, the ones without any kind of guaranteed deal with an NBA team. These are guys who have worked their entire lives to be one of the 450 players in the top basketball league in the world. Guys who spent their whole lives being one of the best basketball players in any situation they ever found themselves in. And now it’s just the grind. They’re simply looking for their shot.

The ones hoping for that shot are almost universally flawed in one way or another: undersized or stuck between positions; not good enough at one specific thing to be useful to a team; dogged by problems we can’t even see, the kind of stuff many of us carry around. Sometimes you can see it clearly. Othyus Jeffers is terrifically aggressive getting it inside for a guard, but at 6-5 he’s not big enough to be a true small forward, nor quite quick enough to be a steady shooting guard. Other times it vanishes in a flash of white heat, as when Stefhon Hannah — undersized for the NBA at 6-1 — lit it up for the D-League Select Team to the tune of 23 points against the Timberwolves’ squad.

But they can’t just decide they’re someone different like other visitors to Vegas. They can’t splurge on a limo ride, sit at the high-limit table, and burn their mad money. Vegas wants to tell you it’s easy, wants to make you believe your everyday life is the illusion, or at least to make you forget it. But for these players — who are among the top one or two percent of basketball players in the world — it’s their big chance. Not to become something they’re not, but to see their years of work turn them into what they’ve always been striving toward. And we sit back and talk about how it means nothing.

Illusions of existence and illusions of meaning. Vegas exists, in its glass and brick, its drunkenness and strippers. And the Summer League exists, in its glass-eating and bricked shots, its dunks and stripped balls. You can’t rub your eyes or move closer until they disappear like the glassiness of the highway out at the edge of the horizon. But what it all means depends a lot more on where you stand, on how close you are to it.

The Bizarre Brilliance of Andrew Bynum's Time in Philadelphia