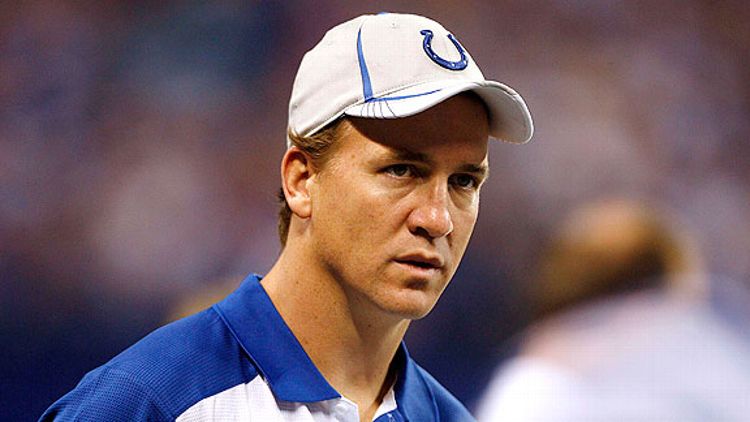 When we wrote about the Suck for Luck campaign before Halloween, we suspected that the Miami Dolphins would end up with Andrew Luck, either by producing the worst record in football or via trade. Since then, though, the Dolphins have gone 4-3, pushing them away from the Luck sweepstakes. The Colts had a 33.2 percent chance of getting the first overall pick when we wrote our initial piece, but heading into Week 15, Football Outsiders estimates their chances of holding the first overall pick at 91.1 percent. If the Colts want Andrew Luck, they’re going to get him.

So then, let’s assume that the Colts will want to draft the best quarterback prospect of his generation and avoid blocking him with the best quarterback from the last one. We can also be pretty sure that Peyton Manning will have input into where he goes next. Why? The Colts owe Peyton Manning a $28 million option bonus that comes due before the 2012 league year, and if they were to pay him the bonus and then trade him, Manning’s cap hold would be an untenable $38.8 million. If the Colts want to receive some sort of return for Manning, they will need to restructure his contract to avoid paying that bonus, and as part of those negotiations Manning will undoubtedly get some say over where he can be traded. If not, the Colts would have to cut Manning, and Peyton would get to play wherever he chooses. Either way, Peyton Manning is not going to end up somewhere he isn’t willing to play.

With that in mind, we can begin handicapping the Peyton Manning trade market. Someone is going to end up with the best quarterback in NFL history, and we can narrow that destination down to one of eight teams that are likely in the running. Let’s start by eliminating the 23 teams that aren’t going to be involved in a Manning trade this offseason, Guess Who style.

It’s almost impossible to envision any of these 10 teams both giving up on their current starting quarterback and then outlaying a serious amount of draft picks and cash to acquire Manning. Carson Palmer may not be a franchise quarterback, but the Raiders just gave up a first- and second-round pick to treat him like one. The Falcons might like Peyton more than Matt Ryan, but after dealing their 2012 first-round pick to Cleveland in the Julio Jones trade, it’s hard to see how they could cobble together a package the Colts would accept.

“Does your team already have Tim Tebow?”
Eliminates: Broncos

Should speak for itself.

“Does your team play in the AFC South?”
Eliminates: Jaguars, Texans, Titans

The Colts would never deal Manning to a team in the AFC South. Their nightmare scenario in the case that they release Manning has to be that Peyton returns to Tennessee and revitalizes the Titans. They might be willing to trade him to a team within their conference, but you have to figure that Indianapolis would prefer Manning ends up in the NFC.

“Does your team already have a quarterback of the future whom Manning would block and whom you are committed to testing over the next two years?”
Eliminates: Buccaneers, Bengals, Lions, Panthers, Rams, Vikings

Josh Freeman and Sam Bradford have been awful in 2011, but their effective 2010 seasons should get them at least one more season as their team’s starters in 2012. The jury is still out on Matthew Stafford. Rookies Cam Newton and Andy Dalton have been effective during their debut seasons, while Christian Ponder has shown signs of promise in Minnesota.

The Browns could actually make the best offer for Manning of any team that needs a quarterback, since they could send the Colts two 2012 first-rounders (including their own pick, likely to fall in the top 10) and throw in Colt McCoy to serve as a backup for Luck. But can you imagine Peyton Manning showing up for Week 1 of the 2012 season in a Cleveland Browns jersey? Of course not.

That leaves us with eight possible destinations for Manning. In ascending order of desirability for Peyton:

If you squint long enough, you can make sense of this one. The Chiefs have plenty of young talent on defense, and with no head coach in Kansas City at the moment, Manning could basically pick a head coach and offensive coordinator to bring with him. Kansas City also has one of the best medical staffs in football, so it might help keep Peyton healthy going forward. The problem is that the offense really isn’t very good. The offensive line is shaky at pass-blocking, Jamaal Charles has a torn ACL, Dwayne Bowe is about to become an unrestricted free agent, and Jonathan Baldwin and Dexter McCluster are still lottery tickets.

The Redskins certainly need a quarterback worse than any team on this list; if you really need us to quote the numbers on Rex Grossman and John Beck, well, they’ve completed less than 59 percent of their passes and have thrown more interceptions (20) than touchdowns (14). It feels like Manning would somehow have a greater legacy if he turned around things in D.C. as opposed to some of the other destinations on this list, but Washington’s wideouts are ancient and its star left tackle, Trent Williams, tested positive for marijuana 10 different times in September and October. You get the feeling that the Redskins would want Manning a lot more than he would want the Redskins.

The Seachickens spent their 2010 and 2011 first-round picks on offensive tackles (Russell Okung and James Carpenter, respectively), so they should be able to keep Manning upright over the next few years. Free-agent signings Sidney Rice and Zach Miller have been busts at receiver this year, but they would look a lot better with Manning at quarterback than Tarvaris Jackson and Charlie Whitehurst. Would the Seahawks make a huge outlay for Manning, though, when they could put together a smaller package and trade up to draft USC quarterback Matt Barkley?

Again, Manning would get the benefit of a clean slate here, as the absence of a head coach allows him to help select someone who will stay out of his way and structure an offense that Peyton will want to play in. And like Kansas City, Manning would be playing on the opposite end of a talented young defense, but the playmakers here (notably Brandon Marshall and Davone Bess) aren’t about to leave. Would Manning really want to go play somewhere, though, where his team clearly looks to be a distant no. 3 in its division? At least he has experience playing the Patriots every year.

Now, we get into situations in which Manning would be the final piece of a championship puzzle. We’ve all seen the Joe Flacco experience for four seasons now; it’s not working. Flacco’s an average starting quarterback by just about every definition of the word. Check out his Advanced Passing stats at pro-football-reference.com; he’s right around the 100 league average for his career in every statistic besides interception rate. We know how great the Ravens’ defense is, and they already have an offense with players who would fit Manning perfectly; Ray Rice, Anquan Boldin, Torrey Smith, and Dennis Pitta are pretty good style matches for Joseph Addai, Reggie Wayne, Pierre Garcon, and Dallas Clark. (Obviously, Rice is better than Addai and Wayne is better than Boldin, but you get the idea.) The only problem is the Ravens are always going to be up against the salary cap because of the amount of money they spend on their defense, and they already need to sign Rice to a long-term extension. They probably would not be able to afford Manning, even if he’s a great fit.

Everything from the previous paragraph applies here, but the Jets need Peyton more than the Ravens do, and general manager Mike Tannenbaum is a wizard at carving out cap space for a big signing. The most fun thing about this possibility would be that moment after the trade when the Jets fans who have been behind Mark Sanchez for three years instantly turn on him. Did you know that Sanchez is taking home $14.75 million this year?

Oh, like you weren’t thinking about it already, Cowboys fans. If the Cowboys fail to go deep into the playoffs this year, there will certainly be talk about replacing Tony Romo, right or wrong. The Dallas offense is pretty great as is, but imagine if Peyton Manning got to work in that same offense. Do you think Peyton Manning misses that throw to Miles Austin that would have finished off the Giants on Sunday night? Manning would get Austin, Dez Bryant, a Hall of Fame tight end, a pass-catching running back, and a pure runner to go with two young, talented tackles. That would be the best offense in football, Packers be damned. The only problem is contractual; the Cowboys would have been able to deal Romo very easily under the terms of his old deal, but they renegotiated his deal in September to turn his base salary into a signing bonus spread over multiple cap years. In addition, if he’s traded before 2013, his contract is automatically extended to 2016. So while the Cowboys might be able and willing to acquire Manning, they might struggle to get rid of Romo.

If Jim Harbaugh can’t get Andrew Luck, wouldn’t this be the next best thing? With Harbaugh as coach, that young offensive line percolating, a dominant defense, and the NFC West on the docket for six games a year, the Niners can own this division for the next three to four years. That’s pretty clear. But when they lose in the playoffs this year, the narrative around them is going to become simple: “We need an upgrade on Alex Smith if we’re ever going to win a Super Bowl.” The Niners left $16 million in cap space unused this year, and with a young roster, they should be able to fit Manning under the cap in 2012. And while the San Francisco offense isn’t quite as good as the unit Manning would join in Dallas, Peyton would have enough weapons to justify making the move. We’ve seen how good the 49ers can be with a below-average quarterback this season; now, what could they do with an elite one?

The Randomness of the NBA’s 66-Game Season
The Fabulous and The Flops of NFL Week 14
Chiefs and Dolphins Fire Coaches, Ignore Real Problems