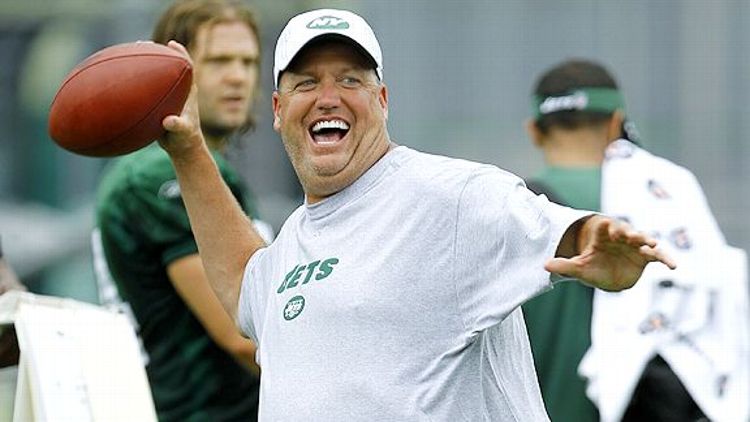 If you’ve ever sat through a press conference with Bill Belichick or Andy Reid doing their “these are not the droids you’re looking for” riff, or watched Kansas City Chiefs coach Todd Haley call a game like a guy who had been lost for two days and refused to ask for directions, you’d be forgiven for thinking NFL coaches are a pretty stubborn bunch.

For all his bluster and confidence, though, New York Jets coach Rex Ryan seems to have a more open approach.

Maybe he participated in an offseason wish-burning ceremony or something, but it seems like Ryan has been saying yes to everything lately. There was the plea to the rest of the league to step up and beat the Patriots, and now news that the Jets have turned themselves into something of a coaching think tank.

If you’ve ever seen Manning sitting on the bench while the Colts defense is on the field, staring at printouts of game film with a facial expression a shade less intense than a Scanner, you have Moore to thank for that. It was under his tutelage that Manning became one of the finest quarterbacks in NFL history.

The 72-year-old Moore helped mold the Colts offense into one of the most lethal attacks in the league, and he’s now lending some of his experience to the Jets. The chief beneficiary of Moore’s teachings, so far, is not quarterback Mark Sanchez but rather tight end Dustin Keller … at least according to Keller. The Jets should be counting on it; they’ll need Keller to step up to compensate for the loss of Braylon Edwards.

Keller isn’t the only one looking to learn from Moore, of course. “We’re going to bring in guys, even position coach guys, that might be out there that if we can get an idea or two ideas from someone then it’s worth it,” Ryan said. “We’re about improving as coaches, so we’re excited about that. That’s going to give us a chance to get better.”

And who knows, maybe Moore can take away something from this experience with Rex & Co., too. Or … you know … on second thought, maybe he’s good.