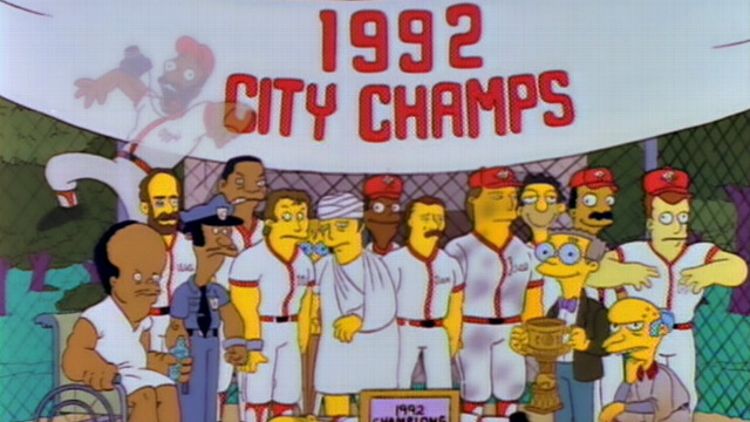 The baseball analytics revolution has helped us answer many questions that might have seemed unknowable before. We can now measure not only a pitcher’s velocity but also the exact horizontal and vertical break on his pitches, the precise coordinates of his arm slot, and dozens of other variables. We can calculate the worth of catchers who excel at framing pitches. We can even take the sum of a player’s contributions and find a reasonable estimate of his overall value.

Lovely pursuits, all. But mere trivialities next to the most pressing baseball question the world has ever had to face: If Mr. Burns had to re-staff the Springfield Nuclear Power Plant softball team with a lineup full of present-day players, who should he choose?

To answer the question, we spent hours considering a wide array of variables. Like the original Springfield Nine, this new team needed to have plenty of star power. It would take a carefully crafted blend of youth and experience, one that would foster a harmonious clubhouse. On the strategy front, you’d want power with a touch of speed, hitters and ace defenders, World Series experience, and a few players hungry to win it all for the first time. Finally, we wanted a group of players who’d blend well into the Simpsons universe, meshing their own personalities and backstories with those of the show’s characters. Our new lineup needed to suffer misfortunes that stack up to Ken Griffey Jr.’s gigantism, while also matching up with their own personality quirks.

Here then is the new Springfield Nine, and the calamities that would conspire to get Lenny, Carl, and the rest back on the field for Homer’s climactic plunking in this 2.0 version of events.

Flush with cash after signing a seven-year, $175 million contract but fearing a correction in the high-flying stock market, Hernandez meets with German investors Hans and Fritz. Intrigued by the Germans’ plans to buy the Cleveland Browns, Hernandez signs over his entire 2013 salary, only to discover that Hans and Fritz are secretly bankrolling an Uterbraten plant in Dusseldorf. Racked by guilt and shame, Felix abruptly leaves Springfield, returns to the big leagues, and fires 12 more perfect games.

Trying to find his way back to the Show after all 30 teams failed to sign him this offseason, Valverde goes shopping for new eyewear. Finding a pair of specs in the discount bin at the Try-N-Save, Valverde drops $9.99 in hopes of improving his vision, ratcheting up his command, and attracting an interested buyer. Back on the mound, he runs into even more trouble finding the plate before realizing the terrible truth: The goggles do nothing.

Shopping for a mode of transportation while in town for the big game, Posey decides to splurge for a new car. Unable to find any respectable dealers in town, Posey stumbles onto Crazy Vaclav’s. He finds a sub-sub-sub compact he likes, pays cash, and drives off the lot. But despite following Vaclav’s instructions that he put it in “H,” the car stalls, leaving Posey stranded miles from the stadium with the game about to start.

In search of volunteer work in the community, Molina finds a gig volunteering at the Springfield Retirement Castle. Finding someone willing to talk to him for the first time since wearing an onion on one’s belt was in style, Grampa begins bombarding Molina with long, pointless stories until both men fall asleep. When Molina finally wakes up, the game is over, and Grampa’s firing epithets at the St. Louis catcher, since it will be a cold day in hell before he recognizes Missour-ah.

The Tigers slugger flies in for the game, only to realize he has nowhere to stay. Disco Stu graciously agrees to put Prince up for as long as he needs. It’s an offer born of generosity but also a smattering of self-interest: Fielder could make an excellent wingman, and, with the proper guidance, could become an ambassador for Stu’s master plan to usher in a new golden age of disco. Fielder’s skeptical at first, telling Stu he should probably take it easy with the game coming up. But Stu wears Prince down, persuading him to come out and see Springfield’s best (and only) disco act, Earth, Wind & Tire Fire. The night goes smoothly until Fielder, donning a three-sizes-too-small leisure suit that Stu lent him, develops a severe allergic reaction to the polyester, costing the team its starting first baseman.

The brilliant Votto joins Springfield’s Mensa group. Caught up in the fast-paced, glamorous nerd world fostered by Professor Frink, Comic Book Guy, and company, Votto falls into a wormhole of quantum physics and Confucianism, abandoning baseball to begin a search for the meaning of life that remains unsolved to this day.

Hoping to leverage his bubbly personality and big Twitter presence into a media career, Phillips begins shadowing newscaster Kent Brockman. Summoned to cover a 50th-anniversary celebration for Lard Lad Donuts, Brockman invites Phillips along to learn the intricacies of doing a remote broadcast. Tragedy strikes as the giant metal donut, never fully refastened after Lard Lad’s murderous Halloween rampage, plummets to the ground, crushing four bystanders. Brockman and Phillips narrowly escape a direct hit, but Phillips breaks his ankle diving out of the way of the glazed nightmare.

Seeking to acquire a handheld laser gun to spruce up his self-proclaimed Laser Show, Pedroia seeks the help of Rigel 7’s orneriest brother-sister pair, Kang and Kodos. The decision backfires when Springfield’s oppressed residents revolt against the tyrannical duo, leaving Pedroia caught in the crossfire. Pedroia gets his leg impaled by a bigger board with a bigger nail but avoids serious injury, requiring only a tetanus shot to cure his wound. Unfortunately, Homer had just received Dr. Hibbert’s last available tetanus shot a day earlier, forcing Pedroia to turn to Dr. Nick for help. It does not go well.

Shunned by New York’s bachelorette population after handing out one too many gift baskets, Jeter loses his confidence with the fairer sex and retreats to Springfield a broken man. There he finds a kindred spirit in Moe, the only man on Earth lonelier than the heartbroken Captain. Moe teaches Jeter how to cope with being alone, telling tales of Birthday Fries offers gone awry and the Flaming Moe’s fortune that vanished overnight. The two leave Springfield to start a holistic living clinic in North Haverbrook and are never heard from again.

Rollins joins the Springfield Police Department as a volunteer deputy. After he earns the trust of his fellow officers, Lou and Eddie invite him to participate in their weekly squirrel-wagering game. Untrained at the art of stuffing squirrels down his pants for the purposes of gambling, Rollins is bitten by one of the squirrels, which turns out to be rabid. Although Mr. Burns is initially impressed with Rollins appearing so motivated to play that he’s frothing at the mouth, Springfield’s manager quickly realizes this is not actually a good thing.

Beltre’s legendary aversion to having his head touched becomes such a burden on himself and his teammates that he seeks therapy to correct the problem. After years of counseling, he finally overcomes his fear, just as Burns invites Beltre to play for Springfield. On the night before the big game, Beltre meets up with Homer, who invites him to watch Stan “The Boy” Taylor Jr. and the rest of the Springfield Atoms take on their archrivals, the Shelbyville Sharks. In a rare display of generosity, Homer buys a nacho hat and invites Beltre to wear it. But seconds later, unable to control his primal urges, Homer begins frantically pawing at the newly indoctrinated Nacho Man’s head. Just as the cheese begins to dribble through a gaping hole in the top of the hat, Beltre comes unhinged, lunging at Homer and strangling him. Realizing the gravity of the situation, Beltre flees the scene, never to return to Springfield, or have anyone touch his head ever again.

His life and career derailed by injuries and new accusations of PED use, A-Rod decides he must reconcile with the one person who understands him best: Madonna. To do so, he enlists the help of Rabbi Hyman Krustofsky. Under the rabbi’s tutelage, Rodriguez’s knowledge of kabbalah grows until it matches that of the Material Girl’s. A-Rod is last seen on Madonna’s world tour in Zurich, performing as a backup dancer during a spirited rendition of “La Isla Bonita.”

Clean, sober, and born again after years of battling substance abuse, Hamilton happily accepts Burns’s invitation to play for Springfield, earmarking his appearance fee for various charities. Upon arriving in town, Hamilton heads to church to watch Reverend Lovejoy’s sermon. There, he’s approached by Ned Flanders, who warns that baseball is a game rife with sin, complete with steroids, excessive drinking, and Baseball Annies who can cloud even the most devout man’s judgment. Hamilton politely thanks Flanders for his concern, then gets up to leave. As soon as he steps outside, Rod and Todd jump him and throw him in a van emblazoned with the slogan “If this van is a’rockin’, it probably means we’re reading from Deuteronomy.” Hamilton disappears forever.

Seeking a new image for its brand of dishwasher detergent, the joint venture of Matsumura Fishworks and Tamaribuchi Heavy Manufacturing Concern fires Homer and hires Ichiro to be the new face of Mr. Sparkle. Seeking revenge, Homer invites Ichiro out for sushi, then has Akira serve his new friend a plate of compromised fugu. And that’s the end of that chapter.

Reacting to Harper’s famous retort to an overzealous reporter, Krusty sues the Nationals star for copyright infringement, arguing that the phrase “Klown Kwestion” is his own intellectual property. Seeking damages totaling $100 million, Krusty hires the most ruthless lawyer in town. With Lionel Hutz no longer around to work on contingency (RIP), Harper decides to defend himself. The case gets tied up for more than a year, forcing Harper to miss the game.

Aiming to get his trademark dreadlocks camera-ready, McCutchen heads to the local salon for a touch-up. Finding the nearest dryer, he turns it on, only to learn that the dial’s been turned to Maximum Marge setting. Already skeptical of even the slightest deviations from traditional hairstyles and grooming trends, the conservative Burns bristles at McCutchen’s new 7-foot ’fro and kicks him off the team.

Afraid he might follow Jose Reyes’s lead and get traded soon after buying a new home in south Florida, Stanton starts looking for real estate opportunities in Springfield instead. But when he wanders onto the west side of town, Cookie Kwan mistakes him for a competing real estate agent, and violence erupts. Stanton still makes it back to the game in time, starting in right field and hitting nine home runs while his backup, Homer, gathers splinters on the bench. In the ninth inning, with the score tied, the bases loaded, and Stanton due up, Burns calls on Homer to pinch-hit. Though both Stanton and Homer are right-handed hitters, Burns cites Homer’s higher ground-ball rate and Shelbyville’s weak infield defense as the reason for the switch … proving yet again that he’s the greatest strategist the game has ever known.

Thanks to @jonselig for brainstorming these preposterous scenarios with me. We’ll be back with real baseball coverage tomorrow, promise.