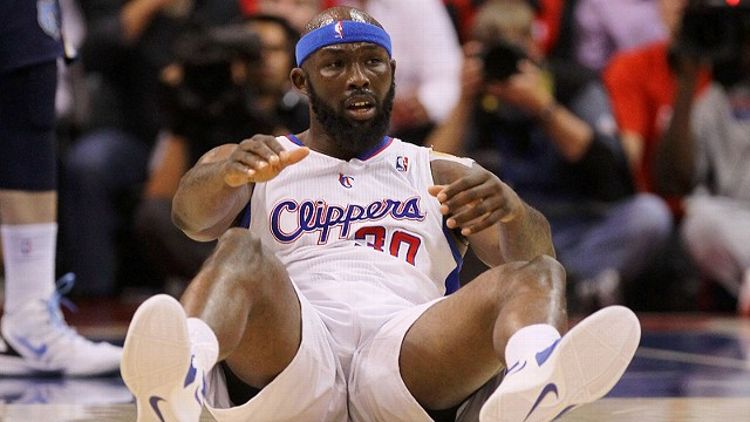 Confession: The screeching debate over flopping, which peaked last week with the NBA announcing new anti-flop penalties, has left me largely unmoved. Some reasons:

1. Flopping, in the broadest sense, is going to be part of every team sport with referees and penalties. Flopping and its subtler cousins are unavoidable even when governing bodies make rules specifically to prohibit them.

2. I remain unconvinced that the NBA has a significant flopping “problem,” and in a way, the NBA’s new anti-flopping regulations confirm that suspicion. Flopping happens, obviously. But there is only one category of flop that is truly problematic, in terms of having an impact on the scoring margin of a game: The totally fabricated contact that fools an official into calling a foul that doesn’t exist in any way.

3. I’ve no scientific evidence for this, because none exists, but I’d bet very good money this flop type constitutes a tiny minority of all floppish behavior. Why?

And the illegal screen has spawned another piece of trickery: the tendency among defensive players, particularly big men defending the pick-and-roll, to blatantly shove would-be screen-setters just as those screen-setters are getting into position to set a pick for their guards. Watch for this. Kendrick Perkins, Paul Millsap, and Evans are all really good at it, though lots of other big men try it now and then. The goal is to get the screen-setter off-balance or move the pick farther toward mid-court, allowing the man defending the point guard to avoid the screen without any trouble. A really good shove, if somehow undetected by referees typically staring at the play, can result in a near collision between point guard and big man, mucking up an entire possession.

People don’t scream about this kind of stuff because it’s subtle, and because most NBA players — those damnable floppers! — simply fight through this run-of-the-mill physical play as best they can. But if the NBA wants to clean up the look of the game in a meaningful way, wiping this kind of stuff out would do more to improve the flow than fining the league’s best/worst actors. The league is making noise again about a crackdown on illegal screens. Let’s hope they stick to it.

Back to flopping: The same “highlighting actual fouls” thing is true of all those drives in which an offensive player gets into the lane, draws contact, and flails his arms — an example of which (featuring Tony Parker) is included in the NBA’s video package. Lots of that ridiculous flapping serves to highlight real fouls, and thus doesn’t harm either team or change how referees “should” officiate a given play.

And as others (including the great Shane Battier) have argued, the NBA has enabled floppers by officiating the block/charge rule in a way that encourages defensive players to slide in and fall down. Players who have no chance to otherwise interfere with a shot understand they can slither into the lane at the right time and simply get in the way of an offensive player as that scorer begins his move. A sport based upon crowd-pleasing athleticism should have an interest in giving offensive players more of the benefit of the doubt on block/charge calls or encouraging defenders to rise for a shot challenge, but even so: Fans often sound off against a charge call without actually knowing the rules, in part because some (not all) broadcasters until recent years have repeated misinformation about the block/charge rule as written. Standing perfectly still isn’t actually a requirement for drawing a charge. Nor is being outside the block/charge circle during specific play types, as LeBron James found out during the 2011 Finals in Dallas.

The block/charge rule is changing again this season, by the way. Officials will be able to review any block or charge call within the last two minutes of regulation and overtime to see if the defender was inside or outside the block/charge circle. But here’s the catch: That’s all they’ll get to review, and the location of that defender’s feet on replay will be the sole determining factor in the final call, says Stu Jackson, the league’s executive vice-president for basketball operations. For instance: If the officials whistle Battier for a blocking foul on Paul Pierce but replays show Battier’s feet were actually outside the block/charge circle, the officials will automatically have to overturn the original blocking call, no matter what else the replay shows, according to Jackson. It won’t matter if replays also show Battier moving his body in a way that violates the block/charge rule. If his feet are outside the circle, the play becomes a charge, Jackson says.

“They are going to the replay for only one reason,” Jackson says. “We don’t review earlier judgment calls. If the replay shows him sliding and all of that, it’s irrelevant.”

This is similar to how the league introduced review for out-of-bounds calls in the last two minutes of regulation. It came to a head in Game 3 of the 2010 Finals, when officials reviewed an out-of-bounds call and concluded, correctly, that Lamar Odom of the Lakers was the last player to touch the ball. But replays also revealed Rajon Rondo knocking Odom’s arm, a clear foul that prevented Odom from grabbing the ball cleanly. Officials weren’t allowed to review anything but “who touched the ball last?” and so the ball went to the Celtics. The Lakers complained, but the general complaint on this particular issue faded. The volume might be louder on a crucial block/charge overturn, considering the murky nature of the underlying call.

But these aren’t the sorts of flops the NBA is targeting, and to the league’s credit, it is being transparent about the goal of the new flopping legislation. The league is mostly interested in removing the most blatant flops, successful or unsuccessful, that result in endless embarrassing replays and blooper reels. “It’s the image of the game,” Jackson says. “It’s the image that officials are being fooled by calls, and more important, that fans are fooled into thinking officials are being fooled by players.”

The video tutorial couldn’t be clearer about this. The second half includes several examples of semi-flops the league will not penalize. In one, Randy Foye guards Rudy Gay in the post and falls to the floor after taking a back-it-down bump in the chest from Gay. In another, Caron Butler flails an arm in the air after a Memphis player tries to strip the ball from him. The narrator of the video — an official NBA video — concedes that both Foye and Butler engage in some “slight embellishment,” but not enough to warrant a fine or suspension. Players are “taught to fall down” in some circumstances, Jackson says, and the league feels queasy about punishing taught behavior.

On the surface, this has troublesome potential. Some embellishment is OK but too much is a violation? Where is the line? Remember: There is money at stake here, big money to minimum-salaried guys, which is why the players’ union is already challenging the rule. The league has put itself in the position of judging things that are tough to judge, even on replay — the impact of physical contact, the direction of that impact, etc. It’s certainly possible the league will punish a player for an act less floppy than any number of others that draw no such punishment.

But the league also has an obvious middle ground here, one it has telegraphed: Punish the most obviously theatrical flops — the Reggie Evans and James Harden types above — and leave the rest alone, and hope the fines deter the embarrassing stuff.

An in-game punishment would be ideal, especially in the rare case in which a blatant flop tricks the referee. It wouldn’t take long for a video-review official to make the call, and the victimized team would shoot a technical after a timeout, minimizing the interruption. That sort of system might come at some point, but the league has gotten off to an understandably cautious start with a setup that should work decently — so long as the league doesn’t overreach.