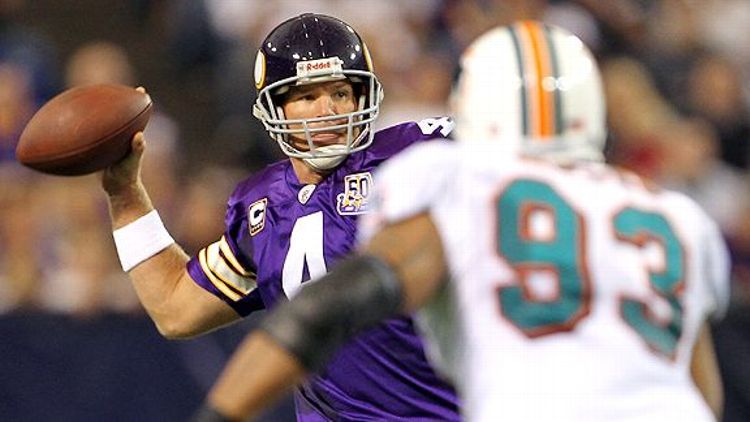 I feel like it is Christmas in July (except it’s August). Right when the NFL headline factory seemed to be simmering down to don’t-bother-stopping-the-presses stories like “the 49ers email the entire league to try and find a home for Taylor Mays”, Brett Favre rises from the dead, with rumors swirling that he may join the Miami Dolphins. Despite the denials and the non-denial denials, here are some thoughts on the possible return of the gunslinger.

Favre’s Blaze of Glory
This whole ordeal has officially entered Baxter/wheel of cheese territory and I’m not even mad … it’s amazing. This guy is ONE THOUSAND YEARS OLD, do you know what’s older than one thousand years old? The pyramids, that’s it! Nothing else! A couple of reasons why I hope this actually happens.

1. Flash-forward to a random Autumn Friday night/Saturday morning where I’m absent-mindedly looking at Twitter at 1 a.m. only to see a Lockerz pic from Fabolous (@MYFABOLOUSLIFE) at Liv, with the caption, “SMH @ Favre drinking Ciroc and yelling out words to ‘I’m On One.’” Operating under the relatively safe assumption that Rick Ross (@rickyrozay) would be in the background (or foreground!) of this picture, I think I can safely say that nothing short of world peace and the end of global hunger would make me happier.

2. I kind of really want to see how all of this ends. Brett Favre is clearly not content to just ride off into the sunset. So let’s see what his idea of a blaze of glory style exit looks like. Here’s one scenario: Favre makes it all the way to November. Maybe the Fins look good, maybe they look like they have a 41-year-old QB. So it’s Nov. 6, and the Dolphins are at Arrowhead playing against the Chiefs, Favre rolls outside of the pocket and Eric Berry puts one of these on him—the kind of hit that Knowshon Moreno still has PTSD flashbacks about—and Brett Favre bursts into a cloud of dust and Cris Collinsworth blurts out, “Look at that cloud of dust! Like a kid out there!*” That’s good television.

*Not not unlike Pig-Pen.

Steve Ross Is Not Afraid Of The Spotlight
This positively reeeeeeeks of Dolphins owner Steve Ross. Did you see what Dolphins head coach Tony Sparano said about this yesterday? You should read Sarah Larimer’s post about it. It’s very comprehensive. Tony Sparano is just not built for this. Brad Childress thought he was (he wasn’t). And Tony definitely is not. He did not get into this business to deploy half-truths, to have back and forth text convos with Bus Cook, or to become a supporting character in Favre’s insane comic-tragedy. He, like Dolphins GM Jeff Ireland, is a Parcells guy. Sparano’s idea of a good time is waking up before he even goes to sleep to watch film of left tackles shuttling around a tractor tire.

Ross, on the other hand, wakes up every day on a waterbed, filled with water from a Swiss creek that’s never been seen by anyone but the guy who fills Steve Ross’ waterbed, and starts singing to himself, “I Love A Parade.” That’s why Gloria Estefan and Marc Anthony are part of his ownership group. And that’s why the Fins were just linked with Terrelle Pryor. This guy likes to see his team make a splash. If this Favre thing is even halfway true, they’re about to pull a big old cannonball.

Wrangler Premium Five-Star Jeans
Shout out to Miami. I can only tip my cap to a town that’s doubling down on its rep as a weigh station for megalomaniacs. May Favre, Wade and Lebron have totally tender moonlit walks, wearing Wrangler jeans (naturally), on the beaches of Star Island for the rest of my days.

Previously from Chris Ryan:
The Peyton Whisperer
Carolina Panthers Fix Themselves
Jay Cutler is on the Rebound
Trash Talk: The Ryan Family Business