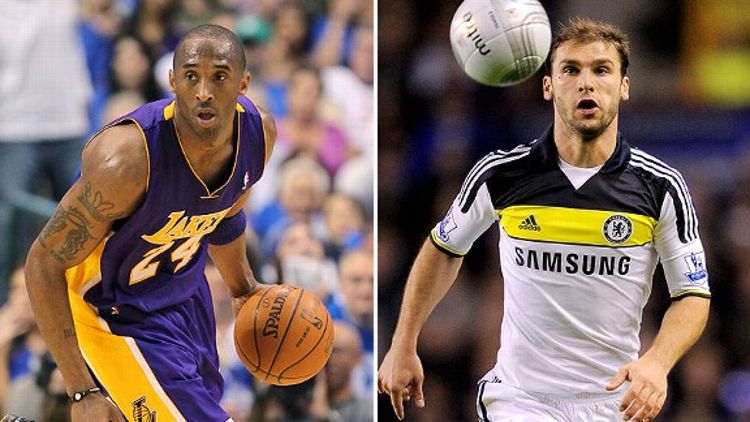 To complete our community service (and get off probation), we proudly present the second half of our Men in Blazers’ NBA-to- Global Football Team Support Translator. It’s our charitable attempt to ease the withdrawal pains of our basketball-loving brothers and sisters who have been so cruelly forced to go cold turkey.

Please note: This guide is objective and scientific. It’s the result of crunching data through our CDC 6600 supercomputer, which processed a series of complex variables through a proprietary MiB algorithm, punching out the below results on ticker tape.

(You can find Part I of the translator here.)

Big-name stars are overrated. With few apparent strengths and little in the way of depth, your Nuggets employed hustle and teamwork to defy expectations and reach the playoffs. You are NORWICH CITY, a club situated in a verdant locale as scenic as Denver. The team’s thick-boned, talismanic striker could be named after a legendary Nuggets guard. From this day on, Grant Holt shall be known as “The Fat Lever.”

NEXT STEP: Prepare to be abused by your new team’s majority shareholder, oft-drunk cooking personality Delia “Let’s be Avin’ You” Smith.

You live in a turgid town. Your team is uncharismatic and grubby. Let’s keep this simple. You are a WOLVERHAMPTON WANDERERS fan. Your new interest has a similar name and relationship to glory as your beloved NBA franchise, and here’s the clincher: The words you bark on point of orgasm can remain the same: “COME ON, YOU WOLVES.” Don’t go changing. Your partner will never know the difference.

NEXT STEP: The high production value of this golden reggae nugget will tell you all you need to know about your new club.

You have a nasty case of Blazermania — a love so blind it compels you to bellow for your team, whatever the result. As one of the most rabid fan bases in pro sports, you are born to be a NEWCASTLE UNITED fan. Few teams mean more to their fans, despite giving them so little in return. In the same vein as Portland’s “Jail Blazers,” the law has often presented more of a challenge for Newcastle than opposing teams. But an injection of talent has transformed results, and Geordie fans, fueled by multiple pints of Newcastle Brown Ale, are living proof that few acts are more joyous than cheering for your local team.

NEXT STEP: Learn to decode the splendor of Newcastle-based Jersey Shore equivalent, Geordie Shore, without the aid of subtitles.

Your franchise has demonstrated a distinct mastery: a cruel expertise in fan base destruction. The landmark law case, City of Seattle v. Professional Basketball Club LLC, caused the franchise to leave its trophies and banners behind when it fled the Emerald City. You are now a fan of MK DONS, English soccer’s pariah team that plies its trade in Double-A equivalent League One.

The Dons decamped from Wimbledon in 2004, suffering the indignity of a negotiated peace with former fans who demanded and received the club’s trademarks and trophies. Although the teams have been stripped of their past, they both have assets in the present. Just as Kevin Durant is one of the most coveted young stars in the NBA, the Dons have Seyi Ojo, a 14-year-old midfielder rumored to be on the brink of a big-money move to Chelsea or Liverpool. Smoke ‘em while you got ‘em.

NEXT STEP: Meet the MK Dons infamous superfan, “Wolfman” — a homeless man who has a season ticket purchased on his behalf by a fan collective.

Your franchise is a tad dog-eared: Your legendary coach bolted after 23 years at the helm, soon to be followed by the team’s franchise player. An inexperienced, foreign-flavored roster has been left behind, including a Russian best known for his propensity to sob. You are a highly evolved specimen, perfectly poised to become an ARSENAL fan. Not now, BUT IN 12 MONTHS’ TIME, when both coach Arsene Wenger and star striker Robin van Persie have left for pastures new, and the Gunners are Andrey Arshavin’s team.

NEXT STEP: Find a way to kill the next 12 months. May we humbly suggest taking a course on Buck Hunting or learning to “Love Yourself?”

You experience pleasure by cheering for a perpetually flaccid team whose landmark achievement is simply staying in business. You are FULHAM — an unremarkable team that depends on its owner’s peculiar taste in sculpture to gain media attention and buzz. Golden State might have Mark Jackson, but Fulham will always have Michael.

NEXT STEP: Join with other Oakland citizens and express your giddy Fulham love at this City Hall fan rally.

For the longest time, you were “Manchester City in the 1990s.” A wretched team doomed to toil and suffer while your crosstown rival cloaked itself in riches and glory. But then City found a way to end its torment courtesy of an extreme makeover by a UAE sheik. So you must be a LEYTON ORIENT fanatic — a London team with a heart of gold that, crudely speaking, is the capital’s crappiest club. Your new obsession currently flounders in Double-A equivalent League One, but at least you have that budding rivalry with all those Oklahoma City Thunder/MK Dons fans to look forward to.

NEXT STEP: Travel to the battlefields of the World War I with other Leyton Orient fans and lay wreaths on the graves of O’s players who died in combat.

Simply put: We have had too many e-mails from Lakers fans begging “not to be Chelsea” to not make you CHELSEA. Lakers Nation, you doth protest too much: Your winning tradition has been soiled by an arrogance which, real or imagined, has caused you to be roundly despised across the league. You have a young coach attempting to gain the respect of a veteran squad, led by a soft Spanish big man and an aging Kobe, who could be any one of Chelsea’s graying superstars — John Terry, Frank Lampard, or Didier Drogba — attempting to substitute experience for pace.

NEXT STEP: Stock up on celery.

You are a shabby team built around a fabled Canadian playmaker whose fearless style has put him on the receiving end of many an opponent’s elbow. Your soccer doppelganger is venerable PRESTON NORTH END, England’s first-ever champions, who are now led by Canadian international Iain Hume, a fiery striker who resumed his career despite having his skull shattered by an errant elbow.

Like the Suns, your glory days were not so long ago. The 1940s to be exact. Back when the legendary Tom Finney strolled around the field. A player once known as “The Preston Plumber” before being knighted “Sir Tom” around the same time as “The Round Mound of Rebound” coined “Sir Charles.” Regrettably, like Barkley, Sir Tom never lifted a trophy.

Your ball club is in stasis. You are BOLTON WANDERERS. This team lacks a Jimmer equivalent, but has something that may prove to be a mite more useful — a lion as a mascot. Slamson of Sacramento, meet Bolton’s Lofty. We will leave you to determine which is more lovable/grating.

NEXT STEP: Persuade Don King to promote a 12-rounder between Slamson and Lofty, which could yield more excitement and action than Bolton’s entire season.

Your team finally snared a championship courtesy of the Teutonic tenacity of “Der Diggler.” This Bavarian son of Würzburg, Lower Franconia has made the Mavericks America’s team. Your soccer analogue requires a similar vaunted status. From this day forth, the apple of your eye shall be FC BAYERN MUNICH — a Bavarian powerhouse and the German Bundesliga’s glamor team known as FC Hollywood. To ease you into your fandom, here’s how you can politely remind your fellow Bayern fans not to mess with Texas: “Legen Sie Sich Nicht Mit Texas An!!”

You adore a weak roster marshaled by a legendary Hall of Famer whose success as a player has not translated during a brief yet undistinguished coaching career. There is no easy way to break this news to you. As of today, you are an AL-WASL FC fan of the mighty United Arab Emirates Premier League. Your coach, “El Pibe de Oro” Diego Maradona, a maestro as a player, is a lunatic on the sideline. At least he took the job for all the right reasons. (In his words, because “there’s a squad to command and good money.”) Bad news: Your new team is based in Dubai, a 17-hour flight from Texas. Good news: It is currently resplendent atop of the table.

NEXT STEP: Whatever you do, never, ever lift up the banner when Coach Maradona wants it down.

You live in an industrial city and cheer for a team that has utilized a banging brand of basketball to experience fleeting success. You are HULL CITY. This gritty team from a town built on fishing and oilseed burst into the Premier League in 2008 only to tumble back into obscurity two years later. A harbinger for the Grizzlies if they fail to hang on to Marc Gasol.

NEXT STEP: Your adopted city is a national category leader, boasting the highest obesity and suicide rates in England, two factors that made it a muse for morose poet Philip Larkin, known as “the Hermit of Hull.” To read him is to instantly feel better about your own life.

You have the misfortune to support a calamity. A team that exists in an excruciating state of financial uncertainty. Dodgy owners. A coach who is young, bald, and unproven. A star named Chris who wants to opt out of his contract. You are BLACKBURN ROVERS, born and bred. A practical joke of a team owned by Indian chicken magnates, Venky’s, whose dominant force, Chris Samba, is as pleased by the direction of the club as Chris Paul.

NEXT STEP: Draw pride from your new club’s unrivaled status as “India’s Team.”

Just like with the Timberwolves, there is a clue in the name. You are Spurs. TOTTENHAM HOTSPUR. Case closed. Swap Scottie for Tony as your dapper, ball-handling Parker, and replace Tim Duncan for Luka Modric as your uncharismatic lynchpin, and this transition should be almost effortless.

NEXT STEP: Get a tattoo. Choose one by scrolling down this extensive gallery of the most heinous designs ever assembled outside of a Russian prison.

NFL Week 8 Over/Unders from the Sharps