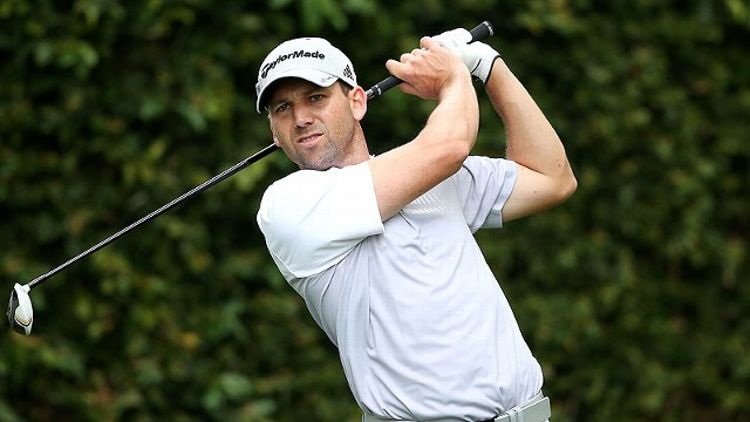 The great thing about the opening Thursday and Friday of the Masters is the existence of pure possibility. When you look at the leaderboard, you can ignore the unpleasant fact that someone named Marc Leishman is in the hunt with Dustin Johnson — one of golf’s most boring humans and the darkness to Ben Crane’s shimmering light — and let your mind run away with fantasies of what could happen over the weekend.

“Holy shit,” you might say, “it’s shaping up for a Sunday duel between Sergio and Freddy Couples!”

And while that may not be the most likely outcome, nobody can prove you wrong. The future spreads out before you, like a beautiful par 5 just waiting to be eagled. Nothing is off the table. So let’s do this. Let’s allow our minds to roam over the wild terrain of potential and find the 10 best possible stories that could maybe almost possibly materialize at Augusta.

1. A Sunday duel between Sergio and Freddy Couples!

2. Seriously, though, Sergio Garcia being in contention at all

A couple of weeks ago, I examined Sergio’s psyche through his recent interaction with a tree and concluded that there’s something inside the man’s brain that predisposes him toward meltdowns and failure. Rick Reilly went a step further last night and examined his attitude toward success. Read the article, because it’s good, but take note of two particular quotes. The first comes from last year’s Masters, after Sergio played himself out of contention:

“I’m not good enough,” he said that day. “I don’t have the thing I need to have. In 13 years [as a pro], I’ve come to the conclusion that I need to play for second or third place. I have no more options. I wasted my options. … Tell me something I can do.”

And then, after tying for the overnight lead yesterday at -6, he was once again bubbling with optimism:

“This is obviously not my favorite place — my most favorite place, that is,” he said afterward. “We try to enjoy it as much as we can. Sometimes it comes out better than others. Today it was one of those good days. Let’s enjoy it while it lasts.”

I mean … shit. The dude just doesn’t believe in himself. His career has been so disappointing, compared to the promise of his youth, that he’s practically a broken man while still being a great golfer. I’m definitely one of those people who hated Sergio a decade ago, and I still hope he loses every Ryder Cup match he ever plays, but I’m on his side in the majors. I want to see him contend, and I want to see him win. And I don’t believe for even a fraction of a millisecond that it’s ever going to happen.

3. Seriously, though, Freddy Couples being in contention at all

Turning back to Mr. Reilly for a moment, he noted in his “Guide to Augusta” piece that there’s a “champions’ club collection” that includes a donated club from every winner in Masters history. With one exception — Freddy Couples, 1992 champion. That’s fascinating to me.

I mean, how do you say no to that? It’s the kind of decision that requires an intense sort of individuality, verging on arrogance. But when you consider how prominent those characteristics are at Augusta, it’s also kind of awesome, like an extremely white-collar version of sticking it to the man. That’s why people call him Freddie Cool. (They also call him Boom-Boom because he hits it a mile.)

After his 1992 Masters win, back problems limited Freddy, and beyond a Players Championship win in ’96, he never really made a splash. If he could somehow stay in contention through the weekend, it would be a joy.

Remember this? (I hope so.)

Forget the fact that he pulled off a hook shot from the pine straw behind the trees under what amounts to the most pressure a golfer can ever experience. Forget that. Wipe it from your brain and just appreciate this: He hit a 52-degree wedge from a distance of 155 yards.

Now, many of you probably don’t golf. I just took it up in earnest last year, and let me tell you — hitting a wedge 155 yards is insane. It’s just insane, and it shouldn’t be allowed. I’m still figuring out how to get maximum distance from my clubs (and I stink), but if I had 155 yards remaining to a hole, I’d probably take a 6-iron or a 5-iron, depending on the wind. Which seems about average. Which means that Bubba Watson is five clubs ahead of me. Which means, if my math is correct, that he is five times the man I’ll ever be.

5. Someone from the England Choke Society making a run

Golf was invented in Scotland, and players from the British Isles have always fared well. That continues today. Three of the last nine major champions have come from Northern Ireland, and you only have to go back to 2007 to find a major champion from Ireland (Padraig Harrington), and 1999 for the last Scottish champion (Paul Lawrie). (Hell, you’ll even find a Welsh champ in Ian Woosnam at the ’91 Masters.)

But the last English major champion? For that, you have to go back almost 20 years, to Nick Faldo at the ’96 Masters. Since then, nothing. And that’s despite some very talented golfers like Lee Westwood, Luke Donald, Justin Rose, Ian Poulter, and Paul Casey patrolling the links. Those first four alone are in the top 13 of the current world rankings, and yet have no majors between them. How is that possible? (Also, they suffer from acute “Monty Disease” — great in the Ryder Cup, terrible in majors. Monty should have been English, dammit.)

Dating back to ’96, we’ve had major winners from America, Australia, Fiji, Canada, Ireland, Scotland, Northern Ireland, South Africa, Argentina, Spain, South Korea, and Germany. But no England. At the moment, David Lynn is at -4, Rose and Westwood are at -2, and Luke Donald is at -1. I don’t get the feeling that the English dry spell will be broken anywhere but at the British Open, but then again, Andy Murray won his major at Flushing Meadows, so maybe Augusta is fair game.

Last year, I celebrated Phil Mickelson’s lunatic golf at Augusta. I hope to do the same this year. I fully expect him to ride a turtle across the water on no. 15 and hit a polo-style shot with his pitching wedge because the ball landed on a lily pad. It’s all in play.

This seems like a good time to mention my favorite totally unfounded golf conspiracy theory that is almost certainly total b.s.:

RUMOR HAS IT that Mickelson was so bad at handling the pressure of a final-round major that he had to take mood enhancers at the 2004 Masters to get over the hump and win his first.

(I swear I’ve heard this before, but I can’t find a link anywhere.)

Aside from Tiger Woods, there seems to be an odd divide between golfers who excel at match play and those who excel at stroke play. And it doesn’t make much sense; why would someone like Ian Poulter thrive under match-play pressure and wilt at the majors? A lot of people offer the explanation that some golfers are better when they have a definite opponent, but isn’t pressure the same, regardless?

Apparently not. The Tour is rife with Modified Monty Disease at the moment — players who are great in match play, but haven’t cracked the majors. I’m talking about guys like Poulter, Kuchar (this year’s Accenture Match Play champ), Hunter Mahan, all the English dudes mentioned above, and Sergio.

Granted, there are exceptions, and Tiger is the obvious example. But the match-play-only set has grown and separated itself over the past few years, and at -4, Matt Kuchar looks like the best bet to break down the barriers at Augusta.

Yes, Tiger. Anyone who doesn’t think he’s still going to break Nicklaus’s record of 18 majors (he’s at 14 right now) is nuts. Please be in contention this week, Tiger. End all the stupid “is he back?” talk. YES, HE’S BACK. HE’S NO. 1 IN THE WORLD RANKINGS. THANKS.

Each of these possible Sunday duels belongs in the large “second-best thing that could possibly happen” group at the 2013 Masters.

This is it. The best thing that could ever happen. Did you miss Guan’s performance yesterday? The Chinese amateur shot a 1-over 73 after qualifying with a win at the Asia-Pacific amateur championship. Pretty OK for the first Masters round of his life, right?

That the last time someone this young played in a major, it was “Young Tom Morris,” and the American Civil War was still raging?

That this is how he finished his round, with the great Ben Crenshaw looking on?

Nobody thought this kid could break 80, much less shoot a 73, and the fact that he did shows major cojones. And while he’ll probably shoot an 85 today, I still have my dream:

(Also, Phil Mickelson on a turtle.)

CourtVision: So This Is What Carmelo Anthony's Prime Looks Like