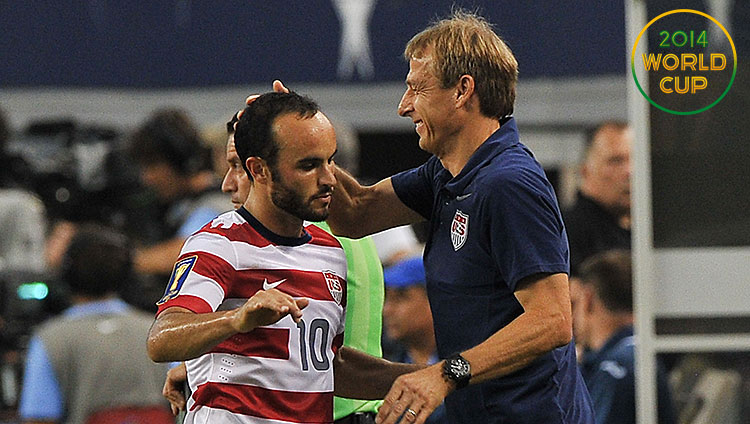 So Landon Donovan is not going to the World Cup. We’ve had a night to reflect. Does it make sense yet?

Klinsmann had always seemed to regard Donovan’s much-publicized sabbatical from the game with barely tolerant bemusement. The player himself may have believed he was back in the fold, after a typically Donovanesque Gold Cup, and his return to the team during late-stage World Cup qualifiers, but Klinsmann always maintained an equivocal cool. It was as if he were mulling over when, and how, to use the entire Donovan episode as a teachable moment.

He chose the eve of the World Cup.

In retrospect, the writing was on the wall when Donovan did not start against Mexico last month. Then there were the subsequent, gentle rebukes that the player and coach seemed to be engaging in about the forward’s training habits. For Klinsmann, Donovan hadn’t demonstrated sharpness before the Mexico game. For Donovan, managing his body between games was now a key priority at this stage of his career, and he could point to showing the sharpness when it mattered.

At the time, it seemed the main consequence of the episode was to finally foreground the possibility of what a USA team might look like with Donovan as an impact player off the bench. That scenario still seemed to include a long international twilight, allowing for a stage-managed departure well after this World Cup.

Instead Klinsmann kicked open the trapdoor and went with the type of adventurous, youthful squad that he has been expected to deliver, ever since he took over all areas of U.S. Soccer technical development in 2011.

It’s the type of squad that had German critics frothing with indignation when Klinsmann unveiled his 2006 team. It is youthful, to the point of being speculative (Julian Green and DeAndre Yedlin are the obvious examples, but that still presumptive first-choice center back pairing of Matt Besler and Omar Gonzalez seems equally emblematic).

It’s the type of squad that perhaps only a coach with Klinsmann’s extensive powers could name. He recently signed a contract extension to 2018, and is entrusted with structuring the technical development of the game in this country from the earliest youth level onward. All of the above players might expect to be mainstays of the national team by 2018 — and the prospect of that group traveling to Russia that year, with World Cup experience already under their belt, is an attractive one. And it’s the kind of luxury planning that only a coach who doesn’t live or die by the results of the next tournament might conceive of.

In the end, Donovan may have scored more World Cup goals than any other U.S. player, and beyond Michael Bradley and Clint Dempsey, he may still be the best U.S. outfield player of his day, but when faced with the choice of building the best team for the next two months or laying the foundation for the next four years, Klinsmann has chosen the latter while making a sacrificial point about what he expects from them.

The irony is that, in doing so, even from his entrenched position of power, the U.S. coach has made himself something of a hostage to fortune — for better or worse, the success or failure of his 2014 team will inevitably be seen in the light of the Donovan decision. Far from dropping the player for good, Klinsmann may yet find he has inextricably linked himself with Donovan for the rest of his reign.