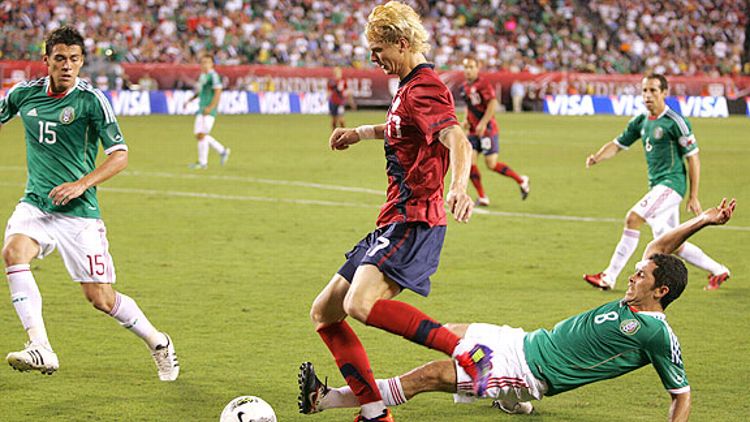 The U.S. men’s national soccer team drew with its rival, Mexico, 1-1 in an international friendly on Wednesday night at Philadelphia’s Lincoln Financial Field. The game might have ended in a tie, but in the hands of new USMNT coach Jurgen Klinsmann, a manager whose communication skills make up for whatever deficiencies he might have as a field tactician, the result must be considered a kind of victory.

Clichés often hold some truth, and the old warhorse “it was a game of two halves” comes in handy here. The first half saw El Tri play a confused USMNT off the park, with the Mexican midfield, driven by Gerardo Torrado and Andres Guardado, playing confident, fluid stuff.

The USMNT, on the other hand, looked as if it should be wearing “Hi, My Name Is …” stickers. The apparent lack of familiarity could be because of some fresh faces on the field, with the likes of Jose Torres and Kyle Beckerman starting in midfield, and the new roles being tried out, with Michael Bradley starting in a far more advanced position than he ever did under his father’s reign.

It was also, however, down to design. After the game, Klinsmann talked about how he set up his team to open the game, insisting they play the ball out of the back rather than launching it upfield. Keeping possession was important to the new USMNT boss. Or rather, trying to keep possession.

Mexico’s first-half goal, in the 17th minute, came off a whipped-in Guardado cross, touched in by Oribe Peralta. But it was the reaction to the goal that was noteworthy.

Upon going down 1-0, the new USMNT coach sprung out of his seat and — with a grin on his face — clapped his side as if nothing was wrong. Or, even more accurately, as if everything was going according to plan.

After seeing his side end the half with more possession and more confidence on the ball, Klinsmann went to his bench at the hour mark, bringing on the young attacking duo of Juan Agudelo and Brek Shea.

Agudelo, who plays for the New York Red Bulls in MLS, replaced Edson Buddle at striker, while Shea, who looks like he wandered in off the set of a Gus Van Sant movie and who is having a breakout season for FC Dallas, came on for Jermaine Jones.

The impact was felt almost immediately. Agudelo’s speed and eye for a pass allowed him to easily move between midfield and the forward line, while Shea’s size and athleticism gave the Mexico backline fits.

Columbus Crew’s Robbie Rogers came on for Bradley in the 72nd, and only a minute later the three subs combined for a lovely team goal, with Agudelo finding Shea, who fended off some El Tri defenders long enough to hit Rogers with a cross for an easy tap-in.

The game ended with the USMNT in control and clearly in a different gear than a gassed El Tri side. For Klinsmann, though, the final whistle wasn’t the end of his night’s duties.

In his postgame press conference, the German soccer legend delivered a class on controlling perception.

A game against Mexico is never just a game, but Klinsmann somehow created a narrative in which the evening’s proceedings were more about learning, experimentation, and trying new things than getting a victory.

As he opened his postgame remarks, the beaming Klinsmann sounded more like a project manager at a tech startup than a soccer coach. “We obviously gave them all the tasks to join one-against-one battles and win their one-against-one situations,” he said. “Slowly, we gave them the task to move step-by-step more forward and get more confident the longer they were in the game and put Mexico under pressure.”

In any USMNT game, especially any game against Mexico, the team is judged on its results by fans who live and die with the side’s fortunes. But within minutes, Klinsmann had the assembled press thinking about “tasks,” about the growth of the side, about … fun?

“It was really enjoyable to see how they then kind of expressed themselves. … This is what we want in this team,” Klinsmann said. “We want them to express themselves and have fun, and I think that’s what we saw.”

His attitude was infectious. Despite drawing with an El Tri team that could hardly be considered full-strength (no Javier Hernandez, only one half from Gio Dos Santos), the USMNT players were buzzing.

“He’s constantly telling us positive things,” Beckerman said. “It gets everyone to really believe. He takes some of the pressure off the guys and puts it on himself. It’s been a pleasure to play for him.”

So everything was all “Kumbaya” and s’mores around the campfire, then? Not exactly. Nobody gets to the position Klinsmann has found himself in without having an edge, without knowing exactly how to get what he wants out of other people.

Despite all the praise, all the invocations of fun, there was little question of who needed to be impressed. Klinsmann has a way he wants to play. The players will need to adapt to that. Not the other way around.

In this light, his postgame remarks were a kind of master class in rhetoric; no room for negativity, no room for questioning his authority or his style of play. If the USMNT players didn’t know it before the game, they knew it after. When Klinsmann was asked why there were no last names on the back of the jerseys, he artfully deflected, “There is no real concept behind that. There are 11 players out there and the numbers should be from one to 11,” he said, calmly.

Then he added, almost as an afterthought: “It’s a little bit of a signal that it’s a fight going on for those numbers.” Meet the new boss.