The Huddle: If You Touch Him, You’re Cut 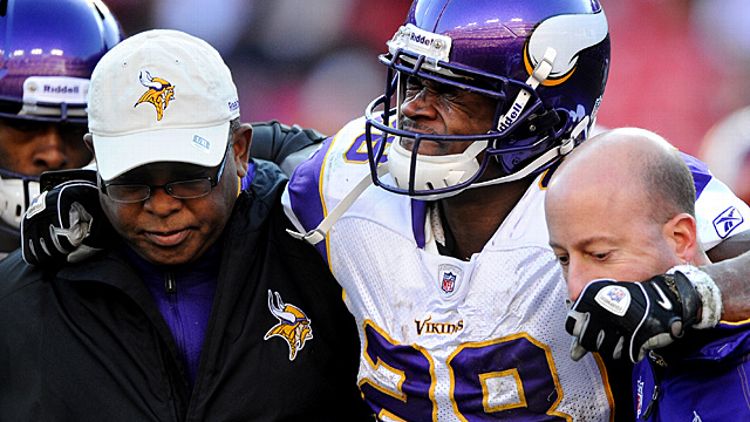 I don’t have any sort of confirmation, but rumor has it this is the video Leslie Frazier showed in the defensive meeting room before today’s practice. See, Adrian Peterson — eight months removed from tearing his ACL — is back, but the Vikings coach isn’t thrilled about the idea of anybody getting near him.

“The rules are simple,” safety Jamarca Sanford said, according to the Minneapolis Star Tribune. “Do not touch 28. If you touch him, you’re cut.”

A reasonable request, to be sure, but the surprising part about all this is the reminder that Peterson was being carted off the field just eight months ago. It was Christmas Eve when Peterson went down against the Redskins, and although ACL recovery time has gotten shorter in recent years, the thought that Peterson could be ready for the Vikings’ Week 1 game against Jacksonville is still shocking. The same concern that accompanies all ACL injuries is sure to come next — the difference between being able to play and being back to full strength — but seeing Peterson in pads this quick is still hard to believe.

According to Adam Schefter, sources close to the Lions say that Jahvid Best will likely start the season on the PUP list and miss at least the first six games. Best hasn’t played since suffering a concussion against San Francisco in Week 6 of last season, and it sounds like he still hasn’t been cleared to return.

The concussion problem isn’t new for Best, who suffered one of the more gruesome hits to the head in recent memory while playing at Cal. Schefter notes that some teams even took Best off their draft boards because of concussion concerns.

The running game is already a major question for the Lions, who will be without Mikel Leshoure for the first two games as he serves a suspension for violating the league’s substance abuse policy, but the real reason for worry here seems to be Best’s long-term health. Players don’t lose 10 months of action from a ding to the helmet, and it’s clear that Best is either prone to this sort of major brain injury or the effect has been compounded by his earlier incident. Either way, as the situation continues, it goes more and more from being merely unfortunate to being truly troublesome.

The potential end of the quarterback battle in Tennessee

Coming into 2012, it still seemed as if Matt Hasselbeck would be the Titans’ man under center while Jake Locker took at least another year acclimating himself to the pro game. According to Jim Wyatt of The Tennessean, that end now seems unlikely. Wyatt believes that the Titans’ quarterback job is “now Locker’s to lose” and that Friday night’s preseason game against Tampa Bay may be the final audition Locker needs to seal up the gig.

Of all the quarterbacks taken in last year’s first round, Locker was seen as the biggest project. There was no doubting his arm and his exceptional athleticism, but whether he was accurate enough to command an NFL offense was still in question. This preseason, it sounds like Locker has command of the offense and has played at a level far more consistent than some would’ve thought. There’s always the concern that going with the young guy threatens to alienate some of the veterans in a locker room, but if Locker continues to prove that he’s the guy, it’d be hard to argue with Mike Munchak going with whoever gives his team the best chance to win.