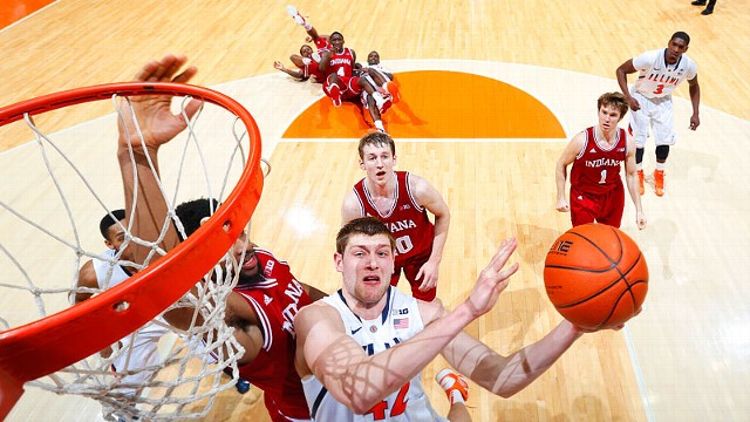 I was going to make a video of Illinois’s comeback against Indiana, but then my editor Sarah Larimer sent me some of the coolest guerrilla footage of the year, from someone standing on the baseline. It starts with Brandon Paul heading to the line for two and hitting the first on a bank shot that Spike Friedman rightly called the most underrated part of the game, and continues through the end: Oladipo’s turnover, Oladipo’s block, and the incredible inbounds play to end it. Credit goes to Rob McColley for the greatest non-TV footage of the season. It’s six minutes long, but the good stuff happens in the first three:


One more video for you, from the end of Duke’s win over NC State:

My two thoughts there are (1) Seth Curry showed more restraint than I would have. A cool 100 was just an open layup away! So much class in that young man. And (2) Coach K’s look of disdain as he passes Mark Gottfried in the handshake line is just epic. Epic, epic, Coach K face. Courtesy of Will Brinson, here’s that moment immortalized as a photo.

Here’s the big question in the ACC right now: Will Miami lose another conference game other than the one at Cameron, giving Duke a chance to finish in a tie for the regular-season championship? If they do, it’ll have to involve a serious misstep. The only team left on the Hurricanes’ schedule with a chance to deal that blow, at least on paper, is Virginia. But Miami gets Virginia at home, and while the Cavaliers’ success in Charlottesville, they’ve already lost to Wake Forest, Clemson, and Georgia Tech on the road. Duke, meanwhile, has to play at Virginia, a distinct disadvantage when another loss would almost certainly end all regular-season hopes.

The Canes’ road to validating their first-half success and securing the championship starts Saturday against UNC, a team they already beat by nine in Chapel Hill. Carolina, for its part, hasn’t had a big win all season, but has managed to navigate an easy early-half schedule for a 6-3 conference record. The problem is things start to get really hard immediately, and it’s not out of the question that a late fade could drop Carolina onto and eventually off the bubble. The Heels need a signature win. This game also involves the odd scenario of Duke rooting for a UNC win, and both sides being extremely uncomfortable with the idea.

To quote Dave Matthews, since that feels pretty necessary right now, “one hand is bleeding, and the other hand holds a gun.” Minnesota is the bleeding hand. Aside from a December win against Michigan State, the Gophers can’t seem to get over the hump in the big games. They’re now 5-5 in the Big Ten and will slip out of the top 25 with a loss on Sunday. Illinois is holding the gun. The Illini already had their collapse, and I think what we saw last night was a desperate team who decided late in the game that they had nothing left to lose. Why not go out blazing? With a 2-7 start to conference play after a solid first two months, it seemed like they’d played themselves right out of tournament contention. Now? Well, in a conference this strong, it’s at least a conversation again. And they’re taking the desperation, and the gun, to Bleeding Minneapolis …

Here’s a measure of the disrespect voters feel for the SEC: When Ole Miss started the conference season 6-0, the highest they rose was no. 16. Fair enough. But after losing to Florida and Kentucky, the best and maybe second-best teams, the voters gave the Rebs a swift boot back into obscurity. Well, fine, no team with Marshall Henderson on the roster can ever be that obscure. But they’re not ranked, and that’s interesting. The Missouri Tigers, meanwhile, remain at no. 21 despite losing to LSU and Ole Miss (and Texas A&M since the last ranking update) and don’t really have a quality win on the schedule unless you count Illinois and VCU. So maybe the SEC is respected? Or parts of it, anyway? I’m confused. Anyway, both of these teams having exciting guards in Henderson and Mizzou’s Phil Pressey. Both like to run, and both like offense better than defense. And if the Rebels win on the road, they shouldn’t fall out of the rankings again.

Aside from one incredibly embarrassing performance on the road at SDSU, New Mexico has been the cream of the Mountain West. With a win at UNLV, they can consolidate their position for the home stretch. But this was a close game the first time around, and UNLV desperately needs a win after dropping two straight to Fresno State and Boise State. A loss puts the Runnin’ Rebs under .500 in conference, and that’s not good enough in a very tough Mountain West.

Things just got super interesting in the Big 12, where four teams — Kansas, KSU, OKSU, and ISU — are clustered at the top, all within a game of each other. The remaining matchups between the top-tier schools obviously carry great significance, and Saturday’s game in Manhattan is the first of the bunch. In the first meeting between the teams in Ames, ISU’s Will Clyburn scored 24 points and grabbed 10 boards, and Kansas State couldn’t stop the home team from scoring in the second half. Expect a lower-scoring game this time around, and another home win.

The Most Embarrassing Loss of the Season Award goes to Kansas for falling on the road at TCU. And it’s not even close. A week ago, the Jayhawks seemed invulnerable in the Big 12, but back-to-back losses — TCU on the road, plus Oklahoma State getting its first road win and ending Kansas’s 33-game home-court winning streak — raises a few doubts. Most notable is the play of Elijah Johnson, which has absolutely tanked since the start of conference play. In six games, he has 35 assists to 34 turnovers, has shot 12-of-40 (30 percent) from behind the arc, and played so poorly overall that even his coach said “We have no point guard.” From now on, every Kansas game on the road becomes interesting. I happen to believe Johnson will emerge from his slump and Kansas will still end up winning the conference and securing a 1-seed, but the certainty from a week ago is gone.

I continue to believe that Louisville is one of the four best teams in the nation — and more importantly, so does KenPom — but I’ll admit that the Cardinals need to prove their road chops again. The recent three-game swerve included setbacks to Villanova and Georgetown. The latter has a similar profile to this weekend’s opponent, Notre Dame. I consider the Irish one of those semi-annoying slow-paced teams, like Virginia, whose results are totally unpredictable. Unlike the Cavs, ND is imbalanced in favor of the offense, but the inconsistency is the same. Regardless, it won’t be an easy venue for a Louisville team that can go into long slumps, but it is a good chance to prove that the previous losses were flukes.

Pittsburgh is my new favorite team, for all the cliché reasons you’ve probably already heard. The Panthers are tough, ugly, gritty, completely without stars, etc. etc. etc. And all the numbers point to the fact that they have top-10 potential. They remind me of a team I wrote about in the preseason, one I called “dangerous outsiders” for similar reasons. Can you guess that team?

Kidding. Classic. It was obviously Cincinnati, and while this game promises — and I mean really, really promises — to be a plodding slug-fest, I’m still super excited.

1b. No. 3 Michigan at Wisconsin, Saturday, Noon, ESPN

Throughout the season, the Wolverines have shown that they’re capable of playing at an elite level and belong among the national title contenders. They have one of the best players in the country, they play highly efficient offense, and they’re suited for a deep tournament run. But to win the Big Ten, they have to answer one last question — can they win against a really good team on the road? So far, the résumé includes road losses to Ohio State and Indiana and two wins against Minnesota and Illinois that become less impressive over time. This is their chance to prove that they can take the next step.

Throughout the season, the Hoosiers have shown that they’re capable of playing at an elite level, and belong among the national title contenders. They have two of the best players in the country, they play highly efficient offense, and they’re suited for a deep tournament run. But to win the Big Ten, they have to answer one last question — can they win against a really good team on the road? So far, the résumé includes a road loss to Illinois and a handful of wins against the dregs of the conference that were never impressive to begin with. This is their chance to prove that they can take the next step.

Get the picture? These are huge games for all four teams in the most interesting conference in America. On a personal note, starting on Sunday I’m taking a swing through Big Ten country. Stops include this game, Tuesday’s Michigan–Michigan State derby, and the Wisconsin-Minnesota clash on Thursday. If anybody has advice about where to eat, what to do, what to see, chime in. And as always, enjoy the games.

Gregg Williams Has Made a Very Interesting Facial-Hair Decision