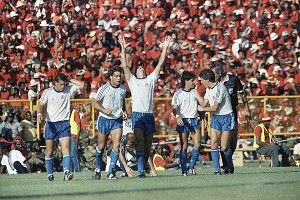 In the second in a series of posts on the future of soccer, Andrew Lewellen looks back on a pivotal moment in U.S. soccer history — the 1990 World Cup — and how it changed the trajectory of the sport in the States. For Part I of the series, on the recent changes in high school and youth soccer, click here.

If a “modern era” in American soccer exists, it began on November 19, 1989, when the U.S. National team, made up of current and former college players, played Trinidad and Tobago in Port-of-Spain for the final spot in the 1990 World Cup. Trinidad and Tobago needed only a tie to advance to the World Cup. The U.S. needed a victory. Of course nobody expected the U.S. to win; they hadn’t played in a World Cup since 1950.

But that game against Trinidad and Tobago had an additional dramatic wrinkle: The year before, in 1989, FIFA had awarded the United States the rights to host the 1994 World Cup. Because of the country’s lack of a professional league and its general ambivalence toward the world’s sport, the decision — as FIFA’s decisions often are — was met with criticism and disdain. But FIFA saw an opportunity to use the World Cup to grow the sport in the United States. As the host country, the U.S. would get an automatic bid to the ’94 World Cup. But if they failed to qualify for the ’90 World Cup, it would be an embarrassment, proof that the U.S. could not play at an elite, international level — and did not deserve to host the ’94 World Cup.

Not only was American pride at stake, so were the players’ jobs; they knew that if they lost to Trinidad and Tobago, their contracts — and their salaries — with the U.S. Soccer Federation would be in jeopardy.

At the time, very few of the Americans played with professional clubs. There was no top-tier professional league in the United States. The North American Soccer League, which had started in 1968, had folded in 1985. Some of the Americans played for teams in domestic leagues, but they were more like semi-pro teams, nothing close to the international clubs where the world’s best players competed.

Cobi Jones, a member of the ’94, ’98, and ’02 U.S. World Cup teams and the all-time leader in appearances for the national team, puts it this way: “During that time, there was no place really to play here in this country. For the guys that wanted to be successful here, for guys that wanted to be successful overseas, you were a journeyman. You had to go and fight and travel. There was no respect for American players. So you had to fight day in, day out for every little bit of credit that you received.”

And on that November day in 1989, the U.S. fought — and won. A goal by Paul Caligiuri — sometimes called “the shot heard round the world,” a blast from 35 yards out that dipped like a knuckleball past the diving keeper’s hands and into the lower corner of the goal — earned the U.S the final spot in the 1990 World Cup in Italy. The team stayed together, the players kept their jobs, and rather than being ridiculed as the nation chosen to host a World Cup but unable to qualify for one, the United States sent a group of college kids to Italy play for the world’s most coveted soccer trophy.

The U.S. was eliminated from the 1990 World Cup in the first round, after losing all three of their games. But playing in that competition — against Czechoslovakia, Austria, and three-time World Cup winner Italy — gave the players experience competing at the highest level of international soccer. After the ’90 World Cup, several American players signed contracts overseas: Tab Ramos in Spain, John Harkes in England, Eric Wynalda and Paul Caligiuri in Germany.

Two years later, in 1992, a new group of college kids were competing for the U.S., this time on the under-23 national team, trying to earn a spot in the ’92 Barcelona Olympics. They clinched that spot with a 1-0 win over Haiti. In the Olympics, they went 1-1-1 in group play, and, like the 1990 World Cup team, were eliminated from the tournament in the first round.

So now U.S. Soccer had a pool of, if not successful, somewhat experienced national team players. But the majority of those players were still not members of professional clubs, and with the ’94 World Cup on the horizon, U.S. Soccer wanted to develop a professional training environment for them. So it created a training camp for the national team in Mission Viejo, California. A core group of players from the 1992 Olympic team formed the nucleus of the camp, and for the year and a half leading up to the World Cup, they trained together.

Two of those players were Jones and Alexi Lalas.

“I had never played a professional game [until] the moment I’d stepped on the field in ’94 World Cup,” says Lalas, who was also a member of the ’98 World Cup team. “Because of the lack of a professional league [in the U.S.], many of us had never been on the books.”

“Nothing” was how Cobi Jones describes his professional experience prior to the ’94 World Cup.

Not only had Lalas and Jones never played professional soccer, they never planned to.

“I didn’t grow up emulating professional soccer players,” says Lalas. “I was into music and hockey. It’s too bad. Soccer was just something for me to do. [I] never had aspirations of playing in a World Cup.”

Jones was in the same position. “I was a typical American kid. I played soccer for fun. I had no aspirations to play professional soccer. I didn’t watch it on TV. It wasn’t there. I didn’t have the knowledge or know-how to go search it out. And to be quite honest, I didn’t have the interest.”

The model of that training camp was not — and is not — the norm in international soccer. National teams are formed by the country’s best players, who are pulled into a training camp from their club teams a month or so before the World Cup. But without legitimate professional opportunities, the national team camp had to suffice for American players.

And it wasn’t easy, says Jones. “It was us … there, every day, day in, day out, sweating, back-breaking, dealing with the coach and the situation of are you going to make it or aren’t you. It was a stressful situation. [It] might not have been the best situation as far as a professional atmosphere, but … it’s what I think got us through in the end because we had that bond that was so tight. We were one unit working together.”

Lalas credited those two years as some of the most important in his development as a player. “Bora Milutinovic [the national team coach] broke me down and showed me how every movement [I made] has a purpose.”

But Jones said there was an adjustment when American players who were playing professionally overseas joined the team.

“We’re playing together all these games, and then … a month before [the World Cup], all the pro guys come in from overseas and they’re starting the majority of the positions. There’s a little bit of bitterness, but you had to get over it, and that’s where the group bonded together. You leaned on your buddies for support if you got knocked out of that starting spot.”

In the 1994 World Cup, the U.S. tied Switzerland, beat Colombia, and lost to Romania to advance to the second round of the tournament, where they lost 1-0 to Brazil, the eventual champions.

After the tournament, professional opportunities for American players — those guys who’d had no professional experience before the World Cup — exploded. Cobi Jones signed a contract with Coventry City of the English Premier League, Alexi Lalas signed with Padova in the Italian Serie A (then the best league in the world), other players signed with teams in England and Brazil. When the MLS started two years later, many Americans returned to the U.S. to play.

Those changes, all of which date back to that day in November 1989, led the sport to where it stands now: 19 MLS teams; the Development Academy; which provides young American players a clear path to an American professional league, training, and coaching that far surpasses anything that previous generations had received; and American players like Clint Dempsey, Michael Bradley, and Jozy Altidore playing in top European leagues.

Though more training and professional opportunities exist now for American soccer players than ever before, on the international stage, the United States still doesn’t have significant achievements. Only one USMNT advanced further than the 1994 team: the 2002 squad, which reached the quarterfinals. And this past March, the U.S. under-23 team, made up almost entirely of professionals from the MLS and foreign leagues, failed to do what their precursors accomplished 20 years ago: qualify for the Olympics.

As this generation of young American players receive better technical and tactical training, it’s crucial for their success that they inherit the determination so that was integral to the previous generation’s accomplishments.

Tab Ramos, a member of the ’90, ’94, and ’98 World Cup teams and currently the coach of the under-20 national team, said: “When we qualified for our first World Cup, it was a shock. At the time there wasn’t a whole lot of soccer development [in the U.S.], just a bunch of players who were the most determined to stick with something and fight.”

Jones agrees. “Everything was a battle for those guys back in the day. You learned to strive and survive and raise yourself to the challenge. In 2006 … if [you’re] not successful [you’re] going back to [your] club teams. You’re not successful in ‘94, you’re going back to your job working in the bar. That’s a big difference.”

He continues, “We’re developing the players technically a whole lot better than my era … and then as we go down the road … all of them are going to have this technical ability, but then it’s going to be the ones that have that fire and that spark inside to strive — they’ll come through.”

Filed Under: Soccer, US Soccer