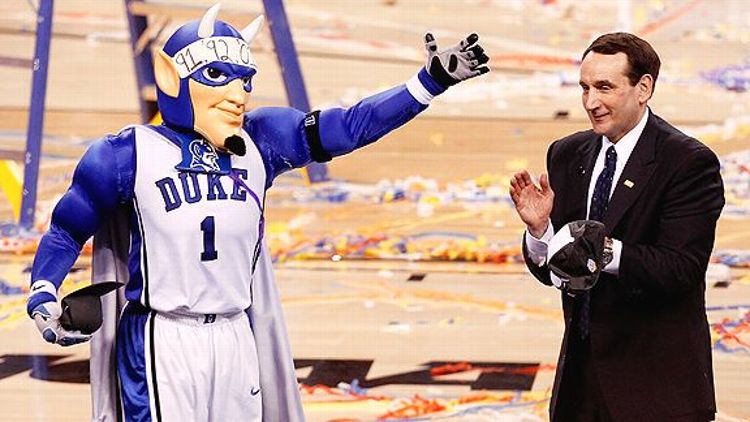 Attention Fans of Duke Basketball: Yes, it’s the offseason. But this month, you can catch a preview of your team. The Blue Devils are visiting China for the “Friendship Games.” What are the Friendship Games? Glad you asked! Let’s take a look, Q & A style.

What on Earth? Duke? China?

That’s correct. For the next ten days, the Duke men’s basketball team is visiting China and Dubai. They’ll be playing four exhibitions, and the people that name things are calling it “The Friendship Games.” Here’s the lineup:

Game 1: Today, in Kunshan, China, against the U-23 Chinese national team. This game is now officially over, and Duke won 77-64. Freshman Austin Rivers led the team with 18 points, and here’s a picture of Andre Dawkins dunking on a Chinese player. But the best part of the game? The Kunshan crazies.

Game 2: Thursday, in Shanghai, against the same Chinese team. The game will start at 8 a.m. EDT, and be televised on ESPNU and ESPN3.

Game 3: Next Monday, in Beijing, against the same Chinese team. Again, the game is at 8 a.m. on ESPNU and ESPN3.

Game 4: Next Thursday, in Dubai, against the United Arab Emirates national team. This one is at 1:30 p.m., again on ESPNU and ESPN3.

Man, Duke is going to kill the UAE national team

I know, right? One possible complication, though: the floor is made of oil.

Why are they playing the U-23 Chinese team?

Bad timing. The national team already committed to playing at a London tournament that serves as an important tune-up in advance of Olympic qualifying. So Duke is stuck playing the youngsters, which means the games might not be very competitive.

How will the massive U.S. debt to China affect these games?

The Chinese team will start every game with a 47-0 lead.

Let’s get serious: why is Duke going to China?

The short answer is that an NCAA program is allowed to travel abroad in the summer once every four years. A lot of teams take advantage. This month, the Georgetown men’s team and the Valparaiso women’s team are also touring China. The unique part about the Duke trip is that it’s being televised by ESPN, a first for summer exhibition games.

Coach K hasn’t had a chance to travel lately because of his summer responsibilities with the U.S. national team, but there are two reasons why the timing of this trip is advantageous for the school.

1. Duke is opening a new campus in China next year, and their Fuqua business school has some programs in Dubai. This is basically a chance for publicity (“expanding the brand,” as the student newspaper aptly puts it), and it should come as no surprise that it was conceived by the dean of the business school and a “vice provost for global strategy and programs.” His last idea was volleyball in Siberia — total disaster.

2. The team also played abroad in 2002, the same year J.J. Redick and Shelden Williams were freshmen. When a team chooses to travel overseas, they get more than just game experience; the NCAA also gives them 10 practices beforehand to prepare. As with 2002, some of Duke’s best players are incoming freshmen, like standout guard Austin Rivers, and you can bet Coach K jumped at the opportunity to have some extra preparation time to smooth the transition.

Where can I follow the results and see highlights?

GoDuke.com’s Friendship Games Central will be the source for video recaps and replays and things like that.

The Chronicle’s Taylor Doherty will also be traveling with the team and blogging.

Why would I want to watch this when Duke will win every game by double digits?

B. Austin Rivers. It’s your first chance to see Duke’s incoming freshman guard (and the son of NBA coach Doc Rivers) at the college level. Ben Cohen hinted at his greatness here last week, and barring injury he’ll be one of the most electric players in Division 1 this season.

What were the five best tweets about the trip so far?

5. From DukeBluePlanet, who kept us abreast of the score this morning:
“Arena plays music during play, plus shooting star sound effect for most jumpers. And “baby you’re a firework” after made FTs by China.”

The chant, loosely translated: “When you go back to America, please try to demonstrate some fiscal responsibility in your professional careers so you don’t ruin the world market.”

It turned out the song wasn’t actually being played on the loudspeaker; Marshall Plumlee was just humming it really loudly from the bench. Also, that reminded me of this video, where LeBron gets dunked on by a Taiwanese kid and smoke shoots out of the backboard.

2. From Jeff Capel, Duke assistant, with picture:
Site of the Duke-Kunshan campus here in China. Pretty amazing vision by the leaders at Duke.

Absolutely gorgeous. Well done, Duke leaders. Great work with the mud patch there on the left, too.

1. From a UNC fan, after being told that Duke was headed to China:
“Not far enough away.”

(Bonus points a follow-up by yet another Tar Heel: “Can they stay?”)

Any other good articles about the games?

GoDuke’s coverage has been solid. Here are a few fun reads:

What else is the team up to while they’re there?

They’re doing a youth clinic on August 19th, plus a few outdoor practices. Coach K figures if the team can play well in debilitating smog, ACC road crowds won’t faze them at all.

They’ll also be heading to the Great Wall and meeting with foreign dignitaries, according to this preview article from the Chronicle.

Anyone else going on the trip besides the mainstays?