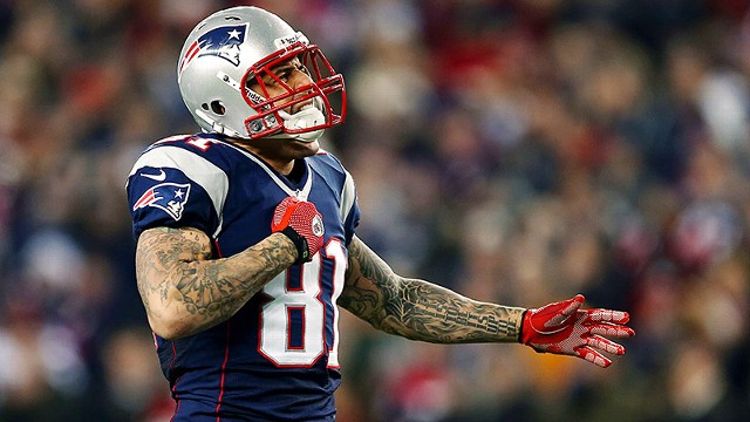 The Patriots swiftly reacted to the arrest of tight end Aaron Hernandez on Wednesday morning, releasing him just hours after he was taken into custody. While it had been known for days that Hernandez was likely to be arrested after being implicated in the killing of semipro football player Odin Lloyd, there had been no clear indication that the New England organization would react this quickly and decisively to an arrest. The Patriots’ brief statement on the move makes their position very clear:

A young man was murdered last week and we extend our sympathies to the family and friends who mourn his loss. Words cannot express the disappointment we feel knowing that one of our players was arrested as a result of this investigation. We realize that law enforcement investigations into this matter are ongoing. We support their efforts and respect the process. At this time, we believe this transaction is simply the right thing to do.

Sports fans know about the double standard that gets applied to the vast majority of criminal cases involving athletes. The punishment meted out from a team depends almost entirely upon how talented that player is. One DUI can be enough to get a journeyman or borderline talent released immediately; for a superstar, that same DUI suddenly inspires the team to take an interest in due process and internal investigations. It’s an elaborate bullshit dance that, few exceptions aside, every team in every sport plays.

That the Patriots aren’t playing that game with Hernandez is fascinating and raises plenty of questions. If Hernandez is innocent until proven guilty, why is this move “the right thing to do” based upon an arrest? What do the Patriots know that the public doesn’t? It’s hard to believe that there is some long-standing history of problems that led the Patriots to make this move; after all, they signed Hernandez to a lengthy contract extension and gave him $16 million in guaranteed money last August. And when they signed that deal, Pats owner Robert Kraft had very different things to say about Hernandez. “I just think he’s a super player, and really a first-class guy,” Kraft said at the time. Smarter people than I have written pieces on the moral issues surrounding the Hernandez case and what it means (and doesn’t mean), but it’s clear that this move is something unexpected and unlikely.

The implications for the Patriots on a football basis are as yet unclear. Having once been the envy of the league with their two dominant young tight ends, New England’s cupboard at the position is now bare. Hernandez is gone. Rob Gronkowski has undergone five surgeries in seven months, and his availability for the beginning of the regular season remains unknown. New England could start Week 1 with Jake Ballard and Michael Hoomanawanui as the tight ends in its base two–tight end set, guys with 63 career catches between them. Hernandez almost matched that total last year, and he missed nearly seven whole games.

Patriots fans can look to how the team played without Hernandez last year with some hope, but I don’t know that it applies here. As Aaron Schatz noted on Twitter, the Patriots were 5-1 without Hernandez in the lineup last year, averaging 42.3 points per game in those six outings. (Hernandez also missed virtually all of the Week 2 20-18 loss to the Cardinals after suffering a sprained ankle halfway through the first quarter.) That was a Patriots team, though, that had Gronkowski active for all six of those games. Wes Welker and Brandon Lloyd were starting then, too. Now, it could very well be Ballard, Hoomanawanui, Danny Amendola, and Michael Jenkins starting in Week 1. And what if Amendola gets hurt? Tom Brady’s a great quarterback, and he makes the receivers around him better, but there’s simply not the same level of talent surrounding him now, especially after Hernandez’s release.

In all likelihood, the Patriots will need to make some changes to their offensive balance. In 2012, New England ran the ball with more credibility than it has since the halcyon days of Corey Dillon in 2004. Stevan Ridley emerged as a back capable of running between the tackles with some consistency, while the offensive line in front of him continued to develop, especially at tackle. Since 2004, the Patriots have had only one year — 2010 — when they ran the ball more than they passed it on first-and-10 in situations where they were within two scores of their opponent (my default split to see what they do in typical game situations that aren’t defined by the score). Over the past two years, they’ve thrown the ball nearly 56 percent of the time in those situations. It wouldn’t be a surprise to see them rely more heavily upon their running game in 2013, even if they continue to play at a breakneck pace.

Financially, the ramifications of the move are even murkier. In the short term, the Patriots will have just more than $10 million in dead money hit their cap as a result of cutting Hernandez. Because they released him a mere season after signing him to an extension, $10 million of his $12.5 million signing bonus, which was spread over the seven years in his extension, accelerates into the present. Since Hernandez was released after June 1, the cap hit is spread over two seasons, but combined with guaranteed base salaries for 2013 and 2014, the financial impact is noticeable. The Patriots will have $4.1 million in dead money for Hernandez on their cap this season, with a more painful $8.6 million coming next year.

The Patriots can try to recoup some of the money owed to Hernandez, but it’s unlikely to prevent the deal from hitting their salary cap. NFL Network’s Ian Rapoport noted that Hernandez’s contract does not contain any “failure to perform” clauses that would allow the Patriots to skip out on paying him the remaining $3.25 million due from his signing bonus or his guaranteed base salaries in 2013 ($1.32 million) and 2014 ($1.14 million). According to Rapoport, most Patriots contracts contain such a clause, but Hernandez’s deal only holds that to be the case in terms of his workout bonuses, which should save the Patriots a mere $82,000 in 2013 and $500,000 in 2014. The only way the Patriots could save more money would be if another team signed Hernandez, with their payments offsetting some or all of the money the Patriots were otherwise due to pay him.

And let’s be honest: All of this still comes with giving the Patriots some significant benefit of the doubt. If this were the Saints or the Cowboys cutting a notable player with no due process, the organization would come in for significantly more criticism. It would be treated as a sign of the rot within their building, a sign that they’re out of control and making rash judgments. In the preseason, we would all talk about how they were embroiled in turmoil and might collapse this season. It says something about how the Patriots are perceived that those same criticisms aren’t really being made here. In the long run, we might look back and say they should have.