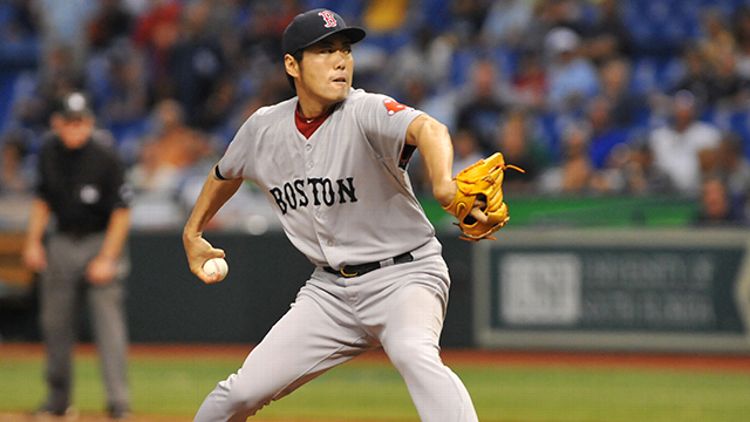 Facing Red Sox closer Koji Uehara in the ninth inning, the Orioles’ red-hot designated hitter cranked a leadoff triple, then came around to score what would prove to be the winning run. What made that three-bagger miraculous were the streaks it shattered. That triple marked the first hit — the first baserunner — Uehara had allowed in a month. The run Valencia scored marked the first time anyone got on the board against Uehara since July 6, and the first earned run since June 30.

With that streak over, it’s time to see how Uehara’s two and a half months of unhittable excellence rank against the greatest closer runs in history. To assist me in this mission, we enlisted the help of the invaluable Baseball-Reference Play Index and skilled researcher Ryan Spaeder. Using the Play Index tool and Baseball-Reference’s database, he scoured all relief performances about as long as Uehara’s dating back to 1960, the year that Chicago sportswriter Jerome Holtzman codified the save rule.

Before we get to the results, one theme jumps out and smacks you in the face: We’re in a golden age for closers, or at least for big numbers by closers. Three of the top 16 stretches in the past 53 years happened this season, with eight of the top 35 popping up since 2010. Consider some of this year’s closers who did not make the top 10:

• Greg Holland has struck out a staggering 94 batters in 61 innings, while allowing just 15 walks and three homers, good for a 1.33 ERA and 1.35 FIP. In his best stretch this season, Holland fanned 55 batters, while surrendering just 22 hits, five walks, and three runs over a span of 40 innings … and that stretch ranked just 32nd on our list.

• Craig Kimbrel just had his worst outing of the season on Tuesday, yet still owns a 1.33 ERA for the season, with 89 strikeouts in 61 innings. At one point he went through 34⅓ innings during which he struck out 54 batters, put just 26 men on base, and relinquished just two homers … and he ranks no. 16.

• Other closers having monster seasons in 2013 include Mark Melancon (1.07 ERA, 1.68 FIP, strikeout-to-walk ratio better than 8-to-1) and Kenley Jansen (1.98 ERA, 2.10 FIP, 102 strikeouts and 16 walks in 72⅔ innings pitched). Others like Joe Nathan and Joaquin Benoit have put up abnormally low BABIPs and abnormally high strand rates, with ERAs under 2.00. Aroldis Chapman has whiffed 105 batters in 59⅔ innings and has looked, at times, like the most dominant pitcher who ever lived.

What is it about these past few seasons that has produced such outrageous numbers from closers?

It starts with specialization. Relief pitchers are being used for shorter and shorter stints, and closers are no exception, with outings lasting longer than three outs becoming extremely rare. Knowing they’ll be needed for only a limited number of pitches, closers don’t have to hold anything back, dialing up their fastballs as high as they can possibly go, and throwing breaking pitches and changeups at max effort too.

Another theory is that closers often face relatively weak hitters. A study done by SI.com’s Joe Lemire showed that tougher hitters tend to come up more often in the eighth inning than the ninth, due to the way lineups are configured and where we’re at with league offensive levels. But all managers, from the analytical Joe Maddon to others less persuaded by data, tend to use their closers in the same way. If they’ve got a lead of three runs or fewer and it’s the ninth inning, the guy with the cool entrance music and the big save totals is coming in. Sometimes that means the closer faces the heart of the order. But many other times it means facing the 7-8-9 hitters, a situation that’s a waste of a dominant reliever’s talents but also par for the course in today’s game.

Managers have been limiting closer workloads and managing the ninth inning by rote for a while now. Sift through this list of the most valuable relief-pitcher seasons of all time and you’ll see that many of them date back to the ’70s and ’80s, when managers treated the closer role as more of a true fireman’s job. A pitcher like Goose Gossage would get called on to douse a rally as early as the seventh inning, then stay in the game and close it out, sometimes throwing 40 or 50 pitches in one night. But the bigger reason is that the game is radically different now, and not even a young, strapping fireballer like Kimbrel or Chapman is going to sniff 100 innings in a season, or even 90. It may just be that the past three or four years have marked a tipping point in that progression and specialization, and that we may just have a particularly strong group of closers in 2013. You could probably also make a case for teams valuing defense more now than they did in the PED/Moneyball era, paying closer attention to run-prevention strategies like shifts. Whatever’s going on, it’s a great time to be a big league closer.

Let’s move on to the 10 best closer runs since 1960. Note that these streaks were ranked by opponents’ OPS allowed. Though that stat can vary significantly based on external factors such as batting average on balls in play, it also provides a nice snapshot of a pitcher’s dominance. A metric like ERA can get swayed by random bunching of a few hits on a particular day. With opponents’ OPS we’ve got a quick and dirty way to measure the most elemental part of a pitcher’s job: Did he get the batter out or not? (Also, more advanced metrics such as wRC+ aren’t covered by the Play Index.)

10. Fernando Rodney, 2012, 40 IP, .409 OPS allowed: Of all the rabbits the Rays have pulled out of their hats in the past five years, Rodney ranks near the top. In 2011, injuries and off-the-charts wildness limited him to just 32 innings pitched, with a 4.50 ERA and more walks than strikeouts. Tampa Bay bought low, made a few adjustments, and presto — Rodney posted his lowest walk and home run totals ever and delivered a 0.60 ERA. For some of these pitchers, the 30- or 40-inning hot streak looked a lot better than their line from the rest of the year. Rodney was more or less untouchable from Opening Day to the final day of the 2012 season.

9. Dennis Eckersley, 1989, 39 IP, .407 OPS allowed: Mariano Rivera might have the best résumé of any closer who ever played. But during the A’s glory years of the late ’80s and early ’90s, Eckersley was close to unbeatable (except for … well, you know). During his peak streak in ’89, Eck struck out 35 batters, and walked one.

8. Joe Nathan, 2006, 35⅓ IP, .407 OPS allowed: At the risk of using a homer reference (too late), Joe Nathan is the Tim Raines of post-millennial closers. Just as Rock was an elite player who spent the bulk of his career in Rickey Henderson’s shadow, Nathan’s been a top stopper for nine years now while toiling in the shadow of Rivera, Jonathan Papelbon, and other somewhat better and more famous ninth-inning men. Still, Nathan has been a metronome of excellence, with six of the top 100 streaks in the closer era.

7. Takashi Saito, 2007, 30⅔ IP, .374 OPS allowed: The Dodgers have squeezed some enormous seasons out of their closers this century, with Saito’s ’07 campaign a shining example. Sure, he rode a sub-.200 BABIP to this incredible stretch, one that yielded just 12 hits in 30⅔ innings. Still, Saito proved an excellent replacement for Eric Gagne, posting video-game strikeout rates in his first three big league seasons … in which he was 36, 37, and 38 years old.

6. Eric Gagne, 2003, 43 IP, .363 OPS allowed: Let’s get the caveats out of the way first. The way closers are used in today’s game, they’re often overrated and overpaid. But living in L.A. and going to Dodgers games from 2002 through 2004 was an absolutely electric experience, largely because of Gagne. The Montreal native set an all-time record with 84 consecutive converted save chances. But the numbers, as impressive as they were, didn’t do him justice. Gagne breathed high-90s fire past the fiercest hitters in the league during one of the toughest periods ever for pitchers. Then he’d drop in a change or a cartoonish slow curve, turning anyone and everyone to a pile of mush. As many amazing moments as L.A. sports fans have had in the past 10 to 15 years, it’s still tough to beat Gagne loping out of the bullpen, “Welcome to the Jungle” blaring, and 56,000 people losing their minds.

3. Craig Kimbrel, 2012, 32⅔ IP, .348 OPS allowed: Good luck trying to choose from Kimbrel’s first three seasons as a major league closer. He’s struck out at least 38 percent of the batters he’s faced in each of those three years, with an average K rate of 43 percent, which trumps any other pitcher. Gun to the head, you’d go with Kimbrel’s 2012 as the best of the three, because punching out more than 50 percent of the batters you face (with a 6 percent walk rate) shouldn’t be possible, unless you’ve logged 40 straight hours pumping up your abilities in Baseball Stars.

2. Robb Nen, 2000, 38⅔ IP, .337 OPS allowed: Sixty-two strikeouts, seven walks, one home run, and 15 hits — that’s what Nen allowed during the best stretch of his career. The league’s best palindromic closer produced his seventh straight excellent season as a ninth-inning guy in 2000, then followed that with two more great years. Then, after saving 43 games with a 2.20 ERA, Nen went under the knife twice, seeking to repair a scragged labrum and torn rotator cuff. It all ended with Nen never pitching again, marking one of the most abrupt ends ever for a pitcher at the top of his game.

1. Koji Uehara, 2013, 33⅔IP, .214 OPS allowed: Just to clarify, that .214 number doesn’t refer to batting average; it’s the sum of the on-base percentage and slugging average compiled by all of Uehara’s opponents over a stretch of two and a half months. It’s also, by far, the best run by any closer in baseball history. Dig these digits over those 33⅔ innings: 46 strikeouts, two walks, eight hits, zero earned runs.

You could go on and on with the numbers. Uehara threw a total of seven balls in his four outings leading into Tuesday’s game against the O’s. Of the 53 splitters he threw in September prior to Tuesday’s game, batters swung and missed on 22 of them. Granting that it’s a fantasy stat and not necessarily the most robust metric for analytical or predictive purposes, Uehara’s 0.57 WHIP is the best all time for a pitcher with as many innings as he’s thrown.

Boston’s fourth choice for a closer this year has proven to be the game’s best relief pitcher in 2013. And he’s just completed a run that might not be topped in our lifetimes.