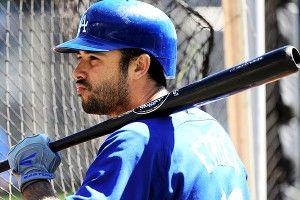 As the calendar flipped over to June last season, the Dodgers faced what seemed like an easy decision.

Six and a half months earlier, they had signed All-Star center fielder Matt Kemp to a $160 million contract extension, ensuring that their franchise player wouldn’t test free agency at the end of the following season, and locking him up through 2019. Now, Andre Ethier stood four months from free agency himself. The two Dodgers outfielders had reached the majors together in 2006. They were the two best hitters on the roster, and Ethier looked on his way to a monster breakout season, hitting .324/.381/.569 through the first two months of the season. Just before Opening Day, Guggenheim Partners had given Frank McCourt the billions of dollars he so deserved for looting his own team for years. The new owners’ pockets were bottomless, their commitment to winning resolute. Facing the choice of losing their slugging right fielder to free agency or getting his name on a long-term contract, the Dodgers did what you’d expect from a team with no spending limits: They shot the moon, handing Ethier $85 million to secure his rights through 2017 — or 2018 if they exercised their $17.5 million club option.

Fast-forward just six months, and the Dodgers are not at all shopping Ethier wink-wink nudge-nudge.

So how did we get here? How did Ethier go from cornerstone player to getting mentioned in 2012 trade rumors this quickly?

For starters, blame binary thinking. We’ve already discussed what rigid and limited thought processes can do to a team. In strip-mining their farm system for James Shields (and Wade Davis), the Royals fell into the same trap the Dodgers did with Ethier. In the Royals’ case, management decided they could either win with a pitcher who met their narrow definition of an ace, or lose without one. By whittling down their list of available decisions, they swept aside other possibilities, such as how much Anibal Sanchez or Edwin Jackson or Shaun Marcum or Kyle Lohse might help the team while costing nothing in trade, or what playing the replacement-level Jeff Francoeur in right field would do to the team’s record.

In the Dodgers’ case, framing the Ethier decision based solely on keeping or losing the team’s starting right fielder also ignored multiple other factors — chief among them, the meatiest market for outfield talent in years. If they were a poorer team, this wouldn’t necessarily be a problem. They’d let Ethier bolt, and look for cheaper options, be it a trade for a Denard Span, or signing a Melky Cabrera. But the Dodgers have more money than God, and they’ve spent it as aggressively as any team in recent memory. Yet they now sport a payroll around $240 million with a roster that might not be the best in their own division. For that, blame The Curse of Plenty.

In a world where even the Yankees have tightened their belts, the outrageously rich, outrageously spendy Dodgers would seem to have a huge edge over the rest of baseball. But even a team operating in the Dodgers’ stratosphere needs to make smart choices.

The first bad choice (not counting Juan Uribe, Matt Guerrier, and several others) came in spending all that money on Ethier. The Dodgers were no doubt at least partly seduced by Ethier’s incredible .950 OPS to start the year. Unfortunately, he quickly fell back to career norms, hitting just .264/.336/.405 the rest of the way in 2012. At his best, Ethier is an above-average hitter who crushes right-handed pitching (.311/.387/.526 against righties for his career). But he can’t hit lefties to save his life (.238/.296/.352) and rates as a below-average fielder and base runner who’s likely to get worse in both of those areas as he ages (he turns 31 in April and is signed through age 35).

When you’re a team with the Dodgers’ resources, you shouldn’t have to settle for Ethier, not when so many better options lie in front of you if you’re willing to wait a few months. If money’s no object, why not let Ethier play out his walk year, then make a play for Josh Hamilton? The Dodgers might be haggling over how much of their pending $6-7 billion TV deal they’ll need to share with the rest of baseball. But whatever that number is, it wouldn’t be nearly enough to cancel the benefit of spending a mere $8 million a year more to have Hamilton in your outfield instead of Ethier for the next half-decade. And hell, if Hamilton chose to play somewhere else, you could always come back to Ethier with an offer. Acknowledging baseball’s booming revenue streams and the uncertainty of free agency, in what world was Ethier going to get significantly more than $85 million from any other team? When you have nearly limitless money, there’s a strong temptation to spend it. The Dodgers did, and now they’re left with a merely good player at a corner outfield spot, where they might have landed a great one.

Two months after the Ethier gambit, the Dodgers did something far more reckless: They spent more than a quarter-billion dollars on Adrian Gonzalez. Well, not all of it was for Gonzalez. About $140 million was earmarked for Josh Beckett and Carl Crawford. But Beckett and his fastball were a shadow of their former selves, and Crawford became so plagued by injuries that we now have to ask how much he’ll play over the final five years of his contract, let alone if he’ll even come close to his Tampa Bay peak. The Dodgers made the trade for a couple of reasons. First, they saw a chance to overcome the Giants’ late-season NL West lead and win the division. (Didn’t happen.) Second, this time they correctly identified an emerging trend in the game. While loaded teams like the Dodgers were signing big-name players to long-term extensions before they could test free agency, so, too, were teams of more modest means, like the Reds. When teams pay up for the Vottos and Cains rather than risk losing them in the open market, you’re left with scant elite talent to bid on. So even if you’re the Dodgers, with all the money in the world to spend and the will to spend it, you’re left staring at a bunch of Napolis and Victorinos, rather than truly first-rate talent. That’s how you end up making a gargantuan trade for Gonzalez … even though, given his 2012 performance, he very well might not be an elite player anymore.

Finally, teams only have so many positions to fill. In locking up Kemp and Ethier and trading for Crawford, the Dodgers found themselves with about $350 million committed to three outfielders. No matter how deep your war chest, a team’s going to draw the line somewhere. In the Dodgers’ case, having every outfield spot filled forced them out of discussions for Hamilton, as well as several other quality players.

So now we’re left with a Dodgers team that may or may not be fielding offers for Ethier, a few days after the best outfielder on the market signed with the team that plays 30 miles away. Several attractive outfield options are still available for less money, meaning it’s likely the Dodgers would need to pick up a big chunk of Ethier’s contract to get anything resembling a strong return. Nick Swisher, the player the Dodgers are rumored to be wooing if they’re able to trade Ethier, doesn’t come with severe platoon splits. He’s also 32 years old, with the kind of skill set (moderate batting average, lots of walks, negligible speed) that doesn’t tend to age all that well.

That, in a nutshell, is The Curse of Plenty. The Dodgers have more money to spend than anyone, without enough top players to go after. They’ve clogged their roster with merely decent talent at multiple positions because their general manager is impulsive and overeager to spend that money without properly gauging the market for the few elite talents out there. One great way to find those top players is to develop them yourself, but the Dodgers have shipped away several strong prospects to make reactionary trades, such as the Gonzalez deal.

This is still likely to be a good team, one that’s in the hunt for a playoff spot. But because of a few shortsighted moves and a market that can’t provide the great players they crave, the Dodgers may well find themselves back in familiar territory next fall: looking up at the Giants, and wondering where it all went wrong.