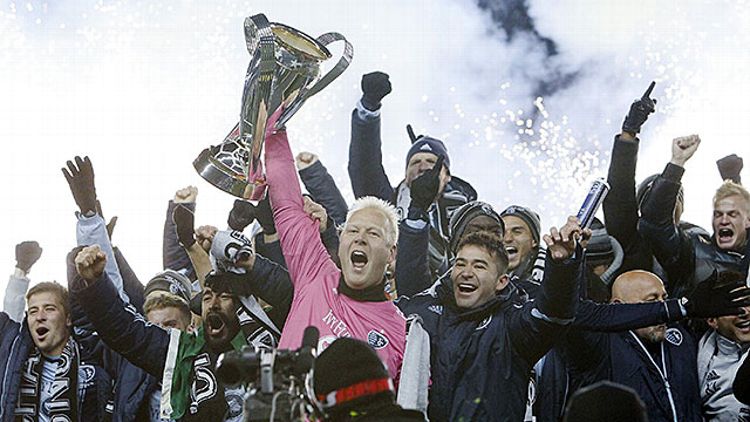 Saturday’s MLS Cup final wasn’t a game for the ages, though it ended up being a pretty engrossing one and did have its own mythical qualities for future generations. It was the coldest MLS Cup final ever, featured a penalty shootout that went to the 10th round, and we saw Sporting captain and keeper Jimmy Nielsen labor through what may be his last game with broken ribs.

So the highlight reel will tell its story, and it won’t be wrong exactly. But the memories of those who were there at any particular game will always differ slightly from the official history. For one thing, I’ve always believed that, try as we might to impose the logic of highlights onto personal sporting memories, the mind has a way of misbehaving — it always chooses its own, strange thumbnails.

That’s why when I think of the 2013 MLS Cup final, I’ll always think first of a tackle in the 85th minute, when Sporting Kansas City’s Seth Sinovic made a block on Alvaro Saborio that prevented a shot on target.

In the greater scheme of things, it may or may not have been the most important tackle the left back has ever made, though Nielsen, already struggling with the conditions and his fitness, was doubtless relieved not to have to dive at another Saborio shot, having already conceded one goal to the striker. But for me, the moment represented a number of threads leading in and out of this game, and said much about these two teams, where they’ve come from, and where they’re headed. And it’s a moment that has stuck with me as the image of the game, even after more obviously significant moments and all the dramatic iconography and one-on-one story lines of the penalty shootout.

It was a play that reminded me of another tackle. As I watched the play unfold, with Sinovic supporting his center back while monitoring the potential pass from Luis Gil, then following it for his interception on Saborio, there was a second of recognition when the sequence finished.

It meant that while looking at the replay on the press box screen behind me, I did so with an afterimage of Sinovic jumping forward, a half-second late, in the Western Conference final against Houston, at almost the exact same spot on the field as the Saborio tackle. In that ghostly moment, as Oscar Boniek Garcia checked past the stranded defender hurtling in the wrong direction before scoring, Sinovic looked like nothing so much as Geoffrey Green’s famous 1953 description of England’s Billy Wright being wrong-footed by Ferenc Puskas “like a fire engine going to the wrong fire.” In the RSL incident, a better balanced Sinovic doused the fire before it could spark.

That moment against Houston was subtly part of the buildup to the final. For one thing, it was one of the more obvious illustrations of the effect the climate could have on a match. As a few press members crowded into Peter Vermes’s office at Sporting’s Swopes Park training ground the Thursday beforehand, the coach had discussed the “miscommunication” before the Houston game that meant an already freezing field got watered before temperatures dropped even further, rendering the field treacherous in parts.

The image of Sinovic skidding helplessly past Garcia, as Sporting fell behind early, had been used more than once last week, as critics of a cold-weather final feared for the telling effects of worse conditions Saturday night. Vermes was adamant it wouldn’t have an effect. But with the idea of MLS switching to a winter schedule having been given a rather high-profile test case by its showpiece game of the season, the possibility of the weather providing a telling moment loomed over the final.

There’s certainly an argument to be made that the weather played its part. Vermes had placed a lot of stock in the field’s undersoil sub-air system and the fact that the pitch wouldn’t be watered this time around. But as temperatures fell close to single digits, it was clear that one side of the field that rarely sees direct sun at this time of year was frozen solid. Teams favored the other side, goalkeepers could not push off properly for saves, and Ori Rosell, the unsung but very important midfield enforcer who has been just as much of a constant as Sinovic this season, was forced out early in the game with a twisted ankle. When Nielsen was beaten for the opening goal, it looked as if he couldn’t get the propulsion to dive anywhere near the ball in time.

But Sinovic stayed on his feet when it mattered most. I’d spoken to him the day before the game and he’d been typically honest about his part in the Houston goal in the previous game:

“It was a poor defensive play by me. I came in a little bit too quick. Should have realized it was going to be slippery and hard, and I won’t make that mistake again. We’re ready for it.”

After the final I grabbed a word with Sinovic in the raucous home locker room and we talked about the game and what it meant to a Kansas City boy who knows the history of this onetime afterthought of a franchise. (“No one knows better than me. It’s awesome.”) Then I mentioned the Saborio block coming on almost the same spot as the Garcia goal. Sinovic smiled in relief at the memory. “It was difficult because there was one side of the field that was very similar to the Houston game, and it was tough, because you had to slow yourself down, but like I said, it was one of the things we were ready for.”

Of course, lessons learned by playing Houston are nothing new for Sporting KC. I’ve spoken with Vermes on more than one occasion about the Eastern Conference final a couple of years ago when Sporting were killed off on a late counter by the Dynamo while chasing a goal. After the match, in a champagne-soaked locker room, Vermes recalled being “very immature against Houston.”

Then I asked Vermes about Sinovic and reminded him of his small game-to-game adjustment between the conference final and MLS Cup, and the contrast between the moment of the Garcia goal and the Saborio interception:

“Yes, that’s right. That’s the great thing about that group: They learn. And they bought into it, and that’s a big reason for success.”

I’ve written twice this season about the recent dynamic between Sporting KC and Real Salt Lake, one of those particular type of rivalries that sometimes appears for a few years in world football then disappears along with the generation that sparked it. In MLS, the circumstances of personnel make those rivalries very rare. I think I’ve used the phrase “institutional knowledge” about both teams this year, and there’s no doubt that the systemic continuity of RSL’s playing and recruitment philosophy, and the cumulative game-management experience of a still-young Sporting KC side are key to their success.

For RSL, losers in two finals this year, but also competitors in two finals that few expected them to get to, their biggest test may be ensuring a similar continuity if/when Jason Kreis leaves for New York. They may also have to face the question of whether the man whose shot Sinovic blocked, Alvaro Saborio, for all his undoubted qualities as a finisher, is going to be the player they build around. “The team is the star,” goes the saying in Salt Lake, and there’s some evidence the team does better overall when Saborio is out.

For Sporting, they have the later stages of Champions League soccer to look forward to early next year along with qualification for the same tournament. They also must cope with the same issues Kreis and RSL have already had to deal with: When you coax your young players up through the ranks, you also coax them through the salary-cap ceiling. At some stage this Sporting team will break up (if the departures of Julio Cesar, Kei Kamara, and Roger Espinoza don’t already represent such a rupture). Some of the lessons from defeats and victories past will leave with them. For now, Sinovic & Co. will return next year as champions and see where the lessons from that takes them.

Leaving the stadium, wincing at the wind chill, I remembered another line from Sinovic about how well Sporting’s trainers look after the players’ conditioning, “making sure little things don’t turn into big things.” I think of that image of Sinovic’s tackle: a little thing on the way to a big thing. It’s what I’ll remember.