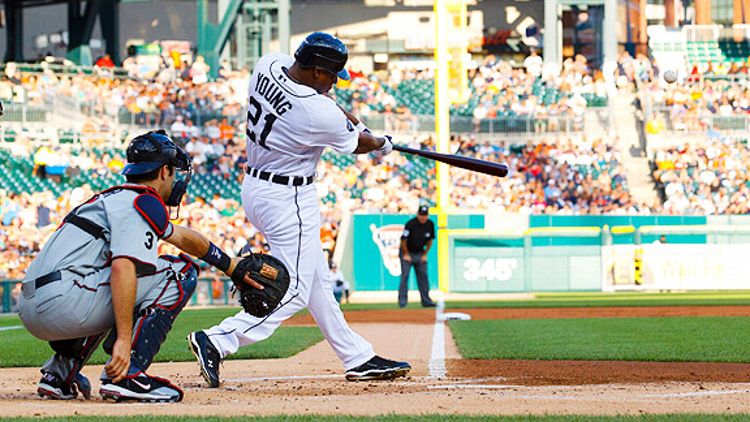 For all the wisdom Branch Rickey doled out as a baseball operator, one piece of advice stands out as the best lesson for aspiring GMs: “Trade a player a year too early rather than a year too late.”

Four years ago, Tampa Bay traded Delmon Young earlier than most people probably expected. The Minnesota Twins just traded him a year too late. The Twins shipped Young to Detroit for Cole Nelson — a lightly-regarded lefty pitching in Class A ball — and a player to be named later. If this strikes you as a piddly return, it should … and it shouldn’t.

In 2003, the then-Devil Rays made Young the top overall pick in the amateur draft. A five-tool player and high school phenom, Young was supposed to be a cornerstone of Tampa Bay’s future. He mashed from day one, hitting 25 homers with a .926 OPS in the Sally League. Promoted to Class AA the next season, he dominated players who were years older. Young’s game wasn’t perfect; he was a free swinger who relied on natural ability and lacked polish. No one cared. Young finished that season by holding his own at Triple-A, hitting .285 with decent pop. He didn’t turn 20 until after season’s end.

At the end of the 2005 season, we didn’t know if Young would reach the heights of the all-time greats. After being named Baseball America’s no. 1 prospect the next spring, though, he seemed destined to be a perennial All-Star and future MVP candidate.

Then the shit hit the fan.

It was shocking that Young chucked a bat at an umpire but not completely unexpected. A known hothead, he’d been suspended the year before for bumping an ump. Tampa Bay put up with it, because a future All-Star who is a dick is still a future All-Star.

Still, the team’s new regime took note. Owner Stuart Sternberg , team president Matt Silverman and de facto GM Andrew Friedman planned to deploy the same best practices with Tampa Bay that they had in their previous careers on Wall Street. Much of that entailed using advanced statistical modeling to find underrated and unexplored sources of talent. But the new guys believed there was value in team harmony too, even if it was tough to quantify. Young still had huge talent. But if that talent started to slip, or if they saw an opportunity to trade Young for a huge return, they’d be ready.

Young hit .316 with moderate power in 86 games, then got his call to the big leagues for the home stretch of the ’06 season, before he could legally crack open a beer to celebrate. His youth notwithstanding, Young put up numbers that seemed to portend big things, hitting .317 in 30 games. He had arrived.

But where most of the baseball world saw success, Tampa Bay saw warning signs. Young struck out 24 times in his first 131 major league at-bats. He walked exactly once. All the natural talent in the world wasn’t going to save a player from failure if he couldn’t tell a ball from a strike.

The next season, Young had what seemed to be a big year. Playing in all 162 games, he hit .288, knocked in 93 runs, and finished second in Rookie of the Year balloting. But the same problems remained. Only six everyday players posted a lower walk rate than Young’s 3.8 percent. Having such a poor batting eye not only suppresses a player’s on-base percentage. It makes it less likely for power to develop, since pitchers can exploit overly aggressive hitters.

Then there was Young’s defense. Though defensive metrics were just starting to become mainstream in 2007, it was becoming increasingly clear that the numbers didn’t back up Young’s strong defensive reputation. If Tampa Bay could find a team that valued batting average, run production, reputation and prospect pedigree over more meaningful results, they were ready to make a deal.

Two months later, Young was off to Minnesota, part of a six-player trade that sent emerging right-hander Matt Garza and steady shortstop Jason Bartlett to Tampa Bay. Since that trade, Garza and Bartlett have combined for 15.7 WAR. As for Young, in the three-plus seasons since the trade, he’s produced 0.9 Wins Above Replacement for the Twins. That makes him the equivalent of a 25th man or a minor league veteran barely good enough to earn a promotion. There were many reasons the Rays shocked the baseball world and surged to the World Series in 2008. The Delmon Young trade was arguably the biggest.

As bad as it’s been for Young in Minnesota, he did find a groove last season. Hitting every day behind a potent group that included Joe Mauer, Jim Thome, and when healthy, Justin Morneau, Young put up fancy bubble gum card stats, hitting .298 with 21 homers and 112 RBI. Yes, the sabermetric revolution had long since taught teams not to obsess over such shiny baubles, and Young was still a terrible defender who was also getting more expensive and closer to free agency. But even the most Moneyballed GM might have taken a look had the Twins shopped Young last offseason.

They didn’t, he got off to a terrible start this year, then he got hurt, and now here we are.

As a stand-alone trade, there’s not much to say here. Young has been pretty bad this season, but he was hitting a respectable .286/.352/.429 since returning from injury a month ago. Meanwhile, Magglio Ordonez is on his last legs, posting a .575 OPS for the season and covering the outfield with all the grace of Don Zimmer. Brennan Boesch’s thumb injury combined with the fork stuck in Ordonez’s back and a tight AL Central race made a minor trade for Young a reasonable, low-risk gamble. Young found out about the trade as the Twins were on their way to Comerica Park to face the Tigers. He switched uniforms and clubhouses and made an instant impact, homering for Detroit on Monday night.

Bill Smith’s tenure as Twins GM has some potential black marks, with the failure of the Johan Santana trade and the mishandling of the team’s shortstop position. The Delmon Young Era in the Twin Cities might trump all of them.

Where are Athletes ... Travelling?