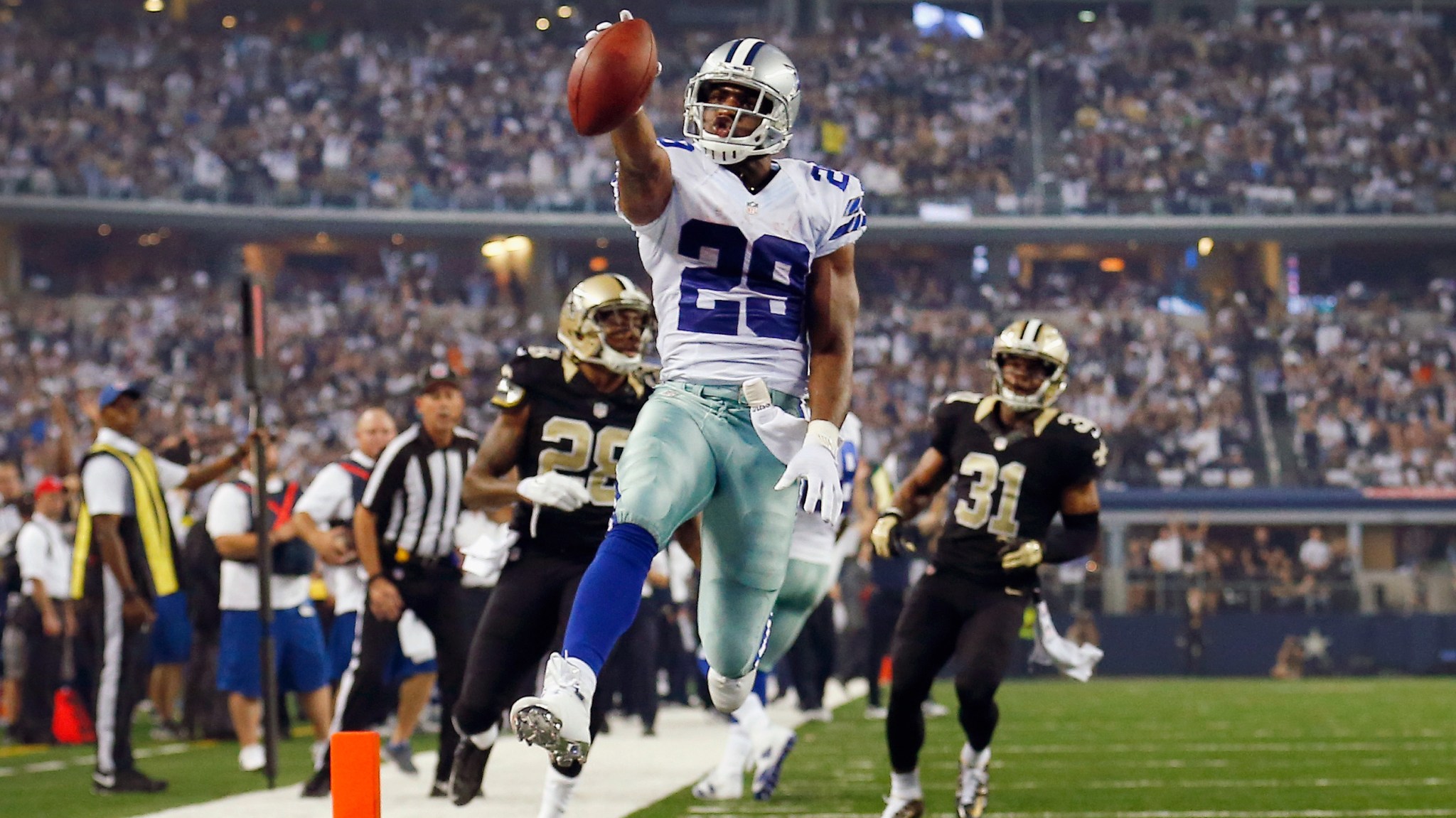 Somewhere between being a decade-long travesty and last Sunday’s victory over the New Orleans Saints, the Dallas Cowboys became a competent football team. Not a Super Bowl team, and maybe not even a playoff team, but a cohesive group of athletes paid to play football for a living.

This is huge. How did this happen? 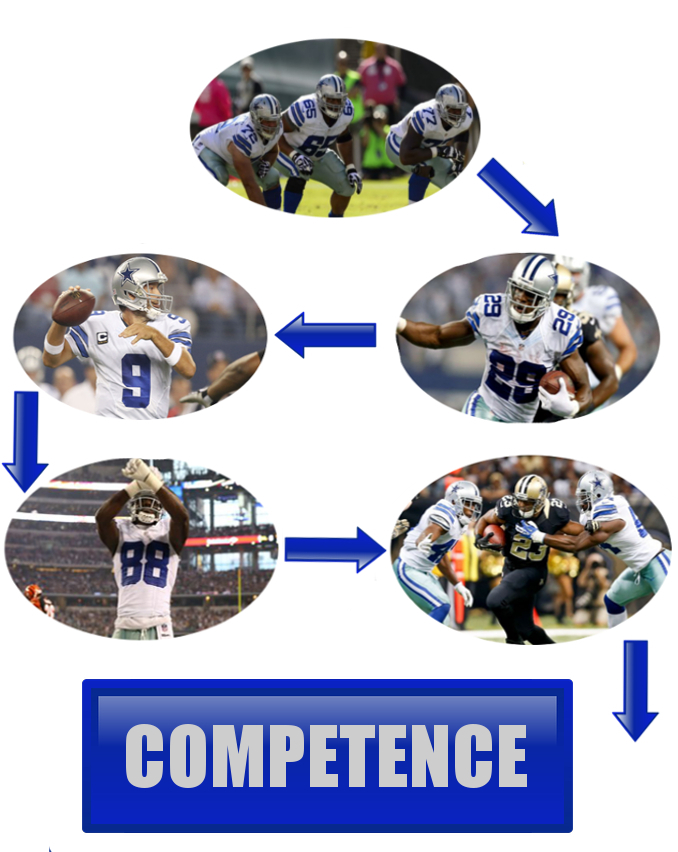 The diagram illustrates a simple trickle-down system — starting with a top item directly affecting the item beneath it, and so on. It’s so easy to understand. You’d think it would take less than a dozen years for a pro football team to grasp it. Let’s take a look at each step individually.

SHOUTS TO THE LANDRY SHIFT.

You wouldn’t know this by watching the Cowboys over the last few years, but an offensive line is the foundation of a sound offense. This year, Dallas has had quite the beast on its hands, and it’s as scary as it is exciting.

It all starts with the young core of Tyron Smith, Travis Frederick, and Zack Martin. These three first-rounders are leading what most would consider one of the best offensive lines in the league. For standing their own against legit defenses, protecting the fragile Tony Romo, and blocking 30 to 50 yards downfield, this crew deserves all the praise it is getting. The group is so good, they’ve managed to get Doug Free back in the good graces of Cowboys fans. Hell, I’ve cursed Free’s name only a half-dozen times in four games.

The biggest accomplishment of this line has been to unlock the potential of DeMarco Murray. Murray’s dominance has been one of the most beautiful football things to watch in this young 2014 season. Against the Saints, Murray’s talents were on full display, with his amazing O-line creating bigger holes than the Bingham Canyon Mine or a Christopher Nolan movie.

Fun fact that can’t be stated enough: Before snagging Smith in 2011, the Cowboys hadn’t drafted a lineman in the first round since 1981. Isn’t that fun to think about and say out loud?

For us Romo apologists, Murray is the answer to our prayers. The pressure of leading America’s Team finally has fallen on the shoulders of other football players. This is great news, considering that Romo’s shoulders are supported by the most brittle back in all of football. Romo not having to throw the ball a quarter of a million times per game is a blessing, and it’s all possible thanks to DeMarco Murray.

How good has Murray been? He is now one of four players to start the season with four straight 100-yard games. The others? The list includes some scrubs like Jim Brown, O.J. Simpson, and Emmitt Smith. Murray is currently on pace to break the single-season rushing record. Even if he falls short of that mark, he’ll surely crack the 2,000 club. I know it’s a bit premature, but …

Murray is giving Romo the freedom he’s needed his entire career. Romo is no longer required to hold big leads by throwing the ball (thus stopping the clock), which sounds completely idiotic but was an actual reality for last year’s Cowboys. When the Saints cut the lead to two scores in the fourth on Monday, the entire Dallas–Ft. Worth Metroplex was shaking in its blue-and-white jerseys. It felt like an all-too-familiar feeling. How many times have we seen Romo throw that life-sucking interception at the worst possible time? Too many.

The outcome was different this time. DeMarco Murray was the man tasked with taking the Cowboys home, as he steadily kept the Saints at bay and ground down the clock.

As great as Romo is at times, he can really struggle passing the ball (see: comment sections in most columns written about him). In the season opener, Romo moved around like your great-grandfather, as he tried to force everything into crazy coverage, resulting in three predictable interceptions.

The Romo that played against the Saints appeared to be the WILY ROMO that we all know and love. Going into the game, the Cowboys knew that Dez Bryant would be double-teamed by Rob Ryan’s defense, per usual. So early on, the Cowboys mixed up a running attack with Romo throwing lasers to Terrance Williams and Jason Witten, building an early Cowboys lead. Romo was so loose, he actually had the longest run of his career, which only strengthens the classic argument: Who needs a functioning back?

Romo’s repeated targeting of Witten and Williams forced Ryan to loosen up a bit on his Dez double-team tactic. And right on cue, THE BEAST WAS UNLEASHED.

Romo wound up going 22-for-29 for 262 yards and three touchdown passes (two to Williams, one to Dez). LONG LIVE WILY ROMO.

I think most of us came into the season thinking the same thing: The Dallas Cowboys defense would be the worst thing anyone has ever seen in the history of the world. I actually played a game with some friends called “Member of the Cowboys Defense or Random Name Found in My High School Yearbook … OR BOTH?”

The Cowboys defense is actually a scrappy bunch. Certainly not great, but they’re just good enough, which is far better than anyone predicted.

Dallas’s defense is helped immensely by its offense. The offense was set up to keep Drew Brees & Co. off the field as long as possible. For the most part, the strategy worked. Whenever the Saints offense finally got on the field, they were met with a well-rested defensive unit full of antsy no-names poised to prove themselves.

After the game, Trent Dilfer broke down the Dallas defense by using words like “disciplined,” which left Dallas Nation stunned. They haven’t heard the word “disciplined” to describe anything Cowboys-related since George Clooney was Batman.

So for the time being, these are your Dallas Cowboys. A slightly lovable bunch of degenerates who have crawled their way to competency. If things continue, get ready to see a lot more of THIS.