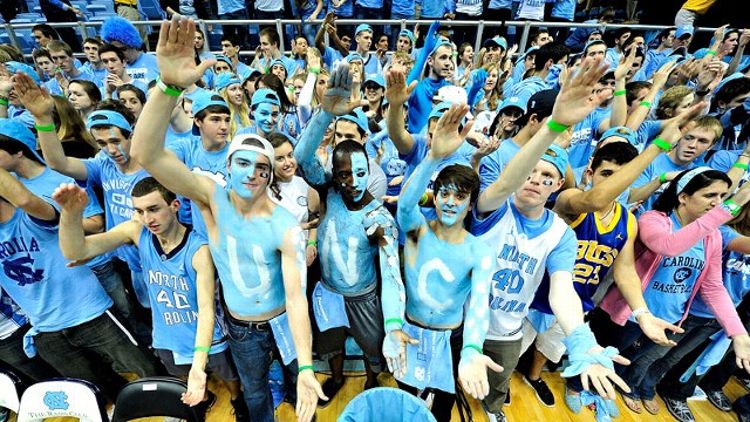 Sports fans can be a savage lot. When it comes to cruelty, is there any group more relentlessly inventive? Chanting in unison, they pick at the heart of the enemy. But in my book, there’s one chant more brutal than any other. It’s worse than insulting someone’s family, worse than hurling the most unspeakable epithet, and worse than mocking a personal handicap. This one cuts the deepest.

“Not our ri-val! (clap-clap clap-clap-clap)”

Can you imagine anything more devastating? Maybe you can. Maybe, despite the bold font I’ve used to make my point, those words look pretty tame. Hear me out. Here’s what that seemingly innocuous little chant says, in friendly list form:

1. Hey, team that is geographically close and with whom we share a contentious history, we’re about to beat you.

2. We know this matters to you. You wanted it bad.

3. It doesn’t matter to us. We don’t even consider you our main opponent. We’re just casually beating you into the ground, barely noticing you, and tomorrow, we won’t remember the final score while you sit crushed, turning over this loss in your mind. You are pathetic.

Is it starting to make sense? Bear with me. Imagine you’re about to ask a member of the opposite sex out on a date. (Notice my gender-neutral construction here, which assumes that at least one female will read this article. Hi, grandma!) Which response would be more gutting?

A. “Hey, I’ve given it a lot of thought, and considered our personalities and chemistry, and I just don’t think it could ever work.”

Answer B, right? B all the way. Because that’s when you realize you just don’t matter. While you fill up a composition notebook with sad poetry while listening to “Tender” by Blur (totally guessing at this one, never been rejected before), he or she is off at the mall smoking cigarettes and flipping off cop cars. Just being cool as hell. That’s a psychological fist strike to the kidney on a cold day.

I’m sure the “not our rival” chant is widespread, but I’ve heard it in person just three times. The first time was at Cameron Indoor Stadium, when Duke was about to beat Maryland. The other times were the last two years at the Dean Dome, as UNC was about to beat NC State. The first conclusion I draw from this is that Duke and Carolina are like angry co-dependent lovers who can’t stay apart. By chanting “not our rival” at opponents, they’re really singing a perverse love song to each other. It’s almost touching.

I don’t know if the Wolfpack wants my pity, but man, they’ve got it. Because there is no other rival for them than North Carolina, and boy, howdy, it has not gone well recently. In fact, after Thursday night’s 74-55 drubbing, the Pack has now lost 17 of 18 games to the Tar Heels, dating back to 2003-04. Overall, UNC enjoys a 145-75 edge. What that means, obviously, is that nobody on the Wolfpack roster has had the experience of winning against North Carolina. Only one Wolfpack coach, Everett Case, has compiled a winning record against Carolina, and only one UNC coach, Matt Doherty, has left with a losing record against State.

Now it’s time to bring in the socioeconomic angle. Can I just interrupt myself a moment here to relay a Facebook status a friend of a friend posted after Thursday’s win? Said friend is a Carolina fan, as you’ll see.

“The difference between culture and agriculture is 26 miles and 19 points.”

Let’s start with Duke. If you’re among the hordes of people who hate Duke, you’ve probably heard it called “The State University of New Jersey at Durham.” And that’s the perception in a nutshell. Duke is full of outsiders who come into the state, get an expensive education, and then leave for all parts north. Carolina treats Duke as elitists, and Duke looks down on Carolina as locals who couldn’t make the cut at Duke. NC State, on the other hand, is the school of the common man. And here’s where the Tar Heel position gets paradoxical — in this relationship, they’re the elitists. They look down on their Raleigh brethren. NC State, meanwhile, holds an understandable bitterness and resentment toward Chapel Hill.

(In case you were wondering, the Duke-NC State relationship is negligible by comparison. The fan bases don’t like each other, by any stretch, but the relationship is far less fraught than the others.)

So, a quick recap: Carolina has now beat NC State 17 of 18 times in the most important sport in the state. At the same time, Tar Heel fans turn up their noses at Raleigh and pretend it doesn’t even matter. Are you starting to see why “Not our ri-val!” is such a heartbreaking chant?

This is why signs get painted.

The past few seasons have not been kind to NC State, even outside the Carolina rivalry. During Sidney Lowe’s tenure (which began in 2006-07), the Wolfpack’s best ACC record was 6-10, and they never made the NCAA tournament. Before that, Herb Sendek led them to five straight tourney appearances, and one Sweet 16 berth in 2005. Lowe accepted a buyout last March, and Thursday, new coach Mark Gottfried endured the first State-Carolina rivalry game of his career.

I spoke with Gottfried the day before the game, and asked the same question I posed to Maryland’s first-year coach, Mark Turgeon, on the eve of his first game against Duke. Is this the most intense atmosphere you’ll ever have experienced?

He admitted that the rivalry was lopsided, and that one of his main goals was to level out the disparity over the next couple years. And he knew that — along with making the NCAA tournament — he’ll be judged on his success against the Tar Heels.

“I’m sure there will always be a part of your legacy as a coach here in how do you against North Carolina,” he said. “There’s no question.”

He told me that the media interest for the game had eclipsed anything he’d experienced so far at NC State, which was no surprise. But he was being humble. Part of the reason they cared so much was that Gottfried has done a fantastic job in his first year at the helm, compiling a 15-5 record and starting out 4-1 in the ACC. He’s extracted more from many of the same players Lowe had at his disposal last season, and all five starters are averaging double digits. As ridiculous as it might have been to think this way before the season, NC State came in with a legitimate shot to beat Carolina.

And after the game? Well, after the game it all seemed less fun. It was my unenviable job to ask Gottfried the annoying question about how hard it was for his players to go through their entire careers without getting a rivalry win.

“I’ve got no idea,” he said, suitably annoyed. “I’ve been here for one game. I can’t answer that question.”

So, about that game. Carolina loves to run, and so does NC State. And run they did, right up to the point when the Wolfpack got run off the court. The Heels looked like the national championship contender we expected at the start of the season, even without injured guard Dexter Strickland, and coach Roy Williams admitted they played excellent basketball. Kendall Marshall, sporting more facial hair than normal, had his usual array of spectacular passes at impossible angles, and Tyler Zeller scored 21 points and grabbed 17 boards. (“We’re starting to see a little bit of animal in Z,” the always delightful Marshall said after the game.) John Henson, Zeller’s frontcourt mate and one of the best defenders in the country, established early that he would not tolerate forays into the interior. He also showed off an impressive left hook, and came the closest I’ve ever seen a player come to committing offensive goaltending on himself. It was a bigger, stronger, faster situation all around, and the game was over by halftime.

It was also a jam session. Is that what kids are into these days? Do they still like a good jam sesh? Then put down your skateboards and feast your eyes on this YouTube video, which also includes my two favorite Marshall dishes of the game:

You might have already seen NC State’s lone highlight, but if not, enjoy. Aside from that, it was a poor shooting night that started off 8-of-32 in the first half. The Heels fans basked in the glow of a certain victory, and when the tension wore off, it was only a matter of time before the witching hour, when joy would turn to taunting.

With about a minute left, the chant began. It was directed at the small fan section behind the NC State bench, and it wasn’t as vociferous as I remember from last year. Had Carolina finally taken pity? Doubtful. The words were still crystal clear: “Not our ri-val.”

As if it proved the point, the UNC student body shouted the words “Go to hell, Duke!” at the end of the fight song they sang after the final whistle. If there’s one piece of trivia that encapsulates the state of the rivalry, it’s this — before the early ’90s, those words used to be “Go to hell, State!”

And what about the Wolfpack? A despondent Scott Wood, the junior guard who recently set a conference record by making 58 consecutive free throws, spoke with reporters after the game. One asked him how it felt, all this losing to Carolina.

“I don’t know,” he said. “Has your wife ever cheated on you? That’s probably about how frustrating it is.”

It doesn’t quite make sense, but, then again, yes it does.