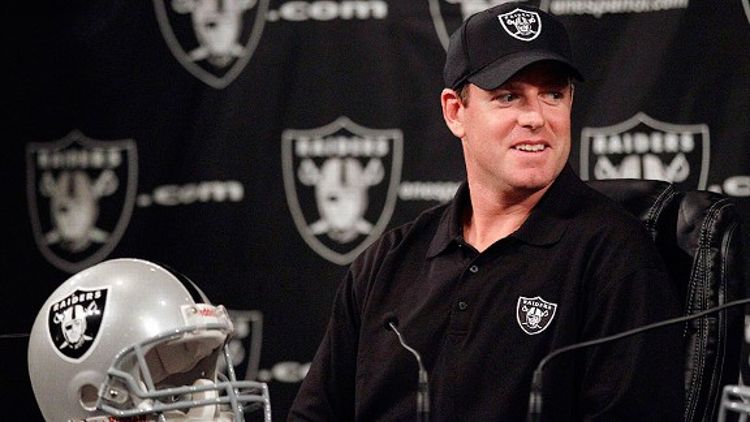 The NFL’s trade deadline is supposed to be a day of rest. Since teams are generally loathe to make a huge acquisition and be forced to teach a player their playbook in midseason, the trade deadline is usually so boring and uneventful that it’s actually one of the few nights each year Adam Schefter actually sleeps.

And then Jason Campbell fractured his collarbone. Campbell was holding onto the hope that he would be able to come back in six weeks, but when Tony Romo suffered a similar injury at the same time last season, he wasn’t able to come back. With Kyle Boller as their nominal starter, the Raiders chose to act by dealing a first-round pick in 2012 and a second-round pick. in 2013 to the Bengals for holdout quarterback Carson Palmer. Quick note: The second-round pick can become a first-rounder if the Raiders advance to the AFC Championship Game this season. If they get that far, we suspect they won’t care that it’s two first-rounders.

The Raiders paid more than the Texans did for Matt Schaub, who was acquired for a pair of second-round picks and a swap of two spots in the first round. The Chiefs only had to give up a second-rounder for Matt Cassel. The Eagles got a second-round pick and Dominique Rodgers-Cromartie for Kevin Kolb, and acquired a second-rounder and a fourth-rounder for Donovan McNabb. It’s not clear to me that Palmer is really a much better quarterback than McNabb. The last time a quarterback was traded for this much was when the Bears dealt Kyle Orton, two first-round pick, and a third-rounder to the Broncos for Jay Cutler and a fifth-round pick. At that time, Cutler was 25 and coming off of a Pro Bowl season. It’s hard to imagine that Palmer, who turns 32 in December and hasn’t sniffed a Pro Bowl since 2006, is worth more than Cutler. And with that in mind, it’s hard to imagine that the Raiders did anything but overpay for Palmer.

The argument in favor of overpaying for Palmer now is that the Raiders are ready to compete this year, and at 4-2, they’re still capable of winning the AFC West and hosting a playoff game this year. Maybe it’s true. Football Outsiders gives the Raiders a 66.8 percent chance of making the playoffs, while the Las Vegas Hilton saw the Raiders’ odds of winning the Super Bowl go from 40:1 down to 30:1 after the Palmer trade was announced.

Through six games, though, they’ve only managed to outscore their opposition by ten points. That’s the mark of a team that should be about .500. They’ve played four games decided by a touchdown or less and won three of them. Their margin of victory this week came from a fake field goal. And while they picked up an impressive victory over the Jets in Week 3 and beat an Andre Johnson-less Texans team in Houston in Week 5, they still have to play the Chargers twice, travel to Green Bay , and host the Bears and Lions. Even if Palmer plays well, this team might not be good enough to make the playoffs.

The bigger question, though, is whether the Raiders are actually getting the franchise quarterback they think they’re getting. Quarterbacks tend to age slower than players at other positions, so acquiring a 31-year-old isn’t necessarily a bad move, but Palmer hasn’t had a very traditional career path. Because he entered the NFL at 24 and sat out his entire rookie season, Palmer has only played about six full seasons as a pro. And while many people remember the torn ACL that Palmer suffered in the 2005 playoffs, the more debilitating injury for Palmer has been the elbow injury he’s been dealing with since 2008.

In 2008, Palmer suited up for just four games before sitting out the remainder of the season. News reports that year perpetually described him as a few weeks away from returning, but rumors also had it that Palmer needed Tommy John surgery on his ailing elbow. Eventually, neither story was true: Palmer never came back, but he also never got the surgery. Since the beginning of that 2008 season, though, Palmer simply hasn’t been the same player. By literally every statistical measure imaginable, Palmer is a worse player. He is less accurate, more conservative, throws more interceptions, and takes more sacks. You can argue that he had better receivers during the earlier time period, but the struggles of Chad Ochocinco and T.J. Houshmandzadeh since leaving the Bengals suggest that it was Palmer making them look good, not the opposite.

CARSON PALMER BY THE NUMBERS

While you might suspect that Palmer’s elbow injury would be particularly obvious on throws downfield, he was actually better in 2010 throwing deep than the league average. When Palmer threw passes 20 yards or more in the air, he was 18-of-55 (32.7 percent) for 649 yards (11.8 yards per attempt) with four interceptions. While his completion percentage was just below the league average of 33.3 percent, he was just above the 11.6 yards per deep attempt average put up by the rest of the league’s quarterbacks. And while Palmer threw a deep interception once every 13.8 attempts, the rest of the league was throwing them once every 11.8 attempts. So he’s not as bad a fit for the Raiders’ vertical offense as you might have imagined, even with the elbow woes.

While the post-injury Palmer would likely be an upgrade on the dreadful Kyle Boller, Boller has one advantage on Palmer: He knows the playbook. Hue Jackson might have been USC’s offensive coordinator while Palmer was there in the late-nineties, but that doesn’t mean that the Raiders are running a similar sort of offense with the same language and personnel. When the Cowboys dealt a similar bounty to the Lions at the trading deadline in 2008 to get Roy Williams, he failed to make an impact, catching just 19 passes in 10 games. The biggest reason was that he had to learn the team’s playbook on the fly to avoid lining up in the wrong places or running the wrong routes. Palmer’s responsibilities are far beyond what Williams would have been expected to know, and with head coach Hue Jackson teasing that the Raiders will start Palmer this Sunday against the Chiefs, it’s impossible to imagine that Palmer will know more than the absolute essentials of his playbook.

The new Raiders quarterback will get a bye week to study after this Sunday’s game, but Palmer also has to put up with the rust of not playing or practicing with a pro team while quickly gathering some sort of rapport and timing with his new receivers. That just doesn’t happen overnight, and while the Raiders may see Palmer as their savior, it’s hard to envision him leading Oakland into the playoffs this season. And if that’s the case, it’s impossible to justify giving up such a bounty for him at the trading deadline.

The Rams’ move to acquire Brandon Lloyd, on the other hand, makes much more sense. An 0-5 team acquiring a veteran receiver doesn’t exactly smack of logical thought on the surface, but bear with us for a moment. Remember that Lloyd’s breakout season after years of mediocrity came last season in Denver, where his offensive coordinator for most of the year was … Josh McDaniels, who is now the offensive coordinator for the Rams. Lloyd should be able to step into the Rams system immediately as a starting wide receiver and make an impact as a downfield receiver with superb hands. The Rams’ four primary receivers this year had previously been Danario Alexander, Brandon Gibson, Mike Sims-Walker, and rookie tight end Lance Kendricks. Those four players have combined to catch just 44.9 percent of the passes thrown to them, and they have close to 15 drops between them. Lloyd’s caught 58 percent of the passes thrown to him this year by the combination of Kyle Orton and Tim Tebow, and he has a pair of miraculous catches that were narrowly ruled out on review. He’ll be an enormous upgrade for Sam Bradford.

In addition, the risk here is far lower. The Rams gave up a fifth-round pick for Lloyd, who is in the final year of his deal. They would have likely targeted Lloyd in free agency anyway, and can easily dispatch him now if he proves to be a bad fit in their locker room. And while the Rams are 0-5 and have to play the Cowboys and Saints over the next two weeks, the second half of their schedule is remarkably easy. While the 49ers currently look like a playoff team, any slip from them could create an opportunity for the Rams. Nine wins may not win them the a wild-card spot, but they could sneak into the NFC West picture if they get a few breaks and take advantage of their schedule. At the cost of a fifth-round pick, this was a risk worth taking.

The Rams also cut Sims-Walker as part the corresponding roster move on Tuesday. He quickly signed with his former team, the Jaguars, who are in desperate need of live bodies for Blaine Gabbert. Both Sims-Walker and the Jags were happy to part ways during the offseason, but true love always finds its way back.

In the third and final trade of the day, the Eagles decided to repeat the transaction they pulled off at last year’s trade deadline, acquiring Jerome Harrison in a swap of backup running backs. While they sent Mike Bell to the Browns for Harrison last season, Philly sent Ronnie Brown to the Lions to acquire Harrison this week. We’ve repeatedly talked up Harrison as a criminally underrated back, but he seems to make enemies wherever he goes. He went from being the Lions’ primary backup to a healthy scratch in just a few weeks, and Detroit chose to get rid of him before having to cut him off their roster. Since he already knows the Eagles playbook, he could immediately step in as the primary backup to LeSean McCoy; his short, powerful frame makes him an effective goal-line back. As usual, we will note that his entire NFL production amounts to one incredible season: 356 carries, 1,681 rushing yards, and 70 catches for 490 yards.

The Brown aspect of the deal might be the more interesting aspect, though. Starter Jahvid Best has struggled this year, and he suffered his second concussion of the season on Sunday. Rumors circulating this week suggested that Best might be placed on injured reserve, which would cause him to miss the remainder of the season. The move to acquire Brown would give the Lions the all-purpose back that could fill in for Best while crucially avoiding the problem of being Jerome Harrison. Brown has his own injury issues, but as long as he avoids throwing the ball as he falls down inside the two-yard line, he’s likely to end up with at least part of the snaps at halfback in Detroit.