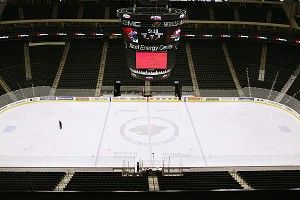 We’re less than two weeks away from the opening day of the 2012-13 NHL season, which can only mean one thing — the players are locked out. It’s time to take a closer look at what the NHL lockout is all about and when we might see it come to an end.

So are we heading toward another lost season?

I don’t think so. Let’s start with this: It’s not particularly surprising that we’re at the end of September with no new CBA and a canceled preseason. We have known for a long time that these labor talks would be a bit ugly for one reason — the NHL owners are seeking to significantly reduce player salaries upon the expiration of an agreement that already lowered them by 24 percent and instituted a hard cap. The players are just trying to hang on to what they had.

The good news is that this is not the type of fight — one in which each side primarily wants a bigger piece of the pie — that typically leads to extended work stoppages. Yes, there is a lot of money at stake, but the two sides in these types of labor negotiations usually figure out a way to divide the money before missing a significant number of games (See, for example, the 2011 NFL lockout).

This time around, the NHL is in much better financial shape. Revenues are rising to record levels, the league has a healthy national television deal, and a majority of the owners are not better off missing an entire season than they are playing under last year’s rules (or even under the rules last offered by the players). In other words, nobody is claiming that the system is broken. The players are not seeking to undo the cap, and the owners just want more money from the system. Because neither side is seeking a sea change, essentially the two sides are just fighting over how to split the revenue pie. These types of fights have led to missed games in the past, but they haven’t led to season-killing (or partial-season-killing) work stoppages.

If 16 to 18 owners are losing money, how can the owners collectively sustain a lockout?

The national television deals with NBC and CBC will help. Even if games are not played next year, NBC and CBC will still pay the league the $200 million and $100 million, respectively, due under their contracts. Although the NHL will have to pay back the networks for lost games when those contracts expire (2013-14 for CBC and 2020-21 for NBC), the rights fees will provide a cushion for the owners this year. Remember, though, the NHL relies more heavily on revenue from ticket sales than any other league, and those ticket sales will be lost during a lockout. The average NHL team received about 50 percent of its revenue in 2010-11 from ticket sales. In contrast, the average NFL team gets less than 25 percent of its overall revenue from tickets, the average NBA team gets 33 percent, and the average MLB team gets 25 percent. So there will come a point where the owners start to feel financial pressure. This is not 2004-05, when a large number of owners were better off canceling the season than playing under their old financial model.

Wait a minute, didn’t a federal judge hold that the NFL violated the law by negotiating a clause in their television contracts that required the networks to pay them during a lockout?

Does the NHLPA have any weapons to counteract the lockout?

Yes, the players have a few weapons in their arsenal. First, they can choose to use the “nuclear weapon” of dissolving their union and filing an antitrust lawsuit against the NHL. This tactic was used by both the NBA and the NFL — with mixed results — in their lockouts last year. As of now, there is no indication that the NHLPA plans to dissolve their union. (It is interesting to note that Don Fehr did not have access to the dissolution/antitrust litigation weapon for much of his tenure as head of the MLBPA because of Major League Baseball’s anomalous antitrust exemption, which was whittled away in 1998.)

The Quebec Labor Board rejected the NHLPA’s request for emergency relief and will hold a full hearing sometime in the next several weeks. The Alberta Labor Board heard arguments from both sides last week, and we await their decision. A favorable result in either or both of these cases won’t end the lockout for all 30 teams, but they will ease the burden on the players for those three teams and could present an important symbolic victory for all of the players.

How is it possible that the lockout can be legal for 27 teams but illegal for three of them? That just doesn’t make any sense, does it?

Under U.S. law, no, because federal labor law would trump any differences in state labor laws. In Canada, however, local provincial codes and laws are enforceable, even if they would interfere with the uniform-application labor laws across the country or countries. Although the NHL has claimed that the NHLPA’s legal challenges are “a joke” and that the lockout should apply to all 30 teams, parties have had some success with similar legal challenges in the past.

For example, the Ontario Labor Relations Board has previously held that Major League Baseball could not lock out its umpires in Toronto — though the lockout was clearly legal in the United States — without first complying with Ontario law (i.e., without first meeting with a “conciliation officer” or mediator). The board reached a similar result in preventing the NBA from locking out its officials in Toronto. Here’s part of the board’s explanation for its ruling:

Does this mean the NHL players will have the same success? Not necessarily. And, even if they win, it will not necessarily mean a quick end to the overall lockout (though a three-team league would set up a mean home-and-away-and-away schedule for the season).

That’s a tough one. They both wow you with their theme songs and computer voices announcing the names of the games. (Just try to watch this and not walk around the house yelling “DOUBLE DRIBBLE” for five minutes. I dare you.) They both had state-of-the-art graphics and realistic sound effects. (Wait, that’s not what a dribbling basketball sounds like?) Blades of Steel had control-your-own fights (NHL arenas really ought to think about putting up “power” meters for each player during fights), while Double Dribble had close-up dunks. In my book, the tiebreaker goes to Double Dribble for its realistic game play — without that game I never would have perfected my turnaround fade-away 3-pointer from the corner.