The Comedifan: Not Just the Funny Guy in Your Section 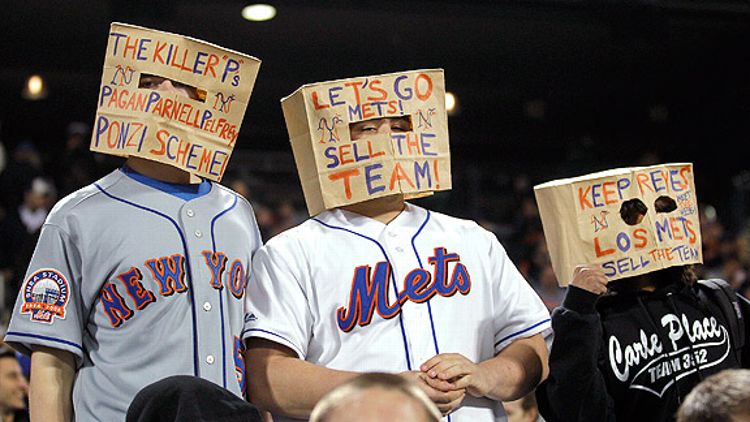 [Ed. note: this piece is entirely fictional and should be read in the spirit of “The Curious Case of Sidd Finch“]


Late autumn is when baseball honors its own, handing out hardware in recognition of the past season’s greatest individual achievements. For all the awards given out this postseason, there will be nothing for fans, no Cy Young of the seats, no Gold Glove of the grandstand.

If there were a Most Valuable Fan, no baseball buff would have a fuller trophy case than one longtime New York Mets partisan. He is baseball’s greatest “comedifan.”

Five or six confused baseball fans peer into the New York sky, searching for the toucan flying around Citi Field. The regulars in Section 512 know better: it isn’t a bird. It’s a Dominican teenager wearing a colorful plastic beak. El Pico has been to every game this season.

Two rows back, Steven Weissman cracks open a peanut and chuckles. “There’s one in every section,” he says, wiping dusty shells off the front of his Mets windbreaker. Weissman should know: for the last three decades, he’s been a comedifan.

Comedians first, fans second, comedifans go to sporting events and tell jokes to whoever happens to be sitting nearby. They make clever observations and funny sounds; many use props. On this crisp September afternoon, Steven Weissman clanged his last cowbell. The great comedifan has just worked his final game.

Weissman won’t officially announce his retirement until after the World Series, so there will be no video tributes, no ceremonies on the field, and no curtain calls today. “I don’t want to draw attention away from the players on the field,” says Weissman. “They’re the real stars.”

As shadows descend on the upper deck, the sun setting on his career, Weissman offers El Pico a few words of encouragement. “You’re part of a proud tradition,” he tells the teenager, who appears startled and slightly bewildered, likely overwhelmed by the history of the moment. Weissman hands El Pico the slide whistle he plays after strikeouts: the torch has been passed.

Steven Weissman has always carefully cultivated an aura of anonymity. “We’re a lot like umpires,” he says of comedifans. “You only notice us when we’re bad.” To Weissman, a comedifan’s wisecracks and humorous cheers should be as much a part of the natural rhythm of the game as balls and strikes, outs and innings.

Weissman learned his trade from comedifans he calls “the legends,” performers like Detroit’s Kazoo Guy, Chicago’s Rainbow Wig Professor, and Los Angeles’ Goofy Grandpa with a Skillet and Two Spoons. They knew very little about each other’s personal lives (“I think Kazoo Guy invented some kind of important laser,” says Weissman) but their bond was unbreakable.

“We’ve all had beer poured on our heads and popcorn thrown in our faces,” he says, smiling at the memory of being pelted with snack foods. “But we’re not going anywhere.” According to Weissman, comedifans have been around nearly as long as athletic competitions themselves.

He tells the story of the first comedifan, who dates back to the waning days of the Roman Republic. Watching a chariot race at the Circus Maximus, the ioculator ludi turned to his neighbor and said, “You call this a circus? You should see the Roman Senate!” The practice of making witty asides to fellow ticket-holders continued unabated for the next two thousand years.

Steven Weissman’s own career began in his hometown of Commack, New York, when he was cut from his high school baseball team. “I was afraid to slide,” he says, his face tightening at the memory. “I never learned how.”

Devastated, Weissman turned to magic. Doing coin tricks in the stands at the school’s ball field, he was bit by the performance bug. By his senior year, the ambitious teenager sought a bigger stage—and quickly found himself on one of the biggest.

“In the early ‘80s, everyone wanted to be working central Long Island,” says Weissman, referring to a period when the Islanders were winning four straight Stanley Cups and Nassau Coliseum was always filled to capacity. Weissman would go to every home game. “It was like doing Carson every night,” he says.

Baseball was Weissman’s true love, so he started putting in work a few miles to the west, in the nearly-empty upper deck of Shea Stadium. The terrible Mets teams of those years provided Weissman with ample fodder, proving the old adage that bad teams make good comedy. Watching the Mets, Weissman learned the fundamentals: the paper bag over the head, the self-pitying sign, how to make the sad trombone sound (“wah-wah”) without an actual trombone.

As the Mets improved, Weissman was soon regularly performing for a packed house. Even though only those fans sitting closest to Weissman could hear his routine over the noise of the crowd, the comedifan felt as if he were doing his act for the entire stadium. Intent on improving his material, Weissman began to look beyond the baseball diamond for inspiration.

“I made my name doing baseball but I cut my teeth doing hockey,” he says. “I knew there was a lot to learn from other sports.” Weissman started using baseball’s off-season to practice among comedifans of winter sports. “Like when the Beatles went to India,” says Weissman.

On the road, Weissman achieved a level of notoriety unfamiliar to most comedifans. During an Air Force football game, he appeared on regional cable TV holding a patriotic sign celebrating the service academy’s high-flying offense (“These Colors Don’t Run—They Pass”). He was featured in a Philadelphia newspaper after a group of children at a 76ers game attacked him. And then there were the perks.

A vendor at Dodger Stadium once gave him two Dodger Dogs, even though he’d only ordered one. At an Oakland Raiders preseason game, a drunk woman offered to have sex with Weissman if he helped her remember where her friends were sitting. And the comedifan was on a first-name basis with nearly every batboy in the American League. (“Batboys have their first names printed on the back of their jerseys, but a lot of them knew my first name, too,” he says.)

Weissman even began building his family on the road. He met his wife Amanda at a college basketball game, when she agreed to let him saw her in half during halftime. (Magic remained part of Weissman’s act.) His son Keith was born at a tailgate for a Georgia football game, where Weissman was opening for a bulldog who barked in harmony with a trumpet.

Even after settling his family in New York, Weissman was still spending nearly every weekend on the road. All of the traveling eventually put a strain on Weissman’s marriage. “It wasn’t so much the time away,” says Amanda Weissman. “Steve was spending all of our money on plane tickets.”

(Comedifans don’t get paid for their work, because unlike professional comedians, comedifans aren’t actual comedians. Steven Weissman supports himself as a tax assessor for Suffolk County, New York.)

When he turned forty, Weissman promised Amanda he would retire after his fiftieth birthday. He kept his planned retirement a secret from everyone except his wife, his son and his season-ticket rep in the Mets office. “I was sorry to hear that Steve wouldn’t be renewing his season subscription,” says the Mets employee. “But he really didn’t have to tell me ten years in advance.”

In the twilight of his career, Weissman focused on mentoring younger comedifans. “These kids were raised on SportsCenter,” Weissman says of the comedifans he took under his wing. “They had no idea how to work a live room.”

Weissman admonished his protégés to tread lightly with reference humor. He speaks with particular disdain about one up-and-coming comedifan whose entire act consists of wearing a Hartford Whalers jersey and repeating the name “Dikembe Mutombo.” Weissman also shuns pop culture references entirely, disdainfully pointing to one contemporary in Cincinnati who often tries to lead his section in a round of “Who Let the Reds Out.”

In addition to his mentoring duties, Weissman has also taken advantage of his platform as a comedifan to speak out on issues that matter to him. Weissman traveled to the Women’s World Cup and used his act to criticize China’s Internet policy, praise the European Union’s decision to bail out Greece, and express solidarity with the protestors of the Arab Spring. For his efforts, he was dubbed “like Jon Stewart or something like this” by a German man sitting next to him in the stands.

Like Michael Jordan, Weissman retired at the top of his game. He’s very much looking forward to attending a sporting event as a civilian, without having to worry if security will confiscate his plastic megaphone—but that’s not what excites him most.

For the first time in many years, Steven Weissman won’t be spending the winter in Florida, preparing for the upcoming baseball season like his favorite players, practicing bits like they practice bunting. Instead, Steven Weissman will be holding his own spring training. Keith Weissman wants to try out for his high school baseball team next year, and his father is going to teach him to slide.

Previously from David Parker:
Why Jose Reyes Shouldn’t Give the Mets a Hometown Discount

Matt Kemp Will Be A Rich Man On A Mediocre Team